Knights of the Silver Drake


So far, my army of Hochland only has foot troops. Now admittedly that makes sense for an army that spends most of its time in the Drakwald Forest, but I’ve already mentioned that the army’s general will be Erhard von Rüdiger, the Grand Master of the Silver Drakes.

Well obviously, I can’t have a Templar Grand Master and not include a regiment of his knights, or in this case, Knights of the chapter’s Inner Circle. In this post, I have pretty pictures of the first four (of eight). And some of the Order’s backstory. Because yes. 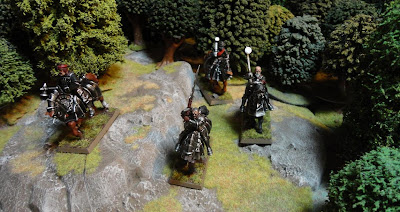 The Empire Knights kit is a relatively dated kit now, but has aged comparatively well. They’re pretty much historically accurate models in heroic scale (hello, Perry twins), but I feel like their helmets make them look like a poor man’s Brettonian. With the Middenheim army’s Blazing Suns, I got around this by using pistolier/outrider heads to Germanise those dudes right up. However, I wanted the Silver Drakes to have their own look, and once I’d written their backstory, I realised that the pistoliers/outriders just didn’t have the right look for them. They’re a very no-frills order who would most probably be frowned upon by the likes of the Reiksguard (although I imagine the White Wolves would have big love for them).

Lest ye were wondering, here’s the short version of their backstory:

The Order of the Silver Drakes are a small chapter sworn to protect the inhabitants of the Drakwald Forest from the predations of beastmen, goblins, and everything else that lurks in the woods. The job of patrolling the forest roads falls to Hochland and Middenland’s soldiery, and whilst the Silver Drakes have been known to assist these patrols, their modus operandi is to seek out leaders among the forest denizens and slay them, be they cunning Goblin leaders or hulking Doombulls, thus trapping the foe in a constant state of internal power struggles and taking the pressure off Empire settlements.

Lances are of little use in the dense terrain of the Drakwald, and so the Silver Drakes employ a variety of cavalry hammers, great hammers, and even zweihanders. They will, if terrain is too dense, dismount and engage on foot, although generally they prefer the impact and manoeuvrability that comes with a warhorse. 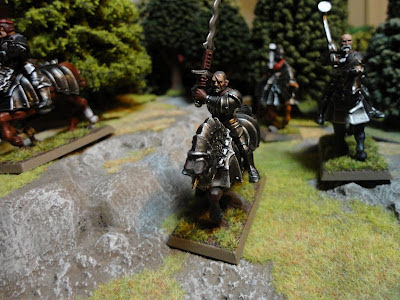 Unlike many (but not all) knightly orders of the Empire, the Silver Drakes do not require that aspirants be of noble birth. Through great feats of arms and honourable conduct, anyone can be recruited. This has led to the Silver Drakes being regarded by some as little more than a band of ruffians, and the rarity with which they commit to aiding patrols has led many a bitter state trooper to believe that the knights are interested only in the glory that comes with killing infamous leaders rather than standing at the coal face with everyone else.

As for the origin of the Silver Drakes' name, or information on their Grand Master, I shall leave that for another time.

Until I have over two thousand points, I’ll probably only have the one regiment in my army. However, as their Grand Master is the general, it seemed only right that the regiment in question should be the Order’s Inner Circle. This meant I wanted them all to be individuals; every member of the unit has a different weapon, and a different head. They’re a kitbash of the Knightly Orders, State Troops and Greatswords boxes. It just would’ve seemed wrong to have a unit of “Inner Circle” knights without them looking less regimented than your average band-o-cavalry. 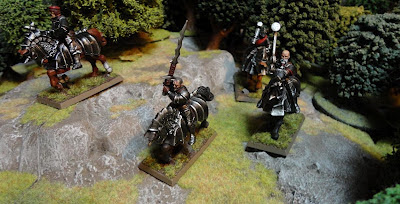 Of course, everything has its hurdles. For these guys, it was a faulty batch of plastic glue from GW. I built them, and a week later, they started falling apart. Plastic models aren’t supposed to do that. Disappointed, and a little miffed, I picked up some replacement glue from GW (they were very civil, and replaced my glue for free). Unfortunately, when I came to stick the grass on this week (months after painting these first four, I shame-facedly confess), this is what occurred:

Yeah. GW make beautiful models, but I no longer trust them to make poly cement. Other kits that fell apart thanks to the two bad batches of plastic glue include: a tactical squad, thirty orks, a scratch-built warbuggy, five Grey Knights, a fortified manor, and all forty of my Hochland State Troops. To re-glue these models, I have to shave off the crystallised plastic glue first, a very time-consuming process. I just gave the tactical squad to Jen, who then spent an entire day restoring them to their former glory. To cut a long and inventive list of expletives short, I have switched to Humbrol glue, and it is both reliable and significantly cheaper. Thank you, Humbrol. You stick my world.