Last week, in an optimistic spasm of idiocy, I said Maisey and I would finish refurbishing the Beard Bunker’s  tired old fail-fest of a Realm of Battleboard over the weekend. Pinning myself down to a deadline has previously resulted in my being late by over two months. I thought myself a fool. And yet, behold: 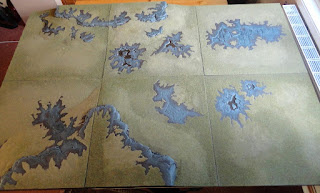 This whole... on time thing is a bit off-colour for the Beard Bunker. It’s probably Maisey’s fault. He’s the organised one. I can’t even find my own elbow half the time.

Anyway, in an emphatic departure from its predecessor, we’ve gone for a late summer look to the grass on this board. It’s a bit greener in the flesh than it is in these photos, but still, the overall effect we were aiming for was more dead and yellowy than your standard gaming board.

I’m not going to go over the techniques we used in-depth; as mentioned in my previous post, Battlesandbiscuits have solid tutorials on table painting and flocking. We’ve gone for a pretty conventional palette of paints – so as to fit in with the majority of our fantasy bases – but for those of you who’re interested, I shall at least tell ye which colours we done used.

Scorched Brown? Nope, but Homebase did their best to produce something almost identical. One £3.50 mixing pot provided more than enough paint for the basecoat.

We then drybrushed the cliffs with a dark grey, again a tester pot from Homebase. Mmmm, emulsion. The colour was, I should add, a lot darker than it looks in the photo. After that, we busted out the keg of faux-Khemri Homebase Brown we got for painting our desert board. I swear Homebase aren’t paying me for a plug. Because obviously the Beard Bunker has such a huge audience that we get marketing requests from massive corporations all the fudging time. 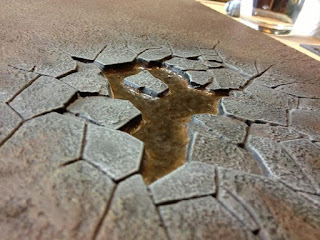 As we were unable to remove the water effects from the previous paint job, we covered them with tacking putty and painted around them. Obviously we had to touch up a few bits afterwards, but it was relatively painless. 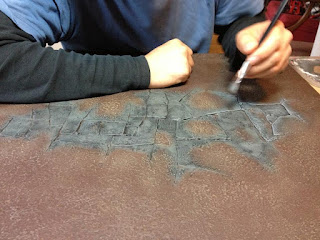 The rocks were given love. Fortress Grey love. Yay contrast. If you can’t tell, the bit with Fortress Grey is on the right of the image.

Scorched grass went around the edges of all the board sections to ensure consistent joins. For our secondary flocking colour, we blended in Silflor’s late autumn flock, which we picked up from Antenocitis Workshop.

Several glue-filled hours later, Maisey and I emerged triumphant. Mostly.  His phone had a thousand words to say on the subject: 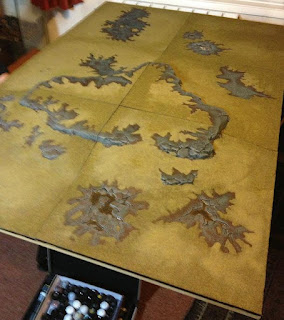 There are one or two bits I would've done differently in retrospect, but overall, I'm really looking forward to playing a game of Fantasy on this bad boy.