By Jeff September 04, 2012
Hello all! In lieu of a real hobby post (sorry! Read here to find out why!) I open the proceedings for the Beard Bunker review of Dark Vengeance. 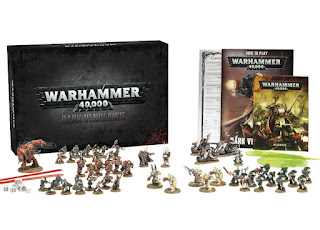 The plan is for all of us who have gotten our hands on the box and sprues within to give you our impressions thus creating a collaberative review!

Jeff: First thought, whoa. Seriously, I was all ready to dismiss this as a way to get the smaller rulebook and palm the rest off on ebay. Then I saw it. From the box art to the book via beautiful models there is precious little not to like.

Ok, so real thoughts now. Haven't played the missions yet so don't know what teaching value this will be for new gamers, hopefully the other guys can help? For hoary old vets like me, the box has the non back breaker rulebook, duh, and some of the most stunning snap together models I have ever seen. Seriously, these things have layering of detail and pose that you will not believe. Its all made possible by some seriously innovative part design that I don't believe would have been possible in pre-digital sculpt days. Some of the "cuts" in the multi-parts have to be seen to be believed. The delicacy and detail of elements of these guys cannot be overstated. The DA company captain's sword is so thin and sharp I feared I would break it cleaning the injection points!

Something I noticed straight away is the army composition. BOTH OF THESE ARE LEGAL ALLIED FORCES. Sure, you have too many DA characters but it means you have choices. This means that it matters not a jot if you have a Dark Angel army or a Chaos one. You can use the contents of this box in your armies.

Do I have no gripes at all? No, there are a couple of little ones, the only one that did make me go "oh, oh well" was the repeat of the tentacle reload backpack. This is such an obvious and cool piece that it will stick out that there are two of them on the squad. Surely they could have swopped it onto the non-repeat sprue and put a less recognisable part on the repeat? Oh yes, the numbering in the assembly diagrams. At least two parts, probably more are completely the wrong number. Not a problem for me as the pictures do the job but it's like that scene in Oceans 11, they've planned a heist down to the last detail and then forgotten to check the batteries. Seriously, was no-one available just to do the mildly labourious job of holding up a sprue and checking each bit has it's proper number? I'm not mad keen on the DA captain pose either, especially compared to the wonderful librarian. But really these are tiny, tiny midges buzzing around the delicious slice of cake that this box represents. Irksome but have spoiled my enjoyment not one jot.

Now, public service announcement. I have carefully experimented with all the models and can tell you this: Do not glue some of the componants to the chaos guys. Seriously. The horned carapace and fist armour on the Hellbrute (and oh dear god how cool he is) need to be left off for painting. Likewise the chaos captain's sword and backpack. Several of the chosen backpacks and a couple of arms need seeing to. Oh, and if you are lucky enough to have a limited edition chaplain, basecoat the inner lining of the cloak before sticking him together as it is a bear to do afterwards! Trust someone who knows! Mercifully he was the only one I'd glued before noticing. It's all down to the very, very high quality of the layering and the ability to have cut ins which we are just, just not used to. Anyway, the idea is that the other guys will edit this post and add their two cents worth below so I shall turn the floor over to the rest of the bunker dwellers!

Charlie: There's little I can say that Jeff hasn't already covered. If left to my own devices on this post I'd just nerdgasm all over the bus, and you don't need that. You really don't. The Dark Angels are very impressive, and unlike Jeff, I like the understated pose of their captain, but it's the Chaos sculpts that have bowled me over. I'm so, so excited to see Chaos Cultists become a reality, and them Chosen is da bomb, what? They're like the concept art, but on a sprue. Glorious.