I Was Uncool Before Uncool Was Cool


I went to Games Day Today Yesterday, and I’m going to pop up a quick, disorganised and rambling post about my day. 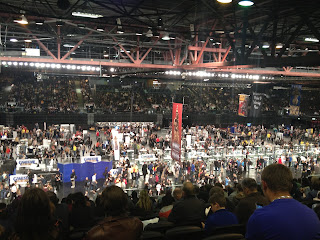 What I did at Games Day.


I met my friend Gareth shortly after opening, and we spent a considerable amount of the morning looking at the Armies on Parade and Golden Demon entries.
After a curry, we went to the Forgeworld Stall where we queued for what must have been, literally, agonising, minutes. – The sales areas have been seriously sorted the hell out and are as slick as a Transocean drilling operation in the Gulf of Mexico.
Surprised at the lack of queuing pain, we had a bit of a mooch around the design studio stalls, and then went to Forgeworld where we had a decent old chat with several people and saw a lot of new stuff.


Leaving the Forgeworld area, we had one last look at the Golden Demon stuff (including scoping the slayer sword winning zombie dragon) and then sat down for the awards.
(Sorry about the photography, it is sporadic and a bit shaky. You’ll have to use your imagination for the most part).


That was a brief synopsis, I’ll go through a few of these areas in a bit more detail. 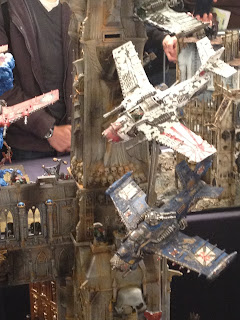 The one I voted for


I spent a good chunk of time looking at the Armies on Parade and it’s a funny competition. For a start, qualification is by regional knock out, so the quality of entries varies massively. In some stores the only entry goes through, in others there is stiff competition and what turns out to be the equivalent of a seasoned veteran gets to go to Games Day.


Secondly, there seems to be some confusion about what the entry should actually consist of – I think that it is clear that the competition is not simply a painting competition, and those entries that consisted only of well painted models plonked down onto a painted realm of battle tile failed to capture attention and win. Good painting (and particularly, a dark or muted colour scheme) suffers from a lack of good lighting – these entries are not lit by Golden Demon style halogen lamps 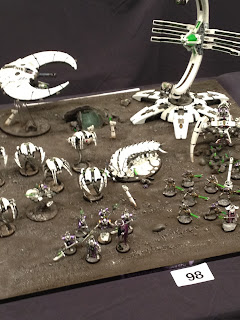 
The entries that seemed to garner most attention (and the ones that I liked the most) were the ones that consisted of a strong narrative or idea, with integral scenery on the tile and a degree of modelling and painting expertise. 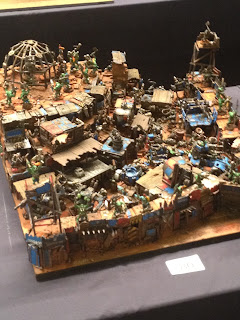 Ork Shanty town. Love it.
Certainly, the entry that (I think) won did not display the best painting. It was, however, well modelled, and told the story of tyranid infestation of a remote and isolated imperial outpost on a jungle world. Highlights included a fluorescent spawning pond; a lictor painted so that it seamlessly blended into the undergrowth and a number of infiltrating stealers crawling over the walls.


In truth it wasn’t my favourite, but it obviously captured the imagination of the other voters. My favourites included:


A beautifully painted Space Wolf force about to blow the asbestos right out of an exquisitely painted Kairos Fateweaver as he materialised from a smashed Rhino.
An Ork infiltration of a high rise (over 3’) Imperial City block


Overall, the painting standard in the competition was very high. However, there were few entries that succeeded in properly blending the force into background.  It may be the case that the scenery has become more important than was originally intended by the designers of the competition.
Nevertheless, it is my firm intention to enter an Army on Parade into next year’s Golden Demon.


The Forgeworld stand was over crowded with new stuff. The majority of which was on the Horus Heresy side. There is a new super heavy Land Raider variant with a titan class laser blaster bolted through it. It looks a little odd, but it wasn’t finished.


There was a new display board (based upon Istvaan?) that looked a bit like this: 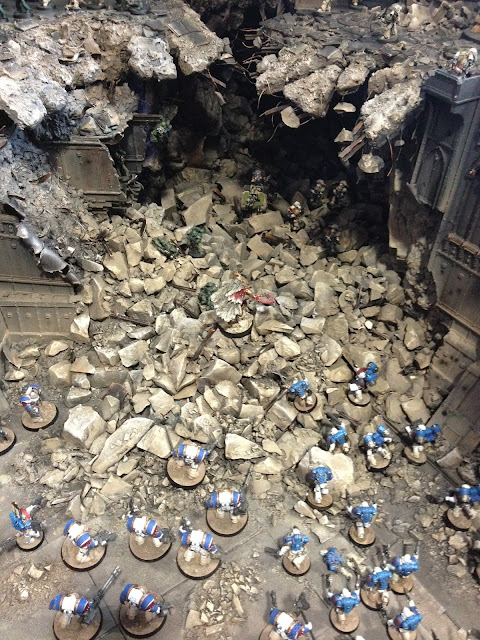 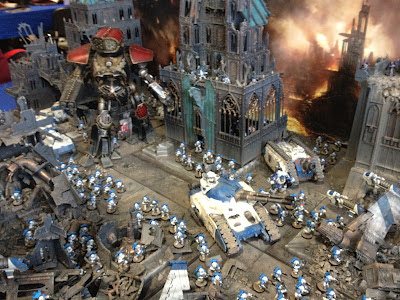 
Curiously, the white of the World Eaters was sponged on rather than painted, and it gives the models a pleasing, grainy and battered texture.


On the Warhammer Forge side, the model for the Mourngul is complete and looks as unpleasant as it is described in Monstrous Arcanum. 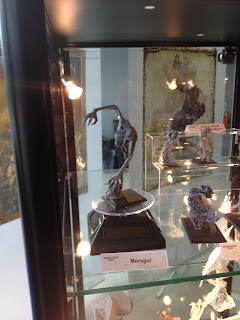 I talked at some length with one of the designers who is working on the K’Daii Destroyer - That’s right, Charlie, there’ll be a model for it soon. Apparently, it is relatively common for a Forgeworld designer to work on forgotten or sidelined projects in their spare time and then get the finished sculpt green-lighted for production once finished. This probably explains why every now and then a model or two for a ‘non-project’ range will suddenly appear – like the Tau XV9 battle suits a couple of years ago.
I also found out that Forgeworld work 1:1 when producing their models – no 3-ups or CAD for them, just hard sculpting graft. I am impressed
Finally, and as a bit of a rumour – it appears that the Adeptus Mechanicus will be playing more of a role in the upcoming Imperial Armour book.


Golden Demon Winner.
Was staggeringly well painted. The rotting red on the wings was so vibrant that it looked like the painter had replaced the plastic muscle strands with light gathering amber rod. The pictures don’t do it credit. The banner work and the intricate etching on the shoulder plates also showed a fine painting ability that was difficult to see, let alone replicate.


To make it betterer?
I genuinely think that the Golden Daemon entries should be accessible as a one way system, so that you can move from one to the next without constantly bumping into people or waiting to find a gap.
I also think that someone should punch the amateur photographers who think that it is their God given right to push to the front of everything so that they can take photos for their blog or website or Bell of Lost Souls or whatever it is. That sort of behaviour might be acceptable in the Colonies, but in the UK there is no excuse not to wait patiently in a queue. Harrumph.


Overall.
I had a great day, the people were friendly, the crowds weren’t too bad and the event was a huge amount of fun. The design and production staff were all approachable and interested in answering questions and the standard of painting was unreal.
I’ve come away feeling energised about the hobby, excited about future projects and I now have my next years’ goal in sight – Armies on Parade! Just got to decide what to do first.