Greetings fellow seekers after Primordial Truth, welcome to another Tainted Thursday. Today we are looking at a unit that kinda, sorta doesn't exist... ish.

These are an expanded unit of the Blackstone Fortress datasheet beastmen. I really wanted my Word Bearers to be a full-on "Chaos soup" with a wide variety of unit types and even species represented. So when I saw the datasheet for the beastmen and it said "unit size 4, only one of this unit can be used" I kinda went "huh". Wouldn't it be nice, thought I, if we were able to just say "sod that, I'm using multiples of the 4 all in one unit like every other datasheet and call it good". No sooner was that thought in my head than it's friend "wait, I only play with other narrative nutters, no-one will care" arrived. Having checked with the other bunker dwellers that this was indeed the case, I got on with the thorny problem of picking the right beastmen.

Clearly the Blackstone beastmen were the obvious choice. I already had the four that came with the box and there's plenty of people selling them on ebay. But, and it's a big but (and I cannot lie), there's only really two models there and the "variety" I'd already injected was "ish" at best. Clearly I couldn't do an entire unit of repeat units of these. They'd look like a line dancing troupe. I then turned my attention to the warhammer range of beastmen: but lovely as they are, they're far too fantasy for the setting. Then, glory be, I finally had a brainwave and looked at the Blood Bowl range.

And oh lordy did the Blood Bowl models work. Simple armour, ripped trousers like the Blackstone ones and a surprisingly useful transfer sheet. Plus there were eight beastmen in there. Perfect! The Chaos gods had smiled at me and blessed my endeavours. From there it was a simple matter of grafting some "brutal assault weapons" on to them. Mostly Genestealer Cult and Necromunda spares. Lore wise, well, I think it's best if our familiar narrator describes that:

"Beautiful aren't they? We find little pockets of them in the Eye from time to time. Simple creatures, only concerned with eating, breeding and worshipping the Gods. Their manner of worship is simple, savage and wonderous in its intensity. They also make superb shock troops and the smartest of them can learn a few words of our tongue. Mostly we just lead them to the lines, give them weapons and let them do what comes oh so naturally. There's even been a few times when they've encountered their enslaved kin in Imperial Army regiments and then there is no thought in their heads but freeing them. It seems that they are everywhere, like Orks, but in nowhere like their numbers."

Painting wise, I decided to keep it simple, a variety of brown and grey furs, rusted weapons and naturalistic horns. I was always trying to balance the naturalistic fantasy feel of the beastmen with wanting a more 40k feel to their wargear and clothing.

To this end, I painted the small amount of clothes they are wearing in camo colours. I figured that would be the last detail that would elevate them from fantasy/40k hybrids into a truly 40k unit. I also stuck some of the nice chaos stars from the decals that came with the kit on the backplates. 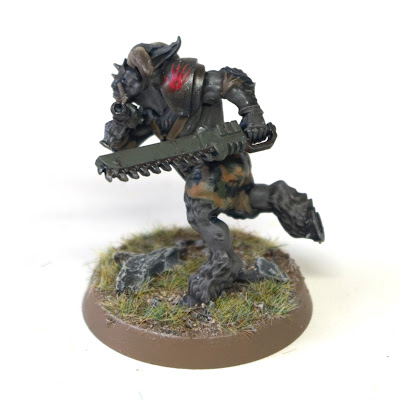 Feeling that the unit needed some identifying characteristics I had a browse through my pile o'decals and then noticed the really nice bloody handprint transfers. I applied them to the shoulders and then had a bit of a furrowed brow moment. The red looks really, really orange over metal for some reason. No matter, a quick pass with red ink fixed that problem and intensified the colour nicely. Plus I could now have Nick Cave's Red Right Hand stuck in my head for the rest of the day. You're welcome.

That's all for this week folks! More power armoured lads next week, until then, lovely people,