Greetings my cheeky chaotic cousins. Welcome to another Tainted Thursday and it's a doozy, we've got daemon engines (well, a daemon engine) and flying murderers aplenty so without further ado, lets get to it!

Lets start with the main course, the Raptors, and leave our tasty, tasty Venomcrawler for dessert. 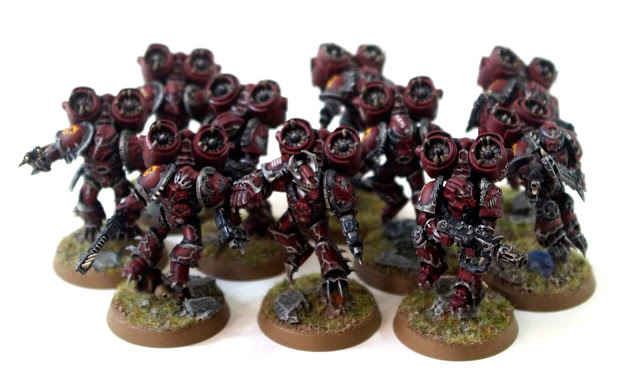 I like fielding big mobs of Chaos as I prefer to think of the units as little warbands. These chaps are the initiates of the Raptor Cult (I explained my notions of the mystery cults here) and currently worshipping the chaos gods in the scream of jump packs and the sprays of blood from their chainblades. 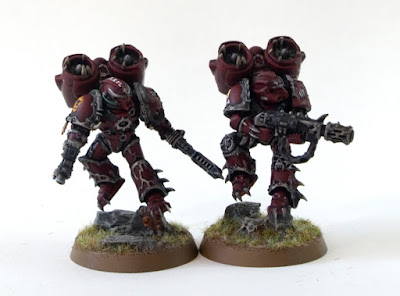 Were I being diplomatic I'd say these were a challenge to paint. But I'm not so I'll just say they were a cast iron sod to finish. Most of the problem stems from their lovely, lovely, ever-so-intricate trim pieces when combined with Gal Vorbak Red's eternal wimpiness. having to cut in the red basecoat twice was a pain in the fundament. The only thing worse would have been trying to pick out the trim in steel without getting it on the red... Sheesh. Still, the overall effect is lovely so I can't (shouldn't) complain too much. I'd decided to include a pair of meltaguns with the hack-and-slash mentalists as, frankly, it seemed rude not to. What's that? Fast moving infantry that can get right up to a pesky vehicle and nuke it? Yes please, I'll have two. 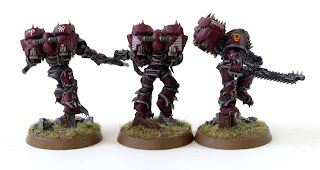 Of course, all of that extra backpack space gave me some room for blasphemous rune shenanigans. I'm getting more and more comfortable with being able to cut the decals to shape and scrape the remainder clean. Oh and speaking of blasphemous runes... 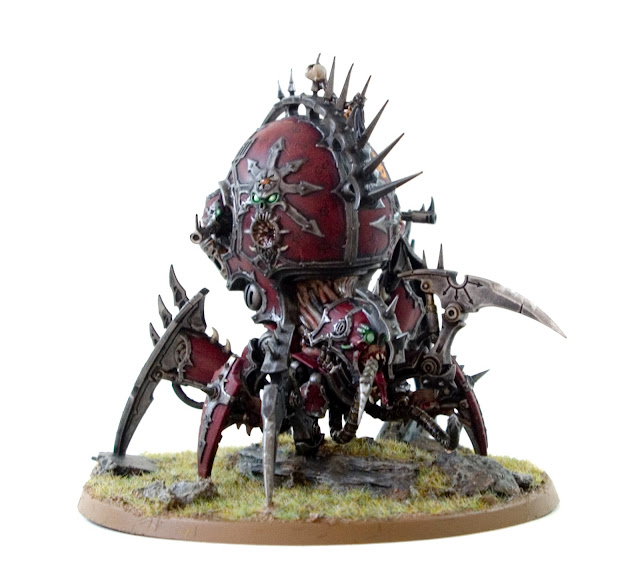 Who's a pretty boy then? I won't lie, this thing intimidated the absolute bejeezus out of me. So. Many . Cables. But I'm so glad I persevered as this 'orrible demon spider is just gorgeous. In fact, lets gaze at it a mo while our Mysterious Narrator tells us some stuff about it:

"Ah yes, the entity that calls itself Vastronok. I shall not utter it's True Name, the bindings are sturdy but not indestructable. I was there when Grelloch and Gallk birthed it into this world. The loosely jointed metal hanging from the carapace on it's wires and chains. Once the Mother had finished birthing the Daemon Seed it was placed, bloody and wailing within the metal of the carapace. Then the ritual truly began. We drew Vastronok to the material and offered it much power and soulstuff to drink if it would consent to be bound within the sacred metal body of the venomcrawler. In a voice that coated every being that heard it in slime it consented and moved within the Daemon Seed. It's young flesh immediately began to shape itself to Vastronok's needs and filled the metal. Complete and potent, Vastronok opened glowing lens-eyes and howled it's birth pains to the uncaring sky. A beautiful day." 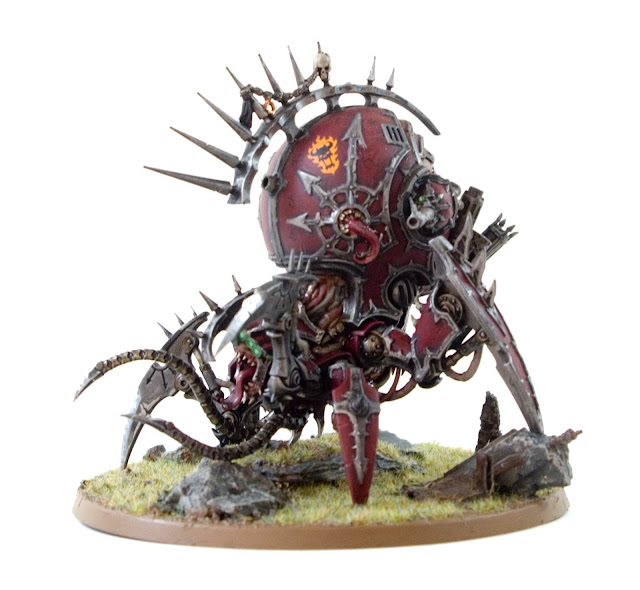 Painting wise, the Venomcrawler is handled much tha same as any marine, just with more colours of cable and big gooey fleshy bits. I've decided that I want to focus on daemon engines for vehicle support (even my Hellbrute looks like a demon engine). This is mostly to draw contrast with my other power armoured army, my Blood Angels, who have a buttload of tanks and transports. I wanted the synthesis of the mortal, the daemonic and the machine to be at the fore for my Chaos. 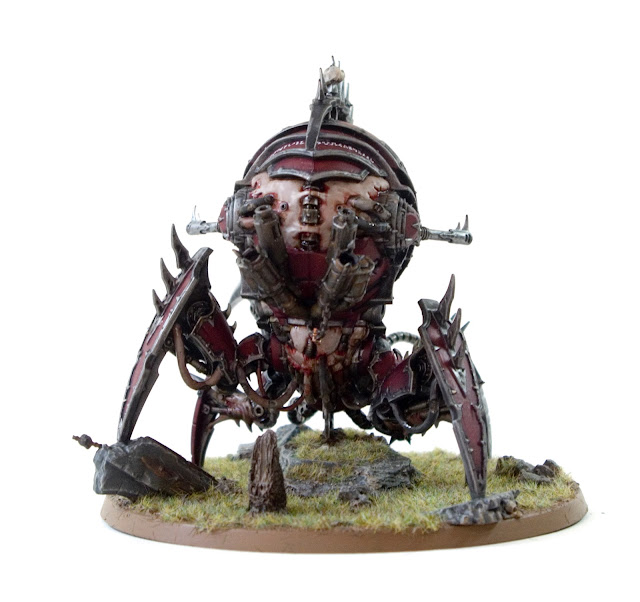 When all the primary painting was done, I moved to decals and weathering. I put black runes all over the carapace as it was looking a little plain and needed that little zhuzh (to go a bit Queer Eye for a mo) to lift it up. I then went to town with Blood for the Blood God and an enamel "oil and grease" effect paint from Ammo. I like the daemon engines to look a bit icky so some leaking blood, sores, and oily mechadendrites fit the bill nicely.

And there we go! That's all for this week folks! I'll be back next week with another Tainted Thursday, until then, lovely people