Why am I quoting Sin City? Well, something gribbly this way comes and yeah... it fits... 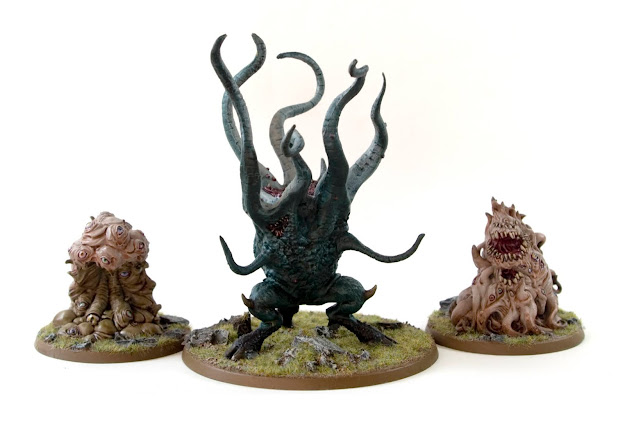 I have a real fondness for representing Chaos with more of a "protean" Cthulhu vibe than the normal riot of spikes. Nothing wrong with a riot of spikes, I just like my Chaos gribbly and disturbing. So when it came time to do some spawn I turned to some 3rd party sources for my disturbing pretties. Lets start with one we have seen before: 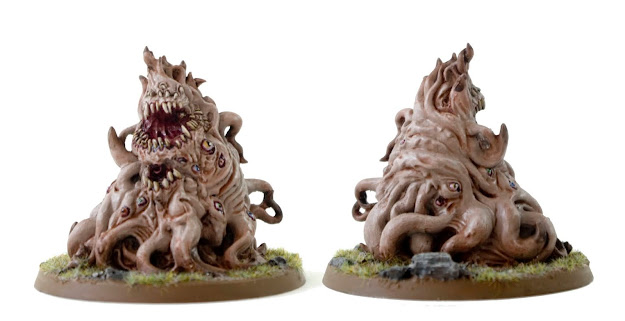 Yup, I'm so fond of this chap that it's the second time I've painted him. He's just such a glorious heap of fleshy upsetting. Now, yes, I could have just used the previous version but that would have meant rebasing him and, well, he's only a tenner... If you want an upsetting pile of tentacles of your very own you can find one at Fenris Games under their Cthulhu Wars range. This one is called a Formless Spawn. Painting, as I'm sure you can imagine, was mostly managing skin blending. I went with the same Rakarth Flesh based tone that the rest of the Word Bearers luxuriate in. Then it was just a matter of picking out lots and lots of eyes... oh and speaking of eyes, you may start to notice a pattern with his friend...

Also from the Fenris Cthulhu Wars range, this is a Shoggoth. As I was painting it I was imagining how it attacked. What came to me was a sort of envelop-and-dissolve attack like a white blood cell. That indicated to me that the inner surface ought to look like it was oozing with some sort of digestive fluid. Several thin coats of Athonian Camoshade gave me a nice contrast between inside and outside and a hint of chemical nastiness... After that it was just all them eyes. 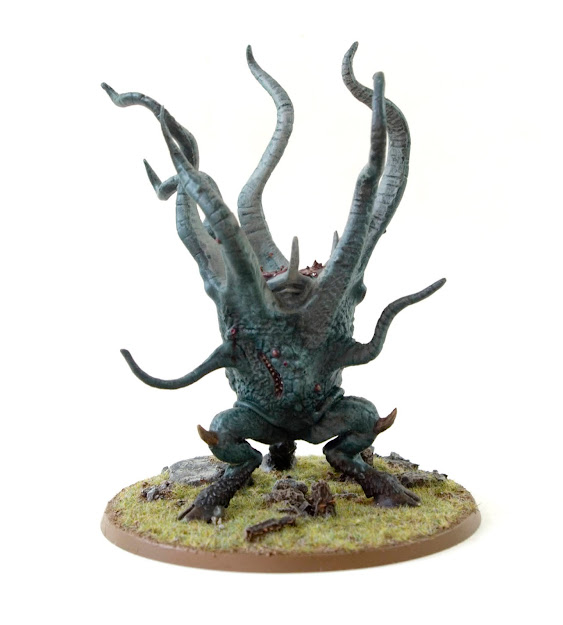 And finally we come to the Main Event. I've had this model for a while. It's a Reaper Bones "Dark Young" and it. Is. Massive. How massive you ask? Well... 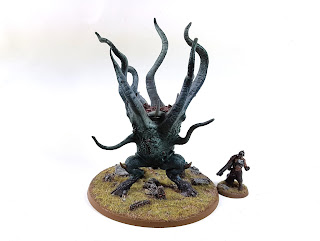 I wasn't sure if something that huge could work as a "normal" spawn. Mercifully Forgeworld have something in their Imperial Armour Index called a Giant Spawn and so what was dubbed the "tentacle goat tripod" by the bunker dwellers can be fielded with stats appropriate to it's stature. 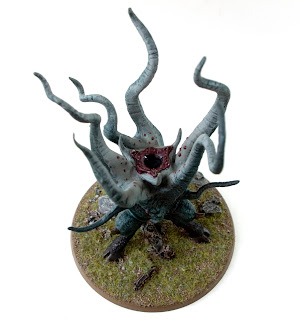 I wish I could give you exact recipes for the colours but I was mostly experimenting and iterating back and forth to get the result I wanted. I know I added Rakarth Flesh to the turquoise and continued the mix up to the pale inner tentacles. This binds the various colours together tonally. Simarily I darkened the mix to get the brown legs without them standing out. All in all he's rather lovely. I call him Patrick.

And with that we are all done for another Tainted Thursday! Rest assured there's still more to come. Until then, lovely people,