Frostgrave: They Came From Beyond!

By Jeff April 17, 2017
Yes, like the tagline to a 50's movie this time we're all about things that "Came From Beyond!" as the other half of my Summoner warband coalesces into the world:

One of the things about Summoners, I realised during playtesting, was you need a bunch of additional models. If you want a "lowest possible cost" warband, Summoners aren't it. But for me? Oh no, don't make me paint more awesome stuff... As I've tooled my wizard's spells up for being in the Summoner theme, I've got almost all of the ones that allow you to bring in other models for the warband: 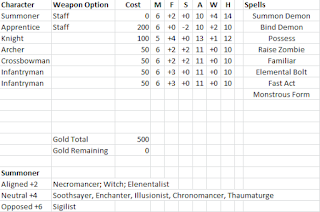 Summon Demon, Raise Zombie (yeah, still waiting on the zombie) and Familiar all bring extra models to the table. Initially I thought I'd just need one of each of the sizes of demon and a familiar because I'd been thinking of them like the zombie. You can only have one of those. But each spellcaster can control a demon so theoretically you can have two of each size of demon. Each spellcaster can also have their own familiar, so two of those needed as well. Actually, let's start with the little guys shall we? 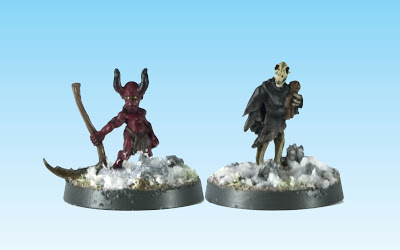 Those are a Hasslefree "Demon Child" and a Reaper Miniatures "Attic Whisperer". The Demon Child belongs to Freya Seshat (my Wizard) and the Attic Whisperer belongs to her apprentice, Simeon. Freya being part demon made the mini hellboy (who looks waay better in person, the paintjob lacks enough contrast for the camera but it just fine in the flesh) seem right for her. Simeon does most of the necromancy so having a little creepy skeleton thing clutching a teddy bear belong to a simple minded soul felt very appropriate. Regardless, neither are terribly interesting to talk about from a painting aspect so I'll take the time to talk bases.

All my frostgrave bases are designed to appear as overgrown rubble covered in snow in various states of melting. For the snow I use my favourite Secret Weapon product: their crushed glass snow flock. It has a wonderful translucency and sparkle and when mixed with water effects it makes a fantastic slush. For a bit of opacity and body I mix in some of the more normal snow flock with the glass and water effects and apply the paste where I want thicker, less melted snow. Works wonders. Disclaimer though, the crushed glass stuff isn't safe in the same way scalpels aren't safe. You need to take some elementary precautions as it can irritate skin and really, really hurt eyes so be careful. Worth it though. 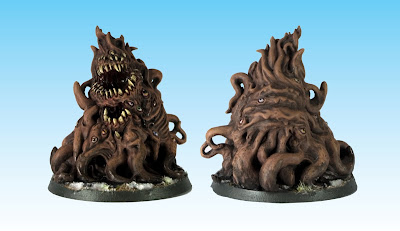 Now we've got the dinky chaps out of the way, let's get ready to rumble! The first trio of demons belong to Freyja Seshat. She's the more competent summoner and in my head-canon it is easier to summon an incorporeal being than to pull actual flesh into reality. I thought long and hard about what sort of demon I wanted Freyja to have, I didn't want the "classic" demon look as I can get that all I want from Warhammer. Instead, I wanted a more protean, more chaotic look, a bit Lovecraftian if you will. Lo and behold I find Fenris Games Cthulhu Wars range and this "Formless Horror". Perfect for my needs. I can imagine her drawing it through and then stroking and cooing over it like it is a cute kitten. Creepy as all get out. 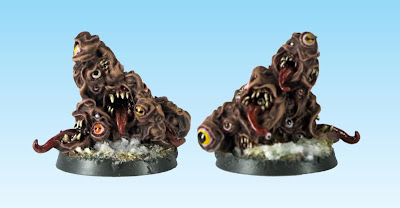 For the middleweight version, Red Box came through again with their "Lesser Horror". In painting these guys, I decided to go for dark, unformed flesh tones with very realistic eyes and mouths. I always find realism in the face of the fantastical more frightening than any amount of bright blue tentacles and the like. So lots and lots of research of different animal eyes went in to these. 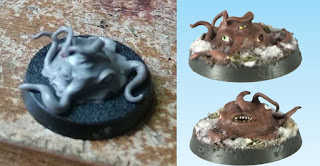 For the final one, I just could not get a model that I liked. So I decided to sculpt one, as this was the smallest and weakest it didn't matter if it was a bit naff looking. So armed with procreate and optomism I set forth. I actually think I did OK, could have done with some more squirmy flesh rather than the cowpat and maybe a tongue on that mouth to match the others but overall, not bad for someone who really does not sculpt much. 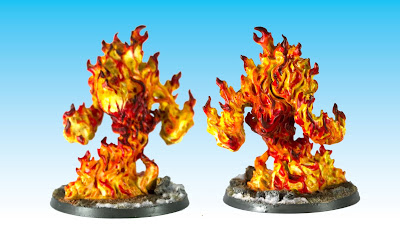 For Simeon I wanted a real contrast, something utterly opposite to Freyja and perhaps hinting at his hidden depths. Finally, I hit upon fiery demons, as incorporals they are easier to summon and the contrast between dark flesh and bright flame was appealing to me. Reaper minis came through again for this large elemental and the medium one below: 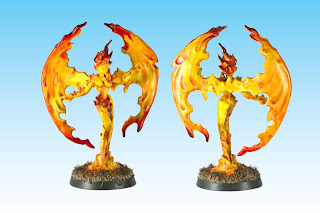 All the fire demons were airbrushed white over their primer coats to get the cleanest, flattest white I could manage. I then mixed yellow ink with some acrylic medium and thinner and built up layers of yellow with the white shining out through the translucent ink. I went back in to some deep areas with the white (with just a hint of yellow added) to build up the heat and then faded out to red via oranges on all of the exterior parts. Black was a final accent on the coolest parts of the flames. 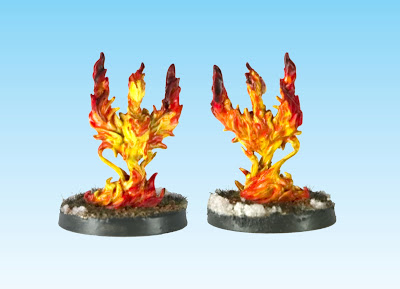 The final demon is a GCT Studios "Kami of Flame" from their Bushido range. It was literally the only small fire elemental I found that I liked at all and am therefore lucky that it's a good one. The little phoenix at it's heart is a nice one. It also illustrates what I did with the fire demon basing, which was to have the snow retreat and melt away from them. I kinda wish I'd thought of using one of those slightly larger Space Marine bases for the medium weight one as I couldn't get any snow at all on her.

And with that the warband is all but done. I'm waiting on some Red Box zombies to arrive which I'm going to paint as a gang of roving NPC dead 'uns and nick my favourite for what the warband will almost certainly refer to as Stinky Pete. Until then...