Frostgrave: Something Wicked This Way Comes...

By Jeff April 10, 2017
As regular Bunker Dwellers will know, Maisey has been organising a Frostgrave campaign for a little while. We've done some testing, figured out warbands and got to painting. To my considerable surprise, I've come in last in the "race" to finish warbands. But finished I am! Sort of, nearly, you'll understand later...

Thar they blows! A mean band of na'er-do-wells ready to take to the streets of the frozen city in search of riches and hidden knowledge that man was not meant to wot of. Mercifully no-one ever bothers to say what women may not wot of so my wizard is golden as far as the forbidden knowledge is concerned. Speaking of which... 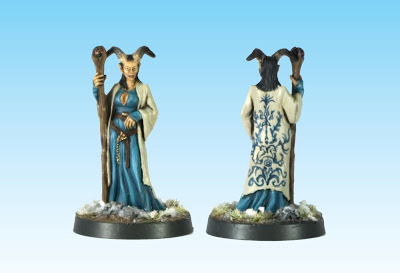 Meet Freyja Seshat, Elven (mostly) Summoner and five times winner of Head Covering Monthly's: Least Likely To Wear A Hat award. I had wanted an excuse to paint Hasslefree's lovely Semira Marise model for ages, with Frostgrave, I had the perfect opportunity. I knew the rest of the warband would be in practical, dark age esque colours and wanted my wizard to stand out a bit. Thus I went for the pale coat covering that strong cold turquoise. To me she looks wealthy and unconcerned by how much she stands out in the warband, confident. The back of the coat was a bit flat so I went at it with freehand and optimism. Turned out all right I think.

Ms Seshat, as her unconventional appearance may indicate, is a Summoner: One who brings demons forth in to the real world. As an apprentice she read a few too many tomes that she was not quite ready for and was possessed by a powerful Outsider. It has been guiding her steps ever since, through the murder of her master and the acquisition of her own followers. Every step drawing her closer to the ultimate prize of the Frozen City - Transendence, or as her passenger would put it: "going home". 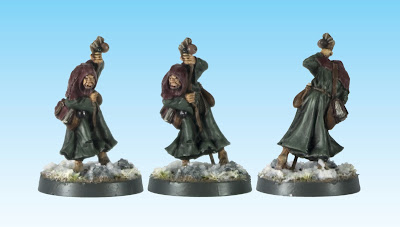 As we're on the subject of Freyja's apprentice, I guess we had better, reluctantly, turn our gaze on her adoring spavined assistant Simeon. Simeon the Skewed - as the warband call him behind his back - is consumed with admiration and smitten with his beautiful mistress. His power is considerable, indeed he is much more the talented necromancer, but believes himself second in all things to Freyja. If his confidence ever matches his talent he could be dangerous indeed.

Simeon is one of Red Box's "Gregor the Crooked" halfbloods. I loved the idea of a morally compromised wizard having a real "Igor" of an apprentice and fell in love with Gregor on first sight. I debated taking some elements from the Summoner's colour scheme and replicating them on Simeon but in the end rejected the notion. He looked so much better in lowly green and russet brown. After all, he's barefoot in snow. Rich colours do not suit him at all. 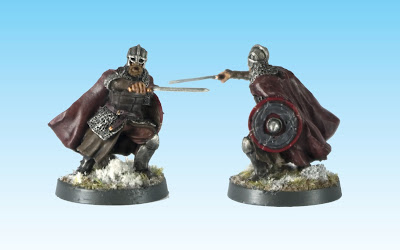 Opening the "meat shield" section of the warband is my knight: Sir Aelrik the Reckless. I've already talked about his painting on the old blog so I'll prattle on about backstory and so on here instead. Aelrik is a sellsword of dubious morality, his knighthood was long since revoked by the Theign that granted it to him but he stubbonly keeps on using the title and dares any to quarrel over it. He came to work for Seshat by being defeated. He was in another wizard's warband that squared off against her - at that time - small band. A challenge was agreed in lieu of outright slaughter and Aelrik strode out to face her champion, a beardless boy, a street rat thief with the muscle tone of a string bean. One possession spell and five minutes later Aelrik was bludgeoned unconscious as the territory ceded to Seshat. Aelrik upon awakening swore allegiance to Seshat and asked only one thing of her: To grant him that power. This she has done regularly, willingly, and happily ever since.

Backing Aelrik up are a pair of Infantrymen, the first of which (again, painting over on the old blog) is a highlander by the name of Declan. Declan fell on some hard times, hurt himself on them, and needs to drink to forget the impact. This needs coin and so Declan is willing to work for any Tom, Dick or Harry who can tolerate his surly manner and offers him silver. 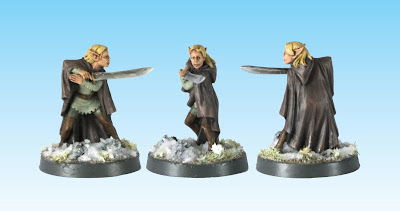 The other infantryman is, at first glance, a bit of an odd fit for this band. Being as she is a clean cut, decent, Elvish lass. Sarisia of the Greenwold is a young, impetuous and rather naive runaway seeking her fortune as a mercenary in the Frozen City. Her first weeks were terrifying and deeply unfriendly until she ran into a charming, mysterious Elven women with a hint of attractive danger about her. Perfect for a runaway trying to reject her old life while keeping as much of it as possible. Sarisia is rather out of her depth and an Olympic champion at rationalising away red flags. Hopefully she'll come to her senses before Seshat gets her killed in persuit of even more forbidden knowledge but we're not holding our breath.

Sarisia is another Hasslefree acquisition ("Luna") and needed to look respectable for want of a better word. I tried a bunch of different combinations of green, but none of them were doing it for me. Even the current stone grey/green mix was initially not looking great until I darkened the cloak to its deep brown/black shade it is now. Then it was perfect, respectible dressed young elf hiding away in a big dark cloak in smokey taverns radiating "please don't notice me". That'll do. 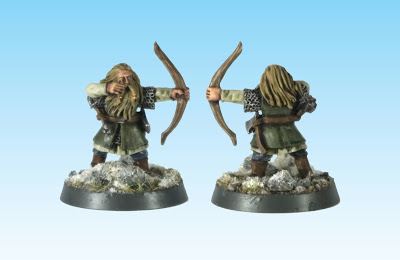 All that muscle needs some fire support and the first half of that is well provided in Thorfal Borrson: Dwarven archer extraordinaire. Thorfal (who I have, last time I promise, talked about before) is not actually much of a warrior, he's a hunter and farmer from the villages above Felstadt. With the local climate being thrown out of whack by the Frostgrave spell ending, his harvest has been poor and game scarce. With a family to feed and few marketable skills Thorfal knocked the rust off his father's mail and headed for the frozen city. His lack of combat credentials didn't bother Seshat as it had other wizards, she just saw a sure shot and a simple motivation. Perfect for her purposes. 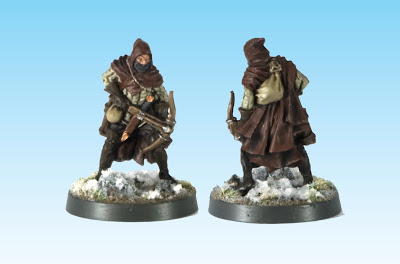 Rounding out the warband is "Shady Ivan", very likely not his real name. Ivan is a recent hire who had recently arrived in something of a hurry from "out west somewhere..." and tends to keep his face covered; stays away from bounty hunters and wanted notices. With this barely concealed backstory writ large in his every action most reputable wizards want nothing to do with him. Fortunately for Ivan, Freyja Seshat is in no way reputable and his employment is assured. Ivan spends his days practicing with his crossbow and making innapropriate suggestions to Sarisia. Charming chap.

Ivan is actually another Red Box figure, this one from their Aenglish range (as they're called on Hasslefree's site) and is normally called "Grim Garrett". It's so nice to have models wearing gambeson as their only armour - they are actually quite effective armour - and I can really see myself getting more of these. As for colours, undyed linen for the gambeson made sense and I just reached for the russet brown that the rest of the warband seemed to have elements of. Otherwise, he's not all that complicated!

Now this post is already massive so we're stopping here for today, but we are not done, not by a long way. Because as I mentioned, this is a Summoner warband, and if there's one thing Summoners do well it is making that warband bigger by supernatural means. So the summon-able elements I'm keeping for next time... oh all right, just one sneak peak then...

Till next time, lovely people...