It's once more time to get down and dirty with the poor deluded souls who think the Gods of Chaos will provide for them. Yep! Cultist O'Clock again folks! What? No, I don't have a problem, YOU have a problem! Ahem. On with the show...

In my persistant quest to make my Chaos army as "Chaos Soup"-ey as possible I'm adding as many different looking Chaos Cults as seem... not insane. So far I'm up to five different looking cults... planning 7... over 8 units... yeah... Anyway, the latest addition to the Word Bearer's fanboy groupie mob are the Necromunda Corpse Grinders. As with all my other converted cults I've made a few modifications to the base kits, I'll go over that when we get to them. For now, lets meet the leader: 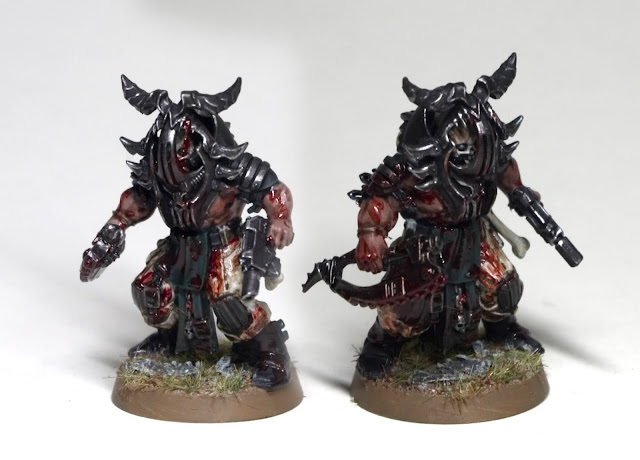 What a pretty boy eh? I really liked the look of the big lads from this kit, bonkers Khorne-a-go-go. I debated for a while who would be the leader but eventually, the chap with a literal skull head in a cage had to be him. Obvious advice, leave the cage front off when painting as it would be absolutely impossible otherwise. 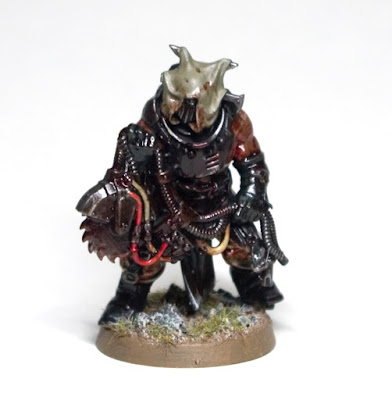 But before we get to painting and modelling proper, we really need to meet our latest cult in the traditional manner. Through the eyes of our now named narrator, Orcus Kairon:

"Keep walking, don't look at them, don't get too close. They are not safe for your kind. The Ladder of Blood they call themselves, some kind of metaphor for elevation through murder. They've got some kind of crazy obsession with becoming us, becoming Space Marines. I'm not even sure they're that bothered with being Word Bearers, not that we'd ever take them, they just want to be post human. They know we have extra organs and gene manipulation so they try to ape it. We've heard of mortals being caught alone and butchered, their hearts being placed into a strangers chest minutes later to replicate our secondary." He shakes his head "It's tragic really, so many of them die of awful graft vs host complications or rampant infections but as with all these things, failure just means you haven't killed enough. Not enough sacrifice, not enough rage. Khorne will lift up those who spill the most blood. I don't imaging they'll be with us long, but while they are here they are enthusiastic breachers..."

I'd decided to finangle the armament a little, as the cultist unit has pistols and the Corpse Grinders are rather enthusiastically monotasked to close combat. A few donor guns from other Necromunda and Genestealer Cult kits gave me what I needed. I decided that the metalwork would be left bare, coloured only by a little rust and the sprays of blood from their victims. Andy, another bunker dweller currently terrifying us with his Necrons, suggested white clothing. As though they were fresh from their abbatoir jobs. This theme stuck and informed the rest of the choices as I went through. 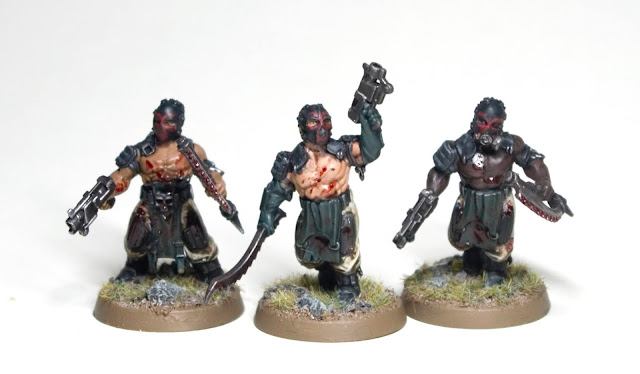 Just as an aside, I'm not wild about the wee guys, replaced the weird, weird heads with some Anvil Industries bulletproof mask heads. I think the less said the better, only so much lipstick that can be slapped on a pig. They do though, show the rubber aprons quite well. I figured heavy greenish rubber would be the ideal adjunct to the white uniforms so went for it. Over a basecoat of Vallejo Dark Rubber, I started highlighting by adding Waaagh Flesh to the Dark Rubber for highlights until I was at pure Waaagh Flesh. Then I glazed the whole thing with Coelia Greenshade just to add that last greenish pop. I then got over-excited with weathering. First with filth courtesy of various enamel paints on the trousers. Then with liberal application of Blood For The Blood God I finally gave them that Khornate caché they needed. I've decided that excessive blood will be the Mark of Khorne for my army. I'm planning some Word Bearers berserkers at some point so expect them to also be gooey. There is one chap who isn't splashed in blood though. Largely because he doesn't use a chain weapon. This is Psi-2, a hygeine servitor repurposed to violence by crude modifications to his doctrinal wafer. Now he just growls a single word "dirty" before hosing the enemies of the cult in blazing prometheum. I was really happy with this conversion! The Kataphron kit is the gift that keeps on giving as it donated both the flamer bionic and the socket that used to have his mop attachment on. This arrangement was inspired by the new Slave Ogryn gang from the Necromunda range and you'd better believe you'll see some of those soon!

But that's all for today folks, there'll be more Word Bearers soon because even after 3,500 points... I'm not done yet, I have plans! THE CHAOS SOUP WILL HAVE CROuToNS! Nooooo! Not the net! Not the neeeeeeet!

Until then, lovely people
TTFN