Something Icky This Way Comes - Plague Marines and Cultists

Greetings fellow devotees of the Plague Father, even as I become more immune to our bloated lord's latest and most irritating creation I nonetheless serve him. By painting some of his most devoted servants, the Plague Marines of the corrupted Astartes.

Yes, the latest "God Squad" of the Graven Star chapter of Word Bearers are complete and ready to share their special presents with you all! First, lets have a little natter about the Plague Marines kit and what I did with it. Once I realised how I was going to incorporate the various elite squads into the army I knew I wanted to use the Plague Marine kit to represent the Grandfather's chosen. Trouble is, the Plague Marines are... how can I put this politely... a little cartoony in places? Having a good hard stare at the sprue pictures I figured I could "dial them back down to 11" and make it so that they looked like they fitted in with the more restrained normal Chaos Marines kits. As it happened, this was mostly achieved by using the boltguns. It's the wacky close combat weapons that have some of the weirdest design choices. I also carefully chose breastplates to have the least mad designs and replaced some shoulder pads with regular Chaos Marine ones. I think the result is a Plague Marine squad that veers more toward the "realistic" than the normal and thus gives me a happy.

That having been said... this kit has so many ultra-specific components that I think it would be impossible to have many squads of these lads without endless twins. It must be very frustrating to do a full Death Guard army. Mercifully, these 7 are the only ones I'm ever planning on having. So with them assembled, it was time to get to the bit I was really, really looking forward to, painting. 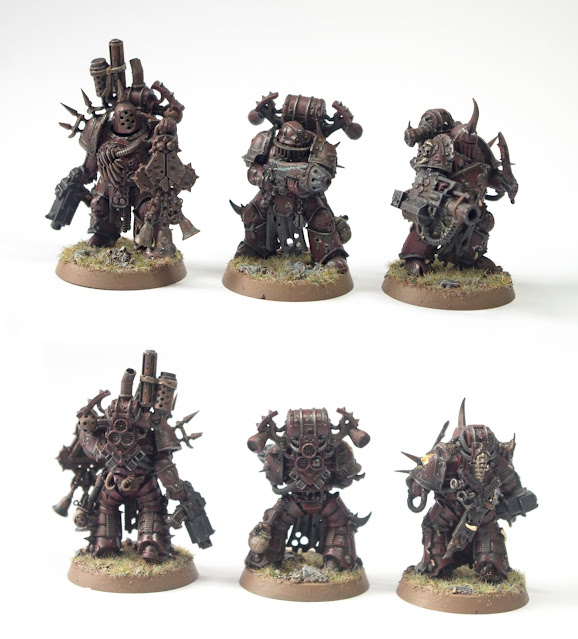 I started by painting them exactly as I would do were they normal Word Bearers but with an added layer of Vallejo Dark Rust before the metal drybrush. Once I had them nice and red and clean I could make with the icky and weird. All their bony protuberances and weird parasitic tentacles got picked out in various unpleasant shades (this was mostly trial and error, I've no idea what I did). Then I started doing subtle chipping and flaking of paint at the edges of some of the armour plates. Finally I was ready for my favourite part of these models. Busting out almost every enamel weathering paint I own and going to town. I think I used Ammo's Streaking Grime; Dark Streaking Grime; Winter Streaking Grime; Rust Streaks and the amazingly named Slimy Grime Dark. The advantage of using enamels over fully cured acrylics is that the solvents that enamels use don't bother acrylics at all. So you can blend and smooth the muck into lovely streaks without any difficulty. One day I will do a tutorial on this but for now several good tutorials can be found in Ammo's How To section. 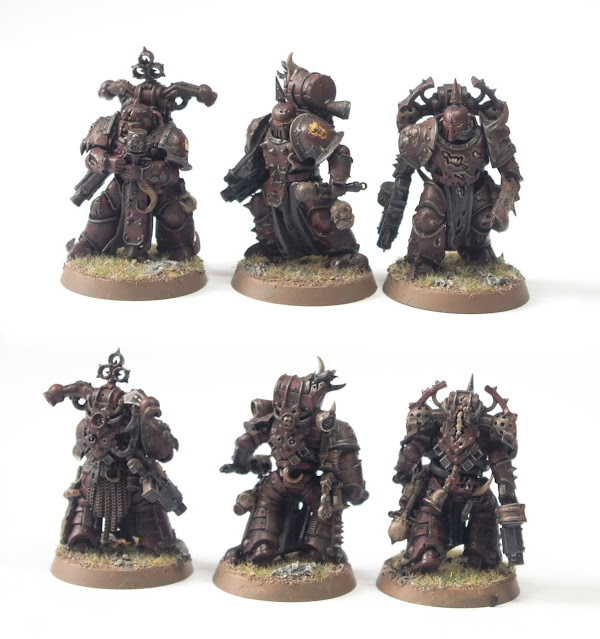 But now that we have them good and filthy, it's time to meet them properly through our normal method of listening to Sorcerer Orcus Kairon talk...

"Ah, hear that? The dull clanging of bells? That is a warning to our unaltered followers to breathe shallow and clear the path. For your sake we should do the same. Do you recall our conversation about Living By The Rule? Argel Iagath's Fateshriven are another example. They follow Grandfather Nurgle's teachings and example and thus abandon themselves to the fates and whims of the universe. What will not kill them makes them strong and they no longer care for their own comfort or future. In truth I have always found it to be one of the more pathetic paths to tread. When you look at those who have joined among our Bretheren they are always those who struggled the most with our transition from the Emperor. Our isolation. Our loss and failures. Instead of facing the universe as an Legionary should they turn from it. Abandoning responsibility and abdicating caution. I'm sure there are some who are truly happy to be host to noisome parasites and twisting warp entities but most have just convinced themselves of that. At least, that is my read of the situation. You won't catch me joining them, let us take another path instead..." 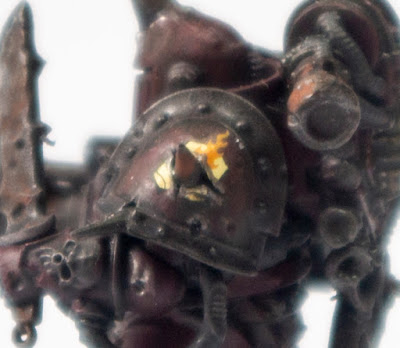 One last thing before we leave the stinky chaps of the Plague Marines and move on to the cultists: This one is a good example of how we can manipulate transfers to aid storytelling. I didn't fancy freehanding anything on to the fairly limited space on this shoulder pad, so instead I carefully sliced the transfer into pieces and snuggled it down under layers of MicroSol. This helps it conform to the torn edges of the shoulder pad. I did mess up a little and had the icon not cut at a steep enough angle so it's a smidge off centre, but not so much that it's a problem. By doing this you've got the story of that bit of the model. Originally painted with the mark of the Word Bearers, then at some point the prong bursts through it. Without the icon if looks like the shoulder pad was meant to be that way for some reason.

But wait! That's not all! Order your Plague Marines now and you'll receive this lovely set of cultists too! Yes, I've painted even more cultists. Yes, that brings the total up to 80 cultists. Yes, I've got problems... Before I go any further, I must credit @the_Richyp and Charlie who found them on their feed for the notion. I would never have thought "you know what would make an excellent combination? Genestealer Cult Neophytes and Scion helmets" but they really do! Given that our friend Harvey has a ton of random Scion bits lying around and I have one or two Genestealer Cult bits in my collection these turned out to be pleasingly easy. I added an Orlock heavy stubber as the GSC one has hybrid hands and thus isn't ideal. Before we find out about these chaps I should also mention that the really cool glowing eyes came from Darren Latham's excellent tutorial on the subject. 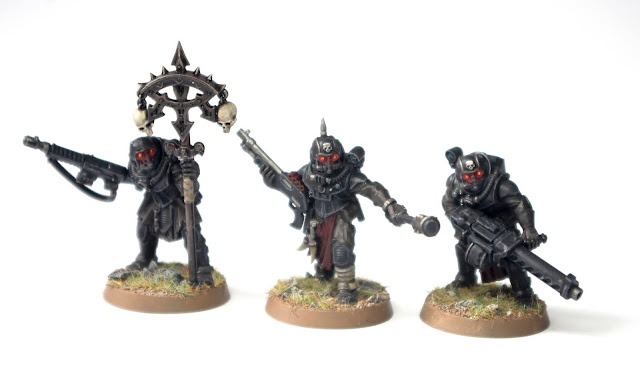 So who are these sinister looking chaps? Lets return once more to our "friendly" narrator:

"Would you look at that, it warms my cold, cold soul to see it. Actual professional mortal soldiers training and drilling in our service.  Do not misunderstand me, the fanatic and zealot have their place and are well beloved, but there is no substitute for discipline and certainty. Hmm? Oh, they are the Voluscani heavy infantry. During the 11th Black Crusade Voluscan was in our path of advance and we were delighted to discover that the entire planet had been freed already by their own people. It seems one of the nation states had significant pockets of the True Faith within their ruling class and it had started to trickle down to their population. The Governor of Voluscan was embarrassed and hid the evidence from the cursed Inquisition and thus it flourished. Eventually civil war erupted, sparked by news of the Crusade and our side won. It turned out that they had been preparing and drilling for this for decades. We gladly accepted their fighting men into our ranks and proceeded. Of course, the Imperium bombed Voluscan back into the stone age once we retreated but their proudest sons serve the Dark Gods still." 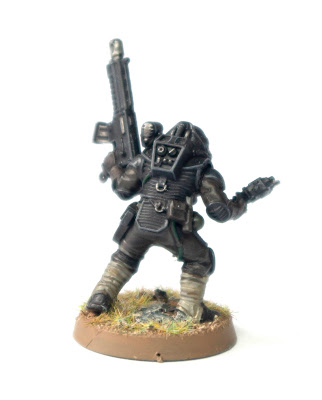 Other than the eyes - which Darren will explain better than I - the only other point of painting interest on these is that they're an excellent example of working with "adjacent blacks". Because we can't ever really use pure black on most figures there is always a tint or tone to the "black" that we end up with. This means that you can have a miniature entirely painted "black" that nonetheless has distinct elements to it. In this case those elements are as follows: Grey-black on the armour (Corvus Black), brown-black (Vallejo German Camo Brown-Black) on the leather and a green-grey-brown-black (Army Painter Hardened Carapace) on the clothing. All of these got drowned in Nuln Oil and then re-highlighted but the different tones mean you can clearly distinguish the various textures.

And that's all folks! I hope you enjoyed the latest additions to the Graven Star as much as I do. Next up for the Word Bearers will be some very special Rubric Marines so stay tuned for that! Until next time, lovely people