Inspired by Jeff’s spectacular (if somewhat dreamy) backstory for his Nurgle army, this post is going to describe two different methods for generating background for the units in your army.

My suspicion (feel free to correct me by leaving a comment) is that most people just decide on an overall theme for the army, and maybe write up a little background for its commander. For me, I want more than that. If every single one of the units (sometimes even the unit champions) in an army has a little backstory (just a sentence can be enough), I get more excited about painting them.

To elaborate, I’m going to use two examples: the swordsmen from my Hochlanders, and the stormboyz from my Orks. The Hochlanders are a perfect example of how digging through background material can provide inspiration, whereas the orks are a good example of how staring at the actual model and giggling can be just as effective.

First, the Orks. I ended up choosing the following face for the nob: 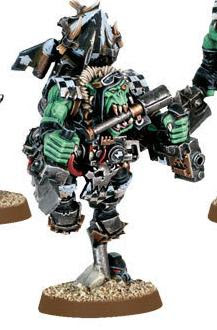 Look at him. Just look. He’s clearly a mentalist. I thought about giving him a ‘normal’ orky name, like most of my orks (e.g. Grimtoof, Ulgrin, Wazzgrod etc) but this guy was clearly on a mission. I don’t know what that mission is, but he’s on it with a determination usually reserved for superheroes. Thus, Kaptin Rokkitt was born. This set off a chain of thoughts in my head: clearly, the other stormboyz are members of a sort of personality cult; acolytes who are shunned by other orks for their dedication to ‘da misshun,’ as opposed to more orky pursuits like hitting people with sticks and drinking grog. It’s kindof a ‘what if,’ as in, ‘what if someone was as mentally damaged as Ghazgull Thraka but not as popular?’ There’s also the question of just what Kaptin Rokkitt’s mission really is; everyone loves a mystery.

I’m so much more excited about painting my stormboyz now.

On to the swordsmen (whose banner was featured in part one of the freehand tutorial). All I knew about these guys initially was that a) they were from Hochland, and b) they were going to be a kitbash of state troops and greatswords. I therefore needed to find out more about Hochland, and to work out why their clothing was going to exude heightened posh-osity compared to the other troops in the army. My first port of call was Warhammer Armies: The Empire, although this didn’t tell me a huge amount about Hochland or its elector count. I turned to the internet.

Warhammer-empire.com turned out to be a treasure trove of Empire background material collated from every GW source out there. I found out about both Hochland itself, which I now knew to be a rural province in which the worship of Taal – god of the wilds – was prevalent. Wanting to know more about Taal I headed over to Lexicanum.com, and discovered that his symbol is a stag skull (hence the banner). I now knew that I wanted to call the regiment the Blades of Taal, but wanted to know where they were from. Wouldn’t it be ideal if there was a detailed map of Hochland showing all the settlements in the province? 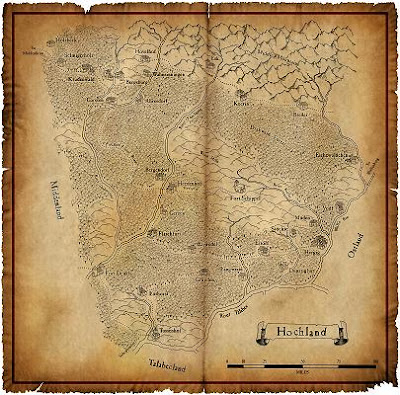 Hello, Windsofchaos.com. I picked Bergendorf as the Blades’ hometown, imagining them to use it as a base from which to launch patrols into the Drakwald Forest. The only question still remaining was that of their plush clothing.

The answer came in the form of the unit champion. The model I’d converted was over 50% knight components, but I couldn’t see an actual knight leading a unit of state troops. Perhaps his father was a great man, and this guy – still a young noble – has inherited his father’s wargear and is determined to make a name for himself. I think the best way to deliver the resulting story is via the medium of prose...

Josef von Brecken stood in the armoury of the Bergenhof with his arms outstretched. His manservant, Torben, was strapping his breastplate on over his arming jacket.

‘I’m going to lead the men by example,’ Josef announced.

‘A good leader never asks his men to do anything they wouldn’t be prepared to do themselves, that’s what father always said.’

‘So you’ll be living off their rations and wearing thin, patchy clothing, sir?’

‘What? Are they not properly equipped?’

‘I went to see them yesterday, sir. They’re properly equipped by the standards of Hochland’s finest, sir, that is to say, they have weapons. Some of them even have feathers in their caps. I should warn you, though: several of them couldn’t afford any shoes.’

‘Preposterous! I’m not walking through the Drakwald barefoot,’ Josef said. He considered his options, which were many, given his vast wealth. ‘Double their rations, and get them some decent clothing. I want them looking so dashing that they’ll put the Count’s bodyguard to shame! The Blades of Taal shall be the talk of Hergig!’

‘Shall we be increasing their pay, sir?’

‘Oh, come on, Torben, let’s not get carried away.’