By Jeff March 01, 2012
As a bit of a break from my various projects I have been working on some Roleplaying Game character models. This all started when I was asked to paint some models for a Call of Cthulhu group a friend runs in London:

I had a ball making individual characters each with their own colours, look and feel. Gives me the opportunity to play with colour combinations that I don't usually use and to experiment with new techniques without thinking about keeping an army colour scheme consistant. I decided that I wanted to try making a model for each of the classic RPG character classes. As far as for which game to use, there was only one choice:

For those unfamiliar with RPGs let me quickly introduce you. Pathfinder is what D&D (Dungeons and Dragons) always wanted to be. It picked up where the 3rd edition (actually 3.5 but who cares) left off and fixed all of the little things that were wrong. It is, by a long way, the best "High Fantasy" roleplaying game I have ever played - and I've played a few! In an RPG you play a single character rather than an army of them. As a result you can do things that you couldn't do in a wargame or in greater detail. Pathfinder's rules revolve around the concept of DC's (Difficulty Class). The gamemaster (the guy/gal/zombie who plays the rest of the world, tells the story and runs the game) sets a challenge a DC (say 15), the player, in order to achieve the challenge (picking a lock, walking a tightrope, striking an enemy) rolls a 20 sided dice and adds any skills they have to the number. So for example, Jeff the Pirate Viking is trying to craft a makeshift oar from a plank to paddle his longship. The GM sets the DC for this challenge at 18. Jeff sets to work. He has a couple of points worth of craft (woodwork) skill which will add 2 to his roll. He rolls the die and gets a 15. Even with the bonus he has failed. His knife hits a knot and splits the blade of the oar. Cue cursing. I'm going to talk more about RPGs over the coming months (as will others I have no doubt!) but for now, on to the miniatures.

Pathfinder has expanded considerably on the basic character classes from the original D&D rules, there are enough now that I could make 6 whole adventuring parties out of them and use up some random models in the process! The first group is already done and here it is! 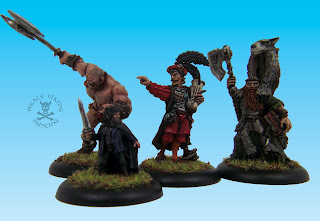 I decided to use the privateer press style lipped bases as they have more of a "display" feel than the normal slottabases. Each party will have a different base style to bind them together. Lets have a look at these four and what they do in the game 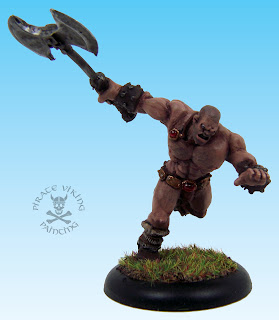 Barbarians are exactly what they sound like. The classic movie image of the Conan-style warrior succeding through raw strength, agility and blind rage. In the game they have the ability to fly into a berserker state making them resistant to pain and stronger but a bit single minded.... Hulk smash! 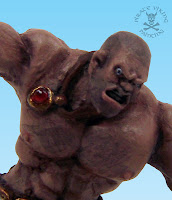 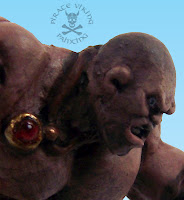 When you have a model with this much skin on show you have to do something with it. I decided to use it as an opportunity to test out the body hair methods from the excellent article Painting Faces Redux from White Dwarf. You can still get it online from the GW website (I think!) but in essence it is thin washes and streaks of the hair colour that you want to use and then rehighlight with skin colour to make the colour drop into the skin. 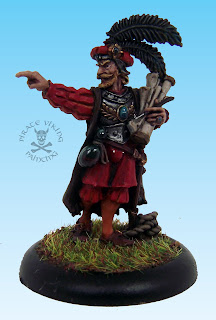 Bards are the classic support character, their skills are all based around improving the other members of the team and knowledge of the world. This particular guy I chose to be the singer and chronicler type of bard - some play instruments - as his scrolls and quill indicate writing down songs and music from around the globe. These people used to be the newspapers of their age spreading stories, gossip and legend around the nation. 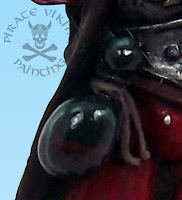 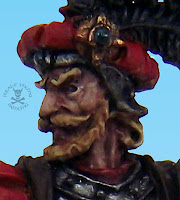 Painting wise, thi model was a joy. Really nice crisp casting with little details to catch the eye. I am particularly happy with the bottle on his belt. A basecoat of Orkhide Shade is darkened with black and highlighted with white to create the colour of the green glass. The contents were achieved by mixing red with the glass colour and painted on leaving a little of the green around the edge to show the thickness of the vial. The catchlights and a gloss varnish coat really make it. 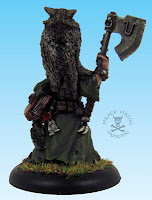 Clerics are in direct contact with the gods of the Pathfinder universe. They cast divine magics with the blessing of the gods and smite the evil and unjust in righteous combat. They are healers extroadinaire and keep the party alive during combat. 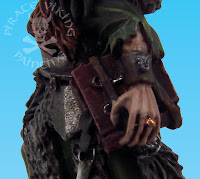 The model was my first test bed for the "Andy Green" mentioned in my Nurgle Sorcerer post. The red beard was to balance the green. A natural red hair is one of the harder effects to achieve. I always use Vermin Brown as the starting point, highlighted with bleached bone and then glazed with a mix of Devlan Mud and a bit of Baal Red. Makes a nice natural tone for the hair. 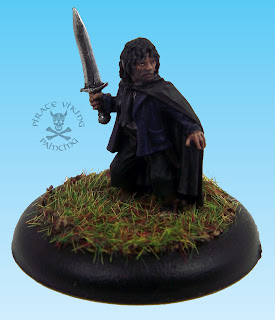 Rogues are the thieves, burglars, murderers and spies of the Pathfinder world. They join adventuring parties to help them get past traps and snares. They hide in the shadows and strike without warning. 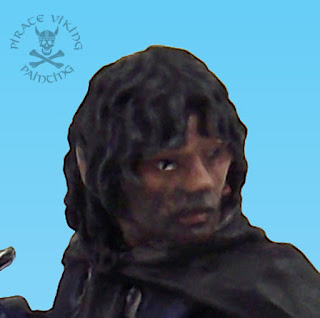 To stop the model looking like Pippin - the return, I decided to use a dark moody scheme. Lots of dark tones combined with heavy stubble make for a grimmer, nastier looking halfling.

So with that I reach the end of the first adventuring party. The next one will probably be the Oriental Adventures party. I've got an old Citadel Dwarf Samurai and Ninja. I'm combining this with a couple of GCT Models Bushido miniatures to represent the monk and Shugenga (an oriental wizard). Next time it is back to Nurgle warriors. I've decided to post mostly on Wednesdays from now on to try to get a bit more order into my output! Until then.