By Jeff March 21, 2012
Eyup all, realised it has been a while since anyone has seen any progress on my Nurgle army for the campaign so here it is! 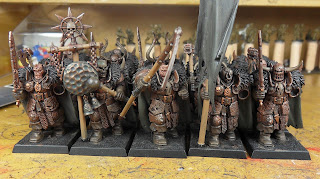 So far it is mostly metalwork that has been achieved. This is slow for me I know but a combination of RealLifeTM and commission projects (for those that don't know that's how I try to make a living!) have gotten in the way. 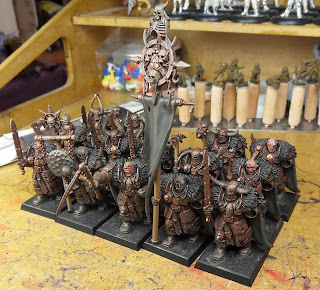 The metalwork is just Jeff-Rust (see here for an explanation of method) the cloth and woodwork is going to be treated the same as the sorcerer as will the bone. The rotting heads will be painted as accurately as I can (and I'm a biomedical scientist) so that is plenty of disgusting reference material in my future. Ironic yaaay!

Currently debating with myself (always a curious argument) about the banner, I kinda want it to be drab and raggedey but I don't want the design to vanish into the background. Design-wise I'm thinking the traditional triple fly icon of Nurgle but colours... This could take thought...

Mercifully this rate of progress will not impede me too much as there are precious few units in the army! More next time, 'till then