The relentless march of the undead

By Maisey March 04, 2012
Hi Guys, if you'll excuse the horrible pun but I've been bitten by the
Vampire Counts bug. I've been racing through the first 1000pts of the
army at a pretty good speed. At the time of writing there is 900pts or
so fully painted on my desk all done in just a couple of months. Not bad
progress by anyone's standards, especially since I'm putting a fair bit of
effort into the basic guys. However, it felt like time to paint a
character. When I'm painting an army I like reward myself for finishing
a unit or two with a character or a tank or some other singular model. I
find it helps to break up the monotony of painting rank and file. In my
first guard army I got terribly excited and started painting through all
the fun stuff first, a tank, a couple sentinels, the command groups.
Then I looked at the rest of the army and found myself staring at 50
basic troopers left to churn through. A daunting prospect even for the
most varnish-hardened painters. Frankly, doing that many basic models at
once is boring, and this is our hobby, it is meant to be fun and I find
being disciplined and following the Unit then Character method the best
way of keeping it all interesting. Not to mention having a second
project to move to once you get Bone Blindness (I promised myself I
wouldn't forget about my Napoleonic army!).

So please let me introduce Mallick Rosenthal. He has the distinction of
being the only living thing in the army so he got a fair bit of special
treatment. Most of his paint job is my regular standard but I put a lot
more effort than I'm normally known for into the face. As you can see, a
little bit of extra effort into the eyes really turns him into an actual
character with personality. 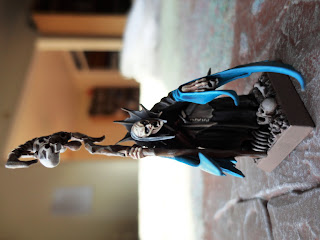 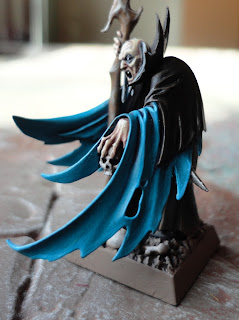 As for the rest of the army I've managed to put together a workable army
already, even if it's not the most effective fighting force the world
has ever seen it's been able to let me get some time on the table. A few
test games to help me learn the army a bit better and make a few tweeks
to the list, as well as giving me ideas for the future expansion. So
what do I have at the moment, well it would have been remiss of me not
to include a big old unit of zombies in any army. These guys are here
for 2 reasons, firstly, they are a sand trap for units. Most hordes are
there to either hold up a unit or deliver lots of attacks. Zombies are
perfect for the holding up job because they simply don't break, they are
average toughness and you can simply raise more of them as Em will
attest to when I held her Choas Knights up for 4 turns until I was ready
to set my grave guard on them. Their second job is to look big and
scary. Which Em will also attest to :P.

Speaking of which, the Grave Guard, one of my 'hammer' units. What I
mean by hammer is they are on the table to dish out the hurt while the
Zombies are the anvil to hold the target units in place. My Grave Guard
are equipped with great weapons and a respectable stat line makes them a
slow but hard hitter, and of course you can always raise more to replace
the causalities. As with the rest of my army I've added the fleur de Lys
motif to their standard and they are done in the same colours to the
rest of the army. Despite my careful camera angles you might notice that
I've still yet to base the back few ranks. Basing is my hobby Achilles'
heel. I loathe it with a passion and it always feels like a chore to me
and I do tend to put it off until there is a insurmountable pile of it
and then have to force myself to do it in one huge batch normally goaded
on by Charlie's comments of "Wow, the army looks really good. It'll look
even better once it's based". So Uncle Maisey's hobby tip of the day
kids is - 'Always do your basing in small batches as you go before it
becomes a painful chore' 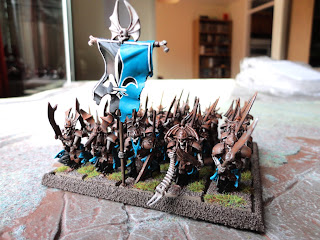 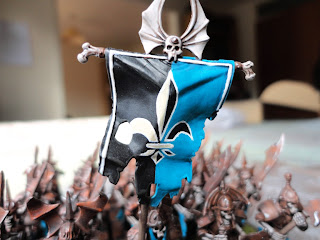 Last but by no means least is the first 2 full units of Skeletons. These
guys are the bulk of my army and a solid lump of hurty for 5 points a
model. The second unit still needs their banner doing, I'm just waiting
for my banner painting Zen place to happen in my head. I have to be in a
certain frame of mind to paint a banner. Also I'm still trying to work
out how to differ this one to its partner's banner. I'm thinking of
including simple geometric designs such as diagonal slashes, chevrons
and crosses to distinguish between the units but I'm open to
suggestions.

So that is where the undead are right this moment. What's next. Well
I've got a couple of characters on the workbench at the moment. One is a
stock model and I'll be posting up some pictures once that is done. The
other is a bit more ambitious and I'll be doing some work in progress
pictures with this one.

Until next time.
Maisey