By Jeff December 20, 2012
Hurrah, huzzah, jump up and down, bang trumpets and blow drums, or whatever. I have completed the first 2000 points of my Dwarfs. The units that finished this first stage of the marathon were a stone thrower (just cannot bring myself to call it a grudge thrower, that's one step away from a Mystery Men weapon) and a mob of Dwarf Warriors. Lets start with the war engine, everyone likes war engines: 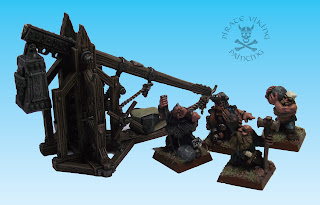 
Lets leave aside for a moment the idiocy of a battlefield - i.e. portable - war engine made of solid steel. Actually, lets not. Steel has a density of about 7.8g/cm3 whereas Oak has a density of 0.6-0.9g/cm3. That means that one of those support struts on the GW grudge thrower - which looks to be about a meter and a half long by maybe 20cm across and 10cm thich - would be 200,000cm3 which in wood would (heh heh) weigh a not unimpressive 150kg. Heavy. But in steel? It would weigh 1560kg, almost 2 tons!! Ten times the weight! No wheels, no pivots, these three are the strongest Dwarfs in the Old World. This would be fine for a wall mounted piece, but battlefield? Ridiculous. That's before we look at the mechanical problems. See, stone throwers work be releasing the ammunition at the peak of the arc of fire so that they fly the furthest possible distance:


There are two basic options, mangonel style designs which whip the throwing arm up and into a cross bar (like the old Dwarf stone thrower, which was beautiful) or the trebuchet approach which uses a counterweight and has a sling release the rock. Then there is the Dwarf idea which is a neat way of distributing rocks from the back of the stone thrower to the earth in front of it.

Essentially, what I am saying - or, well, ranting - is that this is an example of designers forgetting everything they know about the realities of combat and just going for whatever they fancy becuase "It's Fantasy". Well whoop-dy-doo. I like my fantasy with a healthy dose of reality underpinning it. It helps the "a wizard did it" pill go down if the physics surrounding it are grounded in some form of reality! [Breathe Jeff, breathe into the bag...] 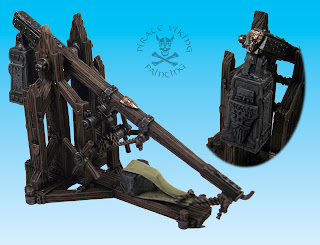 This on the other hand is a gorgeous, lovely piece of kit. It would work if you didn't have to glue it together. I turned all the shields into ancestor heads (dead easy to do) and scraped off the Fleur de Lys before painting. I wanted to keep it very simple, natural wooden colours, canvas, rope and stone. I wanted the sculpting to speak for itself, not get drowned out in complex paintwork.

The crew - like everything else in this Dwarf army - were cribbed from my favourite stone thrower crew models. Working a trebuchet is hard and these three (with their engineer pointing and yelling) get that point across nicely. I was going to use the ancient Dwarf sitting on netted goblin (y'know, for if the ammo gets low or they're bored) for one of them but that model has rather dated now. The final unit of the 2k list was the warriors: 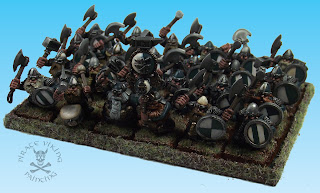 Now sadly, these are the only models in the army that I am not as fond of but there weren't many options. They were made at the post-dawn twilight of plastics and suffer from problems that have now been eradicated. Square hands, elongated thumbs and flat hair to name just three. The command models are even worse so I used the old Skull Pass Dwarfs for them. However I wanted a unit that would look very different to the Longbeards and indeed younger than the Longbeards. So here they are! If a suitable unit ever appears I'll replace them, but for now they look ok under a decent coat of paint and will serve in a stalwart fashion. 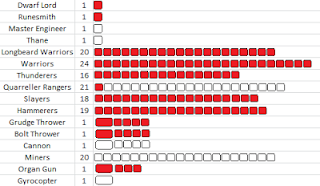 Essentially it boils down to two more block units, two more war engines and a couple of characters! I think I can get them done by late January when the campaign week of unnamed but deep awesomeness begins. Until next time folks.