By Charlie December 27, 2012
I always assumed I’d lost the first model I ever painted, but two days ago, whilst clearing out some junk in my parents’ house, I chanced upon an old, battered GW box. What should I find inside? The best goram paint job you’ve ever seen, that’s what. Feast your eyes on this beauty:

In my thirteen-year-old mind, that was a badass colour scheme. Nothing says ‘dangerous’ or ‘the 90s’ like a bright red boltgun. And caked-on paint. And a Goblin Green base. And... whatever that stuff is on said base.

Why do I bring this up? Well, other than pure comedy value, because a lot of hobbyists come to the conclusion that they’re rubbish at painting, and will never get any better. This post, therefore, is here to reassure you that even reasonably competent painters like me were once utterly crap. Come with me now, on a journey through time and space, to the world of my teenage failures...

Of course no budding hobbyist’s experience would be complete without collecting Ultwamawines, and I was no different.


Of course there was only one way to improve on that masterwork of primary colours, and that was a lurid orange wash.

It’s fairly amusing seeing how my painting style has switched. Nowadays, my fart-it-out-with-some-batch-painting-techniques-tactical-marine looks like this:

Curiosity now reared its head: what other horrors could I unearth? Into long-discarded boxes I dove, and soon learned that my greatest weakness for the first five to six years of my hobby was explosively poor taste.

Shortly after this, I discovered my first great hobby love: the Eldar. I immediately plumped for a colour scheme that entailed a horrible clash (green and blue). 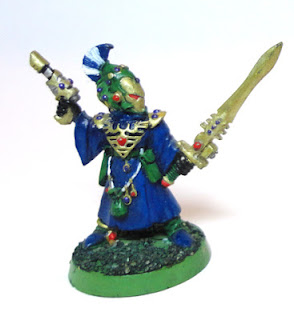 Clearly, though, this wasn’t hideous enough. When it came to the rangers, I had to do something special.

Slowly, though, my technical skills were improving. Here, for example, I learnt how to paint a skin tone that says “Dale Winton’s been swimming in the sewers again.”

Vehicles were a real highpoint. Like everyone else, my first tank featured ALL the mod cons. This beast started life as a Leman Russ Demolisher, but then got turned into a Vanquisher after I sawed up an RAF Tornado’s spare fuel tank. You can’t really see in this photo, because it’s hiding behind the pintle-mounted heavy bolter, but the hunter-killer missile is literally just glued straight on to the side of the turret. No mount, nothing, just love and enthusiasm. I don’t even know what those other missiles are supposed to be. 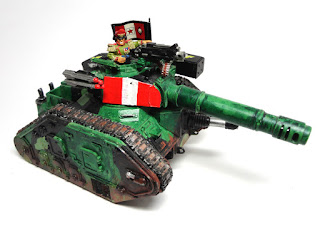 After that astonishing deployment of green ink, I moved on to slightly more restrained territory. This Chimera “benefitted” from a liberal coat of Goblin Green spraypaint, because clearly I loved Goblin Green more than anything else in the whole wide worzel.

Inevitably, though, my skills improved, and my Eldar soon fell victim to repaintitis - a disease whereby you repaint badly-done models without stripping the old paint off first. And you know what? I thought metal paints were the coolest thing ever, even cooler than Goblin Green, and what this Fire Prism needed was some naff, poorly-conceived metal tribal designs all over it.

That said, other Eldar models of the era were starting to show signs of some painting ability. May I refer you to the purple layering on Eldrad’s robes here:

It’s amusing to compare all these to a more recent paint job, like, oh, I dunno, Inquisitor Drake. 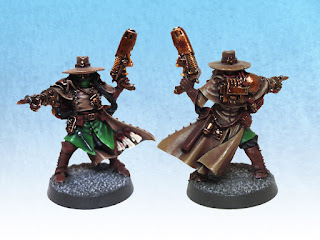 In the unlikely event that you’re curious to see all that silliness in chronological order, I put them all in one image, with date estimates next to ’em:

There. I have nothing left to hide.