By Jeff December 29, 2012
There is a weird piece of music playing in my head, it's Ride of the Valkyries playing on a piano accordian. Why? Because of this: 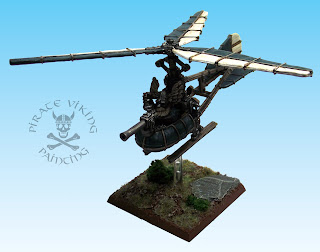 This is a mental contraption, a Dwarf Gyrocopter. It is essentially a wooden and canvas helicopter powered by a steam engine? Physics? Go hide in the corner and cry, for once I don't care. It's cool. These things are used by the Dwarfs for carrying messages between the holds and for recconnaissance. Its such a perfect choice for this army (essentially crusading across the Empire) so it had to be done. Plus they're evil in this version of the rules. 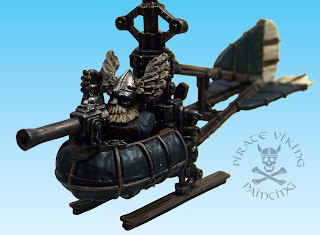 The majority of the painting techniques used have been mentioned before so just a quick run down. All of the woodwork is my Steel Legion Drab with Rakarth Flesh highlights and Agrax Earthshade wash. I decided to keep the canvas sections very simple. Mostly the Stormbourne blue I've used before with just a few bone white sections. The studio one, by contast, is just awful. Its rare for me to criticise another painter's work but seriously, it's just messy. It just not the best advert for the model and the photography makes it worse. Check it out and see if you agree. 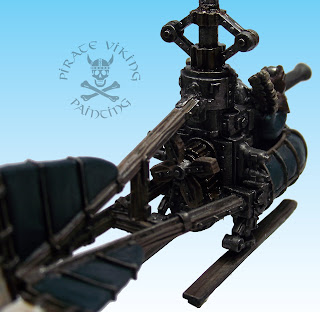 The engine sections are covered in my usual oil mixture (brown ink and gloss varnish or water effects) to make them look, well, mechanical. I think keeping it simple allows the quality of the sculpt to come through and speak for itself. 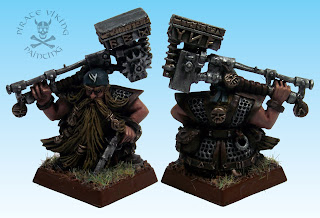 Keeping the machines flying and shooting is this chap. Hwell the Guns; Master Engineer. Not much to say about this model as he's fairly simple. Ridiculous huge hammer (silence physics, gyrocopter has already kicked you to the corner) and chainmail. Now there are lots of engineers in a Dwarf army and the master engineer brings a few extra benefits to the army, one of which is:

Entrenchment! You can hide one of your war machines behind a defended obstacle. This is a set of gabion emplacements made by Anarchy Models. I was trying to figure out how to make these and then spotted these for just a few quid. Why spend hours making them when something this good looking has been sculpted already? They're perfectly scaled for Dwarfs too, see? 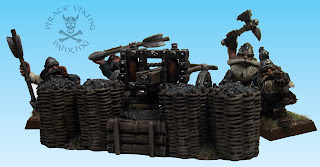 A gabion is such a cunning idea. They're just baskets that you tote into place and then fill them with rocks and earth. They are medieval sandbags essentially. I'm moving on to the rangers next, but am definately starting to feel Dwarf fatigue. The last thousand points I think will take as long as the first two thousand. That having been said, I had just six painted slayers and a shield fence as of November. It's not quite January and I've got 2000 points plus done. Gotta love elite armies. I imagine I will be able to get the last thousand done but that will be my lot for Dwarfs, maybe for another ten years...