Creating your own characters


If you enjoy the narrative element of wargaming, having a story behind a character or unit can genuinely enhance the games in which you use them. I’ve touched on this before when I talked about why I thought it was a good idea to create your own backstories, but with this post I’ll talk specifically about how I create characters in an attempt to be more helpful than polemical. Writing a character can be very in-depth if you’re so inclined (I often am) but for now, I’ll endeavour to keep things simple. Not I Am Sam simple; probably Forrest Gump simple. I don’t wanna go full retard here.

People are understandably cynical about anything that can be identified as ‘formulaic,’ but all the same, a lot of those formulas exist for a good reason. If you want to create a nuanced, lifelike characterisation for your army’s general/chapter master/head boss person thing, then the following advice will only be the start, but a good start nevertheless. On the most basic level, every character needs the following:

In any other medium, that list would also include a want/desire, but in a wargame, that character's want/desire will probably change depending on the scenario/campaign/situation.

Now, why is ‘name’ last? Because names often communicate a lot of what you want to say about a character without any actual descriptions, so it can be helpful to know what you want to say. It’s absolutely fine to have a name first if you’re slapped in the happies by inspiration, of course. The Important thing is that you end up with all four of these things, not just three.

Unfortunately, characters are often written without flaws. I used to make this mistake. If you’re trying to do justice to a character you love, there’s often a temptation to make him Amazingnor of the Uberpeople, but weirdly, the net result is that no-one will like him. Or her. Sorry, Amazingnor just didn’t sound like a lady. Maybe a butch lady. Amazingnora? Amazing Nora just sounds like Wonder Woman’s semi-glamorous assistant. HONK! Oops, there’s the tangent klaxon.

Getting back on track, here are some examples from my Empire army: 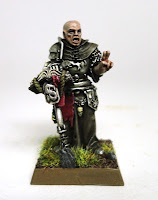 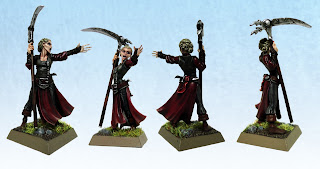 CONCEPT: Intimidating Battle Wizard
QUALITY: Self-reliance
FLAW: A barely-restrained temper coupled with the ability to kill someone with a twitch of her fingers.
NAME: Amelia von Lessing

So, once you have your concept, quality, flaw and name, what might you do next? Well, you might pen their actual story, for one thing. Note that none of the flaws/qualities mentioned above have any narrative element – they are simply characteristics. To put those things into a narrative context is, generally, to explain those traits. Why does Amelia have such a vicious temper? How does Brother Fabian’s cynicism affect the faith of the people around him?

What do they want?
To what extent are they educated?
Where do their talents lie?
What are they really bad at?
What frightens them?
What secrets do they keep?

It goes without saying that there are loads more questions that could be asked, but if you can answer the ones already mentioned, you’ve definitely got a character. How unique or interesting they are doesn’t really matter for gaming purposes; they’re your character, and if you let them make some of the decisions in your games, the whole thing comes to life.