Holy bum grapes, the Beard Bunker is now one year old. And it’s 2013. That sounds suspiciously like the future. An awesome-yet-nightmarish future in which there are only six weeks to go before the Beard Bunker’s long-awaited campaign. Now that the fog of the winter party season is lifting, I should probably survey the damage...

[Charlie]: What ho, Bunker Machine Spirit! Give me a status report.

[Charlie]: The campaign readiness rating is fair enough, but... ego status is at minus one? Why?

[BMS]: You played John again. Apparently you have blanked it out.

[Charlie]: What? Why would I blank out a game with an entertaining opponent like John?

[BMS]: May I remind you of what happened last time?

[Charlie]: Something about un-killable midgets on a train?

[BMS]: You played a 4300-point game with all of your Empire against his High Elves.

[Charlie]: I blanked the whole thing because of one dragon in a four thousand point game?

[BMS]: No, you blanked it because of the White Lions. The Dragon was the thing you paid too much attention to whilst his important units broke your flank and centre.

[Charlie]: Ah. That sounds pretty dumb of me. Did I at least kill the dragon?

[Charlie]: I think I did well just to fit four thousand three hundred points’ worth of Empire dudes in the deployment zone.

...and what of my amazing campaign readiness rating of -46? Yeah, that would be the number of models I have to finish in the next six weeks: 18 flagellants, 25 state troops, and 3 knights. Note that I said ‘finish’ rather than ‘start’. Please, I’m not totally boned. My painting speed is only slightly slower than continental drift.

On the plus side, I’ve just finished the Powderkegs:

This is one of my favourite units in the army; they’re scruffy and full of character. Once the whole army’s finished, I’ll go through all the regiments’ backstories properly, but the short version of the Powderkegs’ story is that they were once a fine regiment of crossbowmen called the Heedenhof Hunters before they were changed into handgunners. It all went a bit wrong. Their propensity for fatal misfires earned them the nickname ‘Powderkegs,’ and it stuck. Oskar Brandt was assigned to them as their sergeant for a while, and he taught them how to maintain their guns; they subsequently went from being the laughing stock of Hochland to being only mildly sub-par. 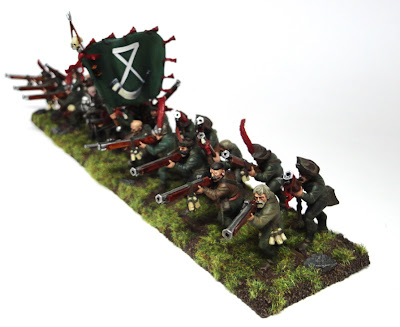 Once again I delved into Uniforms & Heraldry of the Empire for inspiration on the banner.  Crosses are a big thing in Hochland because of the number of garrisons that sit in watchtowers built on crossroads. Hence the crossed hunting horn strap on one side and crossed quarrels on the other. Karl Franz’ shield motif is a fairly significant part of the regiment’s tale as well, but like I say, we’ll give a fuller account of the campaign armies’ backstories in February. 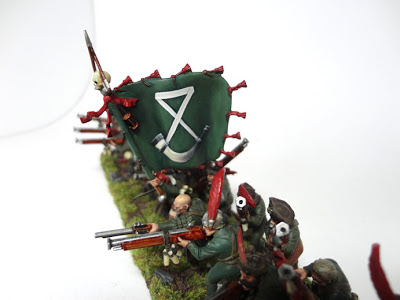 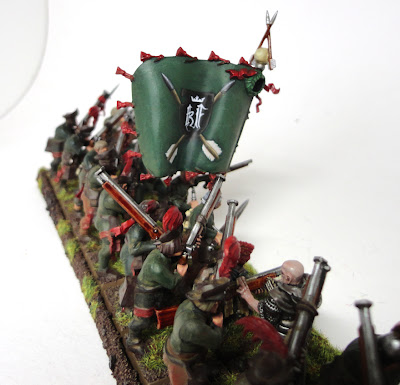 The Powderkegs aren’t exactly the cream of the crop. As such, very few of them are clad entirely in state colours – most of them are wearing their own jackets or trousers rather than proper uniforms, although I kept the colour of said clothing to neutral tones (black, grey and brown) so as not to clash with the green and red livery. Also, everything but their weaponry is rather dusty. 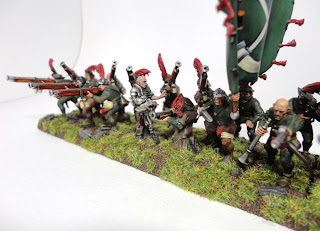 In case you’re wondering why I’ve given a unit of missile troops the privilege of a standard bearer, musician and a Warrior Priest, since one rarely wants one’s missile troops to be anywhere near melee combat, I’ll just go right ahead and admit that when Jen kindly gave me the Blessing of Sigmar kit, I absolutely had to build it into a characterful regiment. That said, a happy bonus is that the Powderkegs are almost certainly going to get charged at some point – it’s pretty unavoidable with a unit this big – and having a warrior priest (and quite probably a captain) sitting in the unit will hopefully make up for their lack of ranks. And their feeble melee ability. Maybe. A bit. Slightly. Maybe? Yay Sigmar?

At this point I’d like to direct your attention to Blind Alfred, the standard bearer. Gawd bless ’im. I’ve paid 14 points for him; he’s literally a model with a hand weapon and a standard. No gun. No armour. But he’ll stab you up, oh yes he will. As you can no doubt guess, there’s a story behind him, too.

The Blessing of Sigmar’s really meant to be a diorama rather than a gaming piece, but I loved the image of a tired old warrior priest being pestered by some nut job for a blessing in the middle of a fight. The posing of these two idiots pretty much inspired their backstories.

Now technically, those twenty guys aren’t the whole regiment – there are actually thirty handgunners and ten crossbowmen in the whole thing. That way, I can have two detachments, or equally Sergeant Kahler can lead some of the men off to one flank and form another independent unit. So, here’s the Powderkegs in all their glory: 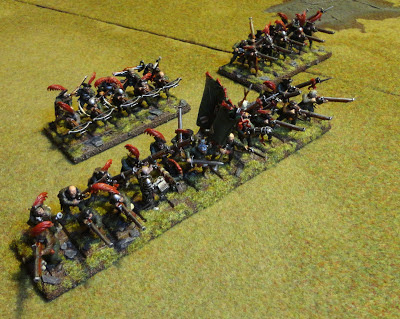 You knows it. Now to finish off those Knights...