I really ought to have seen this coming, I post something Dwarfy and a couple of days later have something else! Shoulda been patient and combined the two. Hey ho, here's a short post! Once more I have used a classic artillery piece. I think I'd be getting boring if I layed into all the reasons why I am less than enamoured with the modern ones. Read this if you are curious. Anyway, the woodwork was treated in the usual fashion: Steel Legion Drab, Rakarth Flesh highlight, Agrax Earthshade wash. The cannon itself uses Runelord Brass which is fast becoming a favourite from the new range.

The crew are cribbed from a couple of different war machines with their engineer attached. I found a new leather tone which replicates that pale tan suedey leather you see on workshop aprons. It's Zandri Dust highlighted by adding increasing amounts of Pallid Wych Flesh to the Dust. The Pallid Wych Flesh has a slightly warmer and beige-r tone than bone does and gives that hide feel. The crew also include another of my contenders for favourite Dwarf: 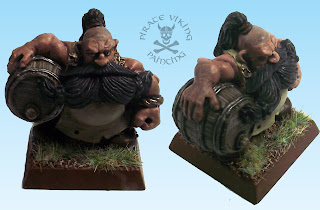 He is one surly mo-fo. The sheer size of him alone makes him look like he's a bouncer in Dwarf taverns when not carrying kegs of gunpowder. Combine that with the badass topknot and the beard which - believe it or not - is an overgrown goatee and he just looks like a dude with whom you do not mess. Something that has worked really nicely on this figure - and it is something I am increasingly using - is the shadowing where the shaved hair should be. This is simplicity itself to paint and really finishes off a bald or shaven headed figure. First mix up a wash made of Dryad Bark, Cadian Fleshtone, Abaddon Black and Mechanicus Standard Grey (gods I miss just calling that "Codex" Grey. 19 characters vs 5. Just saying) in a 1:1:1:1 ratio (I.E. the same amount of each). Add about the same volume of water as paint and then glaze the areas you want stubbly. Avoid tide marks and try to feather the edges a bit. Once dry mix up a wash of pure Cadian fleshtone and then re-glaze the area with it. This knocks the hair "under" the skin and improves the look of the piece. See, simple right? In fact harder to describe than to do.

And with that I shall leave you all again. With these guys complete that just leaves 21 figures to paint. I can't decide if I want to launch straight into the thane with the BSB or finish the miners first and then reward myself with flag dude. Until next time