Five to Beam Down

By Maisey January 21, 2013
Hello All, it seems like the bunker has been on a bit of a fantasy binge lately with everyone focusing on getting their campaign armies up to strength. Since I am a cheeky whatshisname and got the undead up on their feet months ago I've been beavering away quietly on my 40k project. As you might remember at the beginning of the year I decided to resurrect my Dark Angels armies and began painting the odd unit every so often.

Now that the big Gee Dubyah have unleashed a new codex and Dark Vengeance on the world, my Dangles have been getting some love.

Dangles you say? Shush! It's their official, top secret code name for the imminent Nerd Thunder 4: The Guns of Nuvverork. For those who don't know, Nerd Thunder is the Beard Bunker's annual road trip to Warhammer World to play an enormous game of 40k. Go read Charlie's lovely write up of last year's game. Go on, go read while I bribe Charlie with empty promises of toffee to do the magic photo box thing.

So, where was I? Oh yeah! Dangles! I've dutifully painted my way through a couple of tactical squads and their transports as well as a few other bits and pieces so I figured I should reward myself. The Deathwing models from Dark Vengeance are a thing of tiny plastic beauty and they deserved some attention. I'm a big fan of the Greenwing of the Dark Angels and didn't intend to have more than one squad of Deathwing in my army so I was determind to make this squad a bit special. Although, this is subject to change depending on where the butterfly takes me later. 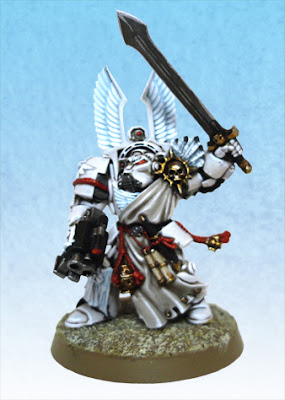 I started with a solid undercoat of Dheneb Stone, followed by a watered down wash of Devlan Mud. Once dry I started to layer up using my new favouritest favourite paint of all time, Pallid Wych Flesh. I wanted to avoid the studio style warmer bleached bone/sepia pallet since that really doesn't do it for me. Partly because it looks a little plasticy and cheap and also because it doesn't quite fit with how I see their backstory. They intended themselves to be ghosts, dead men walking and the warmer tones really don't suit them. I wanted mine to look like cold ivory.


These guys put me in striking distance of my 2000 point target for this list. I've got one of the new shiny Dark Talon/Nephilim Jetfighter kits sat on my paint station. That, however is going to be my reward for finishing the third and final tactical squad and the last few Ravenwing Bikers. Once they are all done and based I'll do a full run down of the army, with a million lovely pictures (if I can find enough toffees to bribe Charlie with).