Because, we shoot to kill and you know we always will

It’s been a while since I last stuck anything up on the Bunker. I have been doing hobby stuff (I promise) but I've been very remiss about turning it into posts here.

So, to prevent Charlie and others propping up the bunker on their own; I've decided to stick some of my stuff up.

One of the reasons that I haven’t posted for a while is because I've spent a lot of my hobby time working on a major project that isn't yet complete. My original plan was to post once the project was complete… However, that would be a very long post and the project is still a long way from being finished.
So, this is a ‘progress so far post’, done in a slightly retrospective manner.

My interest in 40K has taken a pretty savage nose dive since the *arbitrary* new *moronic* 6th edition *inconsistent* rules came in. I hate the current 40K rules and I may put up a whining post at some point as to why I am so out of love with 40K.

Whilst I have very little patience for 40K, I still have a lot of time for Orks.
I decided a long time ago to put together a Blasta Bomma – something about the idea of a massive plane shooting the battlefield to pieces with high calibre ordnance whilst dropping rocket propelled maniacs out of the back just appeals to the rampant Bad Moon in me.

The basic idea that I wanted to work to was the A10 thunderbolt:

Which is a Blasta Bomma in its own right

As such, the premise was to build a straight winged plane with a twin upright tail plane, two dorsally mounted engines and a **** off massive rotary cannon at the front – the deff arsenal.
Having thought about it for a bit, I also decided to build retractable landing gear so that it looked sleeker in the air and plausible on the ground.
It would also let me choose to use the plane either as a playing piece or as a piece of terrain / objective.
In retrospect, deciding to go with the landing gear has made my life considerably harder.

I had the basic shape in mind and had an idea about construction – a skeleton made out of rectangular profile plasticard, supported by plumbing pipe. The engines would be attached using steel bolts and the wings by, er, something… maybe luck and gaffer tape?


This brings me onto project planning.
Whilst making my own bomma, I have been following Red Jacks log about the construction of his Blasta Bomma here: Red Jack's Bomma Log
(Well, not strictly here, but on the now defunct WAAAGH! forums)

Red Jack obviously kept his design much closer to the Forgeworld Blasta Bomma from Aeronautica Imperialis (sorry, can’t find a decent picture of it) than I did. He also planned the majority of his build straight from the get go.

When putting conversions together, I tend not to do significant planning prior to beginning work. This is partly a function of laziness but it also gives me much more latitude to adapt what I'm doing as I go along and as the mood takes me. I think it also helps for Ork stuff as it can give a useful cobbled together look.
I'm not saying I'm right to do scratch building and conversion work in this manner - I sometimes have to take very hard decisions to undo what I've previously done because it ‘won’t work that way’ – but it is one way that it can be done.

So that was a big wall of text wasn’t it? Onto the actual building part. 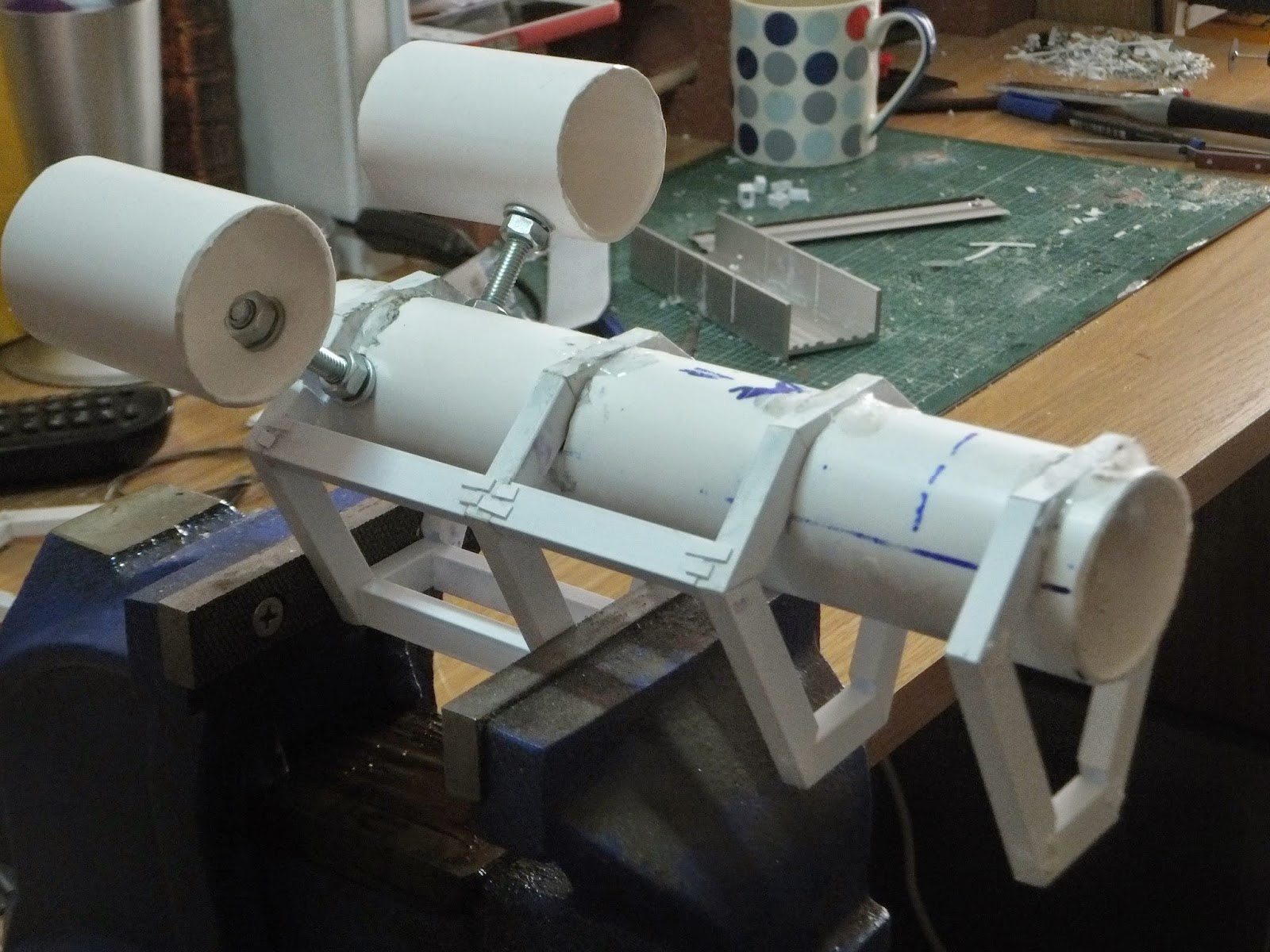 This is the beginning of the skeleton in the vice. The fuselage ring ribs were the first things I made (back in 2011). These were glued into pre-cut slots in the fuselage pipe with 2 part epoxy adhesive.
The engines are bolted into a right angled steel V inside the fuselage pipe.
At this point I already had a flight stand for the plane and the receiving part of the stand (a captive nut in a steel plate) was wedged into the fuselage pipe and glued in with epoxy adhesive.

You might say that it seems like a lot of faff to have the polyethylene plumbing pipe in the fuselage when I’m also assembling a rigid structure around the ribs.
And you’d be right; it is. Polyethylene is a pain to work with as the usual glues and paint I use won’t adhere to it as well as they do to polystyrene.

However, there is method to my incipient insanity, and the pipe is there to:
- provide a rigid monocoque core to the plane
- hold the mounting point for the flight stand end plate
- be a strong attachment point for the engines 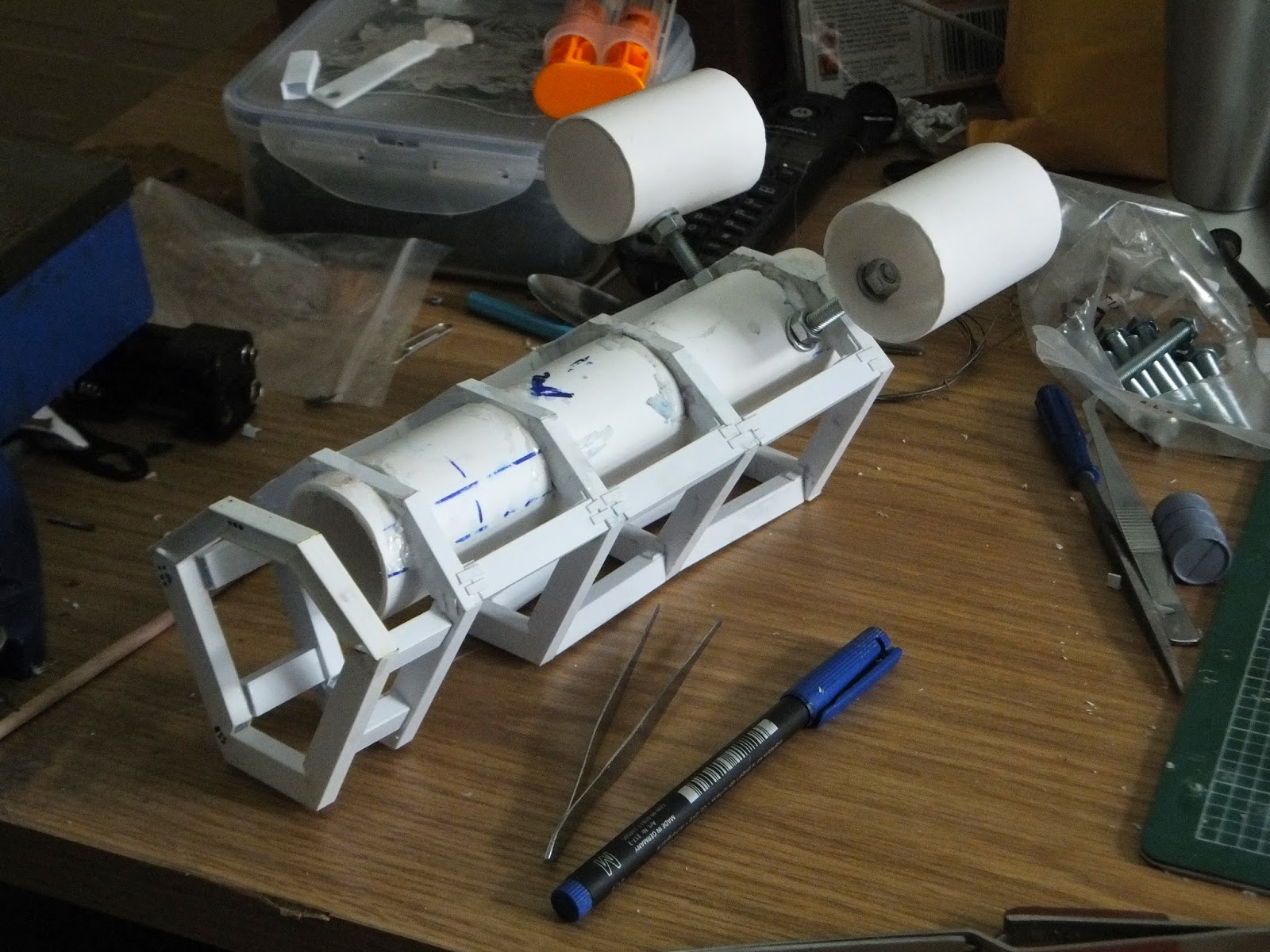 Next step was to reinforce the fuselage with longitudinal supports. I realised quite early on that the internals of the plane needed to be pretty damn solid. Once the final skin of the plane went on it would be impossible for me to fix the internals without destroying the exterior – an idea I am not keen on. The plane would also likely weigh a fair chunk so everything inside would need to bear some of that weight.

And speaking of which, this is the core of the plane with the landing gear attached.
The landing gear will have to support the entire weight of the finished plane, so all the pivots and axle points were reinforced with 1.5mm steel rod. The pivot points inside the plane were all bulked up for support and all abut the plumbing pipe. That way the pipe takes the forces of the structure away from the more fragile polystyrene skeleton.

Having thought long and hard about how to do the landing gear, I decided that simplest option was, well, achievable. Anything else (for me) would have been too complex and not strong enough. So the landing gear just swings up and down along the axis of the plane - simples.

The front wheel was offset (just like the A10’s) to give the impression of room inside the plane for the cannon’s firing mechanism and ammunition.

That’s it for now. This was a big post in a seemingly random order. I hope it is at least one of  interesting  and useful for all those of you out there planning hefty projects like this.

Next time, the plane will start to look a bit more like a plane…