By Jeff April 06, 2014
If there is one thing I love most about campaign gaming, it is the daft side plots that develop. The unit champions that seem to be invulnerable. The characters that don't get on and never seem to pass leadership tests while fielded together. Sometimes it's just memes and in-jokes that take on a life of their own. The Popular Goblins' Front are one of these that has not only taken on a life of their own but are actively expanding almost beyond our control:


This all started during a game where Charlie and I combined our respective goblin hordes: my (mostly) competent Bitter Moons and the collection of incompetence and infighting called the Bloo Moons. During deployment I assigned Joodee the Shaman to a regiment of Bloo Moons with a certain degree of trepidation. I was right to be worried. After taking the bare minimum of casualties to justify their fleeing (25% break test from shooting) they turned tail and fled. Taking my shaman with them. All the way off the table. We decided that they were some kind of splinter cell of the Bloo Moons, The Popular Goblins' Front, who had kidnapped my shaman. We wound up running a scenario to rescue Joodee but the PGF were well and truly born. Since then, we've blamed the PGF for all sorts of in game effects. A unit fails three animosity tests in a game? Clearly PGF involvement. Fanatics go off the rails and destroy our units? PGF Sabotage. So strong is this increasingly involved story that I had to make these guys. Finally I came up with a reason to do so. Animosity markers! When a unit fails an animosity test I'll use these guys to mark it so I don't forget.

These are not a terribly complex set of conversions. Just snip off the top of spears or add shafts in place of bows. Drilling and pinning a small section of movement tray plastic made a placard. Then rectangles of paper thin plasticard are roughed up with a scalpel and glued on. Finally, thin discs cut from plastic rod are glued on to represent nails. The wider banner is handled the same way only instead of a placard it is glued directly to the shafts and then heat is applied to bend it into the correct shape.

Painting goes in the exact same way as the regular night gobbos but with red hoods to indicate their socialist fervour. The red is shaded with brown to make it dirtier and more desaturated. 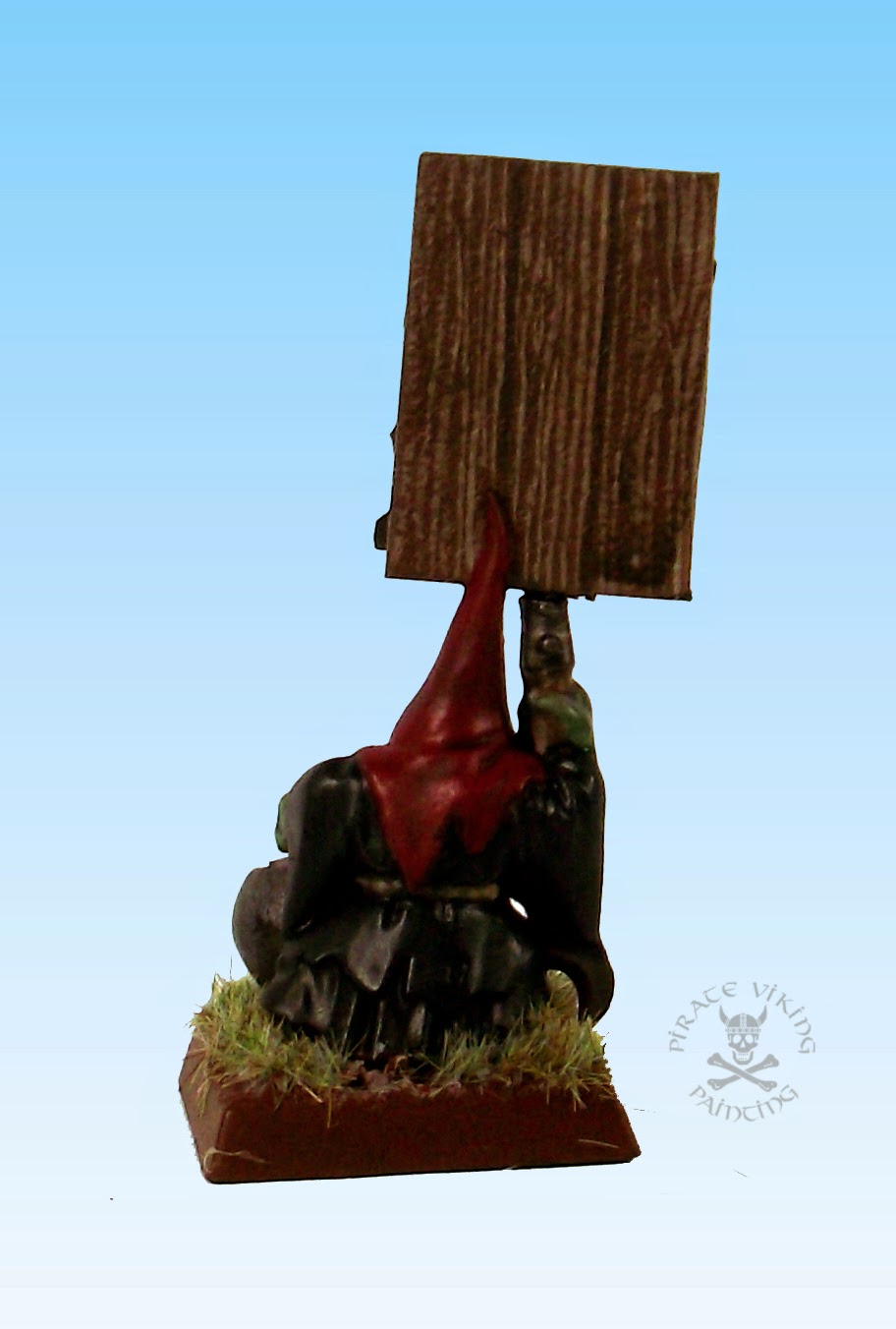 Planking is not only an irritating and out of date internet wotnot, it's also making a plain piece of plasticard look like woodwork. It's easier than it looks. Vallejo Beige Brown forms the basecoat, adding Vallejo German Camo Black-Brown leaves a dark tone to paint in thin lines to delineate the individual planks. Then mix more Beige Brown with Vallejo Deck Tan (to be honest, pick a brown, make it darker with dark brown, make it lighter with bone tones) to paint on thin streaks of wood-grain. Wibbly lines work better than perfect straight ones, occasional loops, whorls and knots give a more believable feel. Finally a glaze of Agrax Earthshade finishes the tone.

Finally I perverted a few common far left, anarchist and anti-war slogans to a more goblin tone and painted them on. Examples include:

Evryfink fur Evrywun and Nuffink fur Arselves... wait...
All Gobbos is One fat Gobbo
All Power to tha Soshulist Orker
No waaagh but the class waaagh
Fight da boss not iz wars
Da Control of Teef is control of life
Da rich gobbo knows da poor are his slaves
1,7,9,4 we don't want your feckin' war

and my favourite: Drink Coffee, Proper Tea is Theft

These will now be used to mark a unit which is either in an official work stoppage ordered by the Goblin's Popular Front (squabble) or in a fight with a rival branch - the Popular Goblin's Front, the Front of Goblin Populists, whoever - representing the "Get 'Em!" result. I can also tell that this is not going to be the end of this. The Popular Goblin's Front will almost certainly get bigger. They're only supposed to be animosity markers. But I can already see more in the future. A whole unit probably.

And that's why I love campaign games.