By Maisey February 12, 2017
Back in the glorious summer of 2016 I set about a little personal project to create a North Africa themed collection of models and scenery. I've already posted a little about before in I've Got Sand In All The Wrong Places. Well I've finished the British and Australian section of the project and now ready to get started on the board.

I had several options when it comes to creating the actual board it's self. Firstly I could try and lay my hands on one of the good old Realm of Battle boards from Games Workshop. They were great boards, if a little on the pricey side. We have successfully created a desert board from these before by sculpting mud cracks over the skull pits. This gave the board a dry feel and was pretty simple to do. A second one of these would mean we can take the one that Charlie owns and create a huge 6'X8' or 4'x12' gaming surface for those really big games. This plan met a fairly terminal halt when I discovered that GW don't actually manufacture the Realm of Battle boards anymore and they have been replaced with a 40k specific urban board and a AoS specific board that really didn't take my fancy for the price.

I did consider trying to source a load of extruded polystyrene foam sheets, and it does have to be extruded not expanded polystyrene for it to work, to create my own gaming boards. I had started a design with both lowered and raised areas and a pile of scatter scenery. The cost of which, once you took into consideration the foam sheets, the varnish, paint, and various modelling materials to do it justice, had started to spiral into the same as a pre-made board. Then you would have to factor the time need to make into the equation. Plus also considering I've never done any serious scenery scratch building before there was a real danger of it never getting finished. Especially with my attention span.

I went back to scouring the internet. Eventually I stumbled across the Secret Weapon Tablescape Tiles set. The price was a lot closer to what I wanted to spend* and there was a good selection of sizes and landscapes. Currently available there are the following designs: 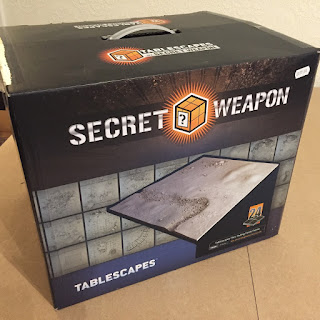 Forgotten City: This is a series of tiles with ancient city ruins. Could look really good done up as either a dark, brooding gothic city, or would work amazingly as an Aztec looking ruin.

Rolling Hills: This would be a good base for a temperate grassy board. Several of the tiles have a nicely sculpted river sections as well as rolling hills (funny that).

Scrap Yard: This one would make a great Mad Max/post apocalypse board with sculpted piles of debris, abandoned vehicles and tire tracks. Also anyone thinking of doing an Ork themed board should have a close look at this one
Urban Streets - Clean: A gridded city street. Some of the sections seem to have some fairly sci-fi affections it would be great for a futuristic city fight board.

Urban Streets - Damaged: As above but damaged.

After careful consideration I ended up ordering the Rolling Hills, as it was plain enough to fit with any period/setting and the (dry) river bed would be fitting with the ditches and scrubby settings of coastal Libya. 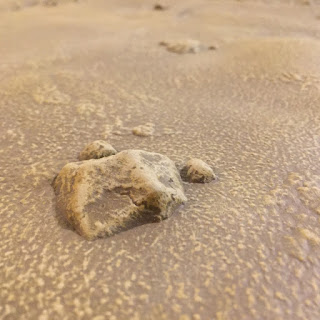 At this point there was a little bit of a hitch. Actually, quite a big hitch. It transpired that I had somehow managed to order the wrong board! How, I'm still not sure, but I can only assume that because I had my shortlist open on different tabs I had clicked add the cart on the wrong tab. Let this be a lesson to you all, always double check your basket before you click the final button.

At this point I had four real options.
Guess which option I went for?

Now I own two gaming boards. It was clear how I was going going to paint the Rolling Hills set, but what to do with the Forgotten City set? After much internal debate, and some external debate, eventually I decided to just put the Forgotten City board to one side and wait for the opportune moment to use it. The Tablescape Tiles box is certainly sufficient is size to store the main set, plus probably a few extra boards, as well as all the clips, and takes up a lot less space than a realm of battle board. However it is only card and I can see it wearing out over the years and becoming an issue. There might need to be a creative storage solution in the future. 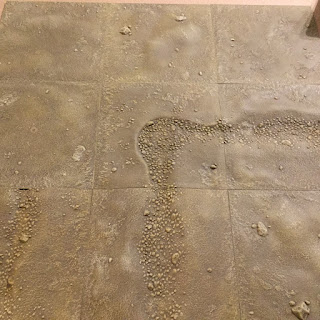 Each design is made up of 12"x12" tiles and there are around 16 unique tiles per design so there is very little duplication. Each design also comes in multiple sized sets. A full 6'X4' board requires the 24 tile set. It is simple enough to mix and match from different sets to get the landscape you desire, especially when they are all available in 4, 8, 16, and 24 tile sets. The sculpting and variation is top notch, there are very few 'huh? what is that doing there' type moments when looking into the details. No random objects that seem out of place or skulls that have been added 'for the aesthetic'. The tiles themselves are quite small, but the boards come with a rather neat system of clips that slot underneath. They actually fit really well, well enough that I have no fear of the tiles coming away from each other, and the clips are smooth enough. The corners do leave me a little bit nervous about the durability where they are particularly thin, and how that will hold up in the long term with the clipping and rearranging. The downside to the multi-tile system is setting up takes a while longer as you need to unclip and re-arrange things. This really is only a massive problem if you're doing a series of games during a day and want to mix up they layouts. 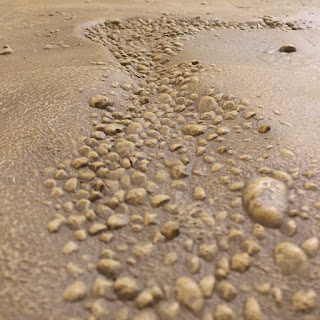 Painting the Rolling Hills was a very straight forward affair. The boards have a good amount of texture and detail already built in, and without any unnecessary affectations sculpted into the board. When we created the first desert board using the GW Realm of Battle board we went to our local DIY store and used their paint matching service to make up some large tins of Khemri Brown, Desert Yellow and Bleached Bone equivalents.  Now these colours no longer exist in the Citadel colour range, but the huge tins of emulsion paint we had made where still sitting around at Charlie's house. So armed with those, a 3" brush and the first 4 StarTrek films** I set about the board with gusto. One issue that has arisen from the moulded details. They great to look at but have caused some problems when it comes to placing scenery, especially on the Forgotten City board, as well as model balance issues. For the most part it's fine, just a few little raised areas that cause metal models to tumble.

I primed the board using about 1 and a half cans of chocolate brown spray, again picked up from the local DIY store's give-me-the-cheapest-spray-paint-because-I'm-painting-a-huge-area-and-I-had-blown-my-budget-out-of-the-water-with-two-gaming-boards range(tm). Then simply painted and then dry-brushed the colours up until I was happy. Job done. 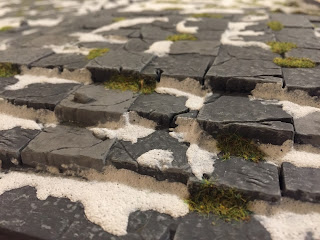 It wasn't until later last year, possibly December time, that we arrived at the decision to give Frost Grave a serious go. Suddenly the need to have a full sized urban board arose and I had the perfect thing sitting in our hobby cupboard***. So two trips to our local DIY store later (The paint I had picked for the base coat was too light and ended up as one of the midtones so I went back for something darker) we had all the materials we needed. Spray primer, a good sized tub of dark grey (that might look nice in the bathroom if there is enough left over) a mid grey, a selection of random tester pots of various different mid and light greys to give us some tonal variation on the flagstones (DING!) and a light grey for the final dry brush. For this board I was being a bit more adventurous that with the desert board. I planned to have stone, grass AND snow on this board in an attempt to depict an ancient and ruined city emerging from a long winter so I had picked up a cheap vat of PVA glue, a couple of boxes of soda crystals, and a pot of white acrylic paint. I started with priming the board black, then a solid coat of a dark asphalt grey, then went through with the mid grey tester pots painting a random selection of flag stones, rubble, rocks, with a bunch of different shades of grey, then a final dry brush of the lighter grey to blend it all in. 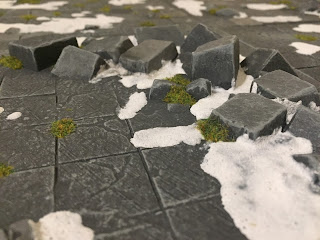 Next up came the grass, this was just a normal static grassing with focus on the crevices and areas where the designers had sculpted on soil/dirt patches covering the flag stones. After that I got messy with the snow. This was a mix of PVA, soda crystals and a little bit of white paint. I can't tell you in what proportions I added the materials in, but I just kept adding soda crystals until it was a slightly runny porridge consistency and a good squirt of white paint for luck. Then I just set about adding snow to where ever seemed like a good place to add snow. I think overall the effect was a decent one, if a little laborious. 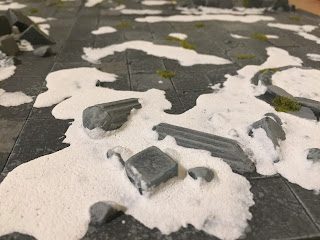 I'm actually impressed with both boards. The quality of the casting is decent and crisp enough for a gaming board and required no preparation beyond taking them out of the box. The clip system works well and hopefully will stand up to repeated use and changes. Both boards where nice and easy to paint. Hopefully the storage won't be a problem but I can burn that bridge when I get to it. The scenery not always sitting level, for me isn't a great deal of an issue, but I know I'm going to have to be careful with balancing models. 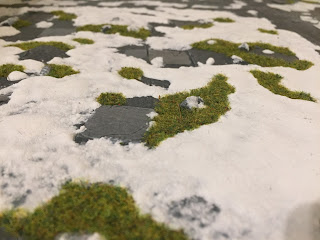 Overall I'm happy with the boards and the niggles are just that, niggles that won't stop me enjoying my purchases.

*The current price seems to be higher than what I paid, I can only assume that some of the global and political events of the second half of 2016 have affected the exchange rates, as Secret Weapon is an American company.

**Now TV had put ALL the StarTrek movies on to a single playlist.

***Or the cupboard under the stairs as most normal people would call it.