Thanks to a looming deadline and the continuing hobby bender initiated by Total War: Warhammer as described in my last post, another Shame can be struck from the book: the merchant's shop. 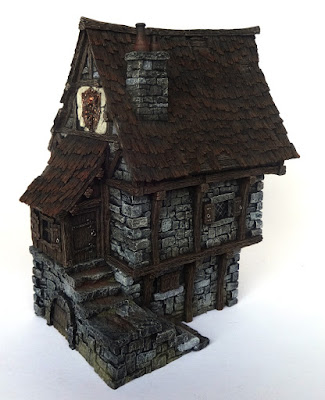 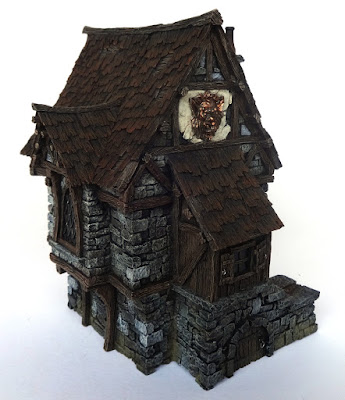 As with the other two tabletop world buildings wot I done painted, these models have such crisp casting and sculpting that they're just satisfying to paint. With this latest one I've introduced a little tonal variation to attempt an increase in sexiness. In as much as one can think of a building as sexy. All those firm timbers... dem saggy roofs...

Like all Tabletop World sculpts the merchant's shop has interior detail, and requires no assembly beyond gluing the balcony to the first floor. Each floor is held in place via gravity and parts of the model carefully sculpted to hold the building in once piece until you need access to the interior in the middle of a roleplay/skirmish scenario, like so: 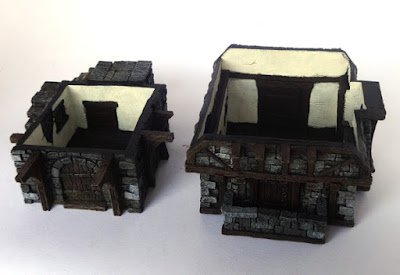 I should at this point add that in a fit of laziness, I only basecoated the interior. SHAME. SHAME. SHAME. To give you a sense of scale, here's the shop's stock room filled with... stock. And a captain of the Empire, since I don't have a painted customs official. 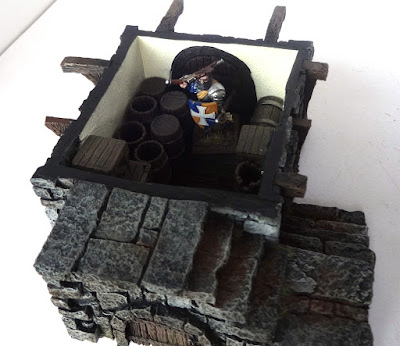 I'm curious as to how widespread the use of Tabletop World's stuff is. I have no sense of how many people buy and use their stuff, although I get the impression their rep is steadily growing. Is that the case? Have any of you glorious bastards got your mittens on them?

Next time, I'll share some photos of the smithy. In case you're thinking "pff yeah right Charlie never actually does the thing he says he'll do next," I'll have you know that (a) that's a fair point, but that (b) I've already painted it, so ha!
~Charlie