By Charlie July 14, 2017
Charlie: I now have exactly two weeks until the deadline, and out of about 40 models I have now painted... one truck.

Everything's gonna be fine. A hundred percent fine. I mean, I've primed the other models and that's like 1% of the battle already won! 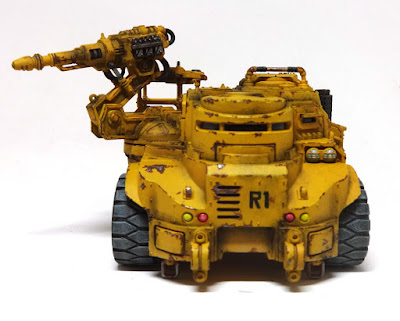 Overall woes notwithstanding, let's move on to the truck itself. The goliath truck was one of those kits I wasn't entirely convinced by when it was released. Whilst Andy pointed out that the drilldozer blade is probably a homage to a certain scene in Total Recall, it still looks utterly preposterous. Furthermore the standard twin autocannons and pintle-mounted heavy stubber make it look like a purpose-built military vehicle, which is the opposite of what this thing is meant to be. Thus, I ignored the standard build in the game's rules and built it so that it looks like an industrial vehicle with a dangerous piece of equipment that could be used to cut holes in tanks.

Whilst this thing could be a mining rig, in the context of our Deathwatch scenario it's going to be an emergency reponse vehicle that uses its industrial laser to breach the hulls of crashed ships to extract survivors. Or, you know, cut space marines in half.

In case you're interested in how I'm painting this thing, here's a step-by-step:

Basecoats
I needed the paint job to both say "industrial" and "easy" since time was of the essence, and thus opened the festivities by spraying it with the Averland Sunset spray, which was bloody marvellous. Well played, Citadel. The spray was followed up with a few thin layers of Yriel Yellow, then an edge drybrush of Flash Gitz Yellow which, to be honest, I probably could've skipped. At this early stage I also painted the old calthan brown foundation paint onto any areas of bare metal, but any mid-brown will do. 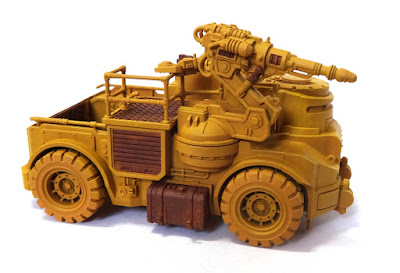 Next, I slapped a mid-grey on the wheels and wires/hoses, then drybrushed a mid-silver over the mid-brown. Why all these mid-tones, you ask? Because of the next step.

Wash dem mid tones
Next I thinned some army painter black paint, since unlike Citadel paints this stuff remains matte when watered down. This got sloshed over everything that wasn't yellow. This is pretty much my standard method for quick and dirty rust, although you can spruce it up very effectively with some rusty weathering powders. The wash also took the tyres down a few tones and thus made them look more rubbery.

Once the wash was dry, the tyres got a grey drybrush to simulate dust on the road, deliberately focusing on the treads rather than the rims. 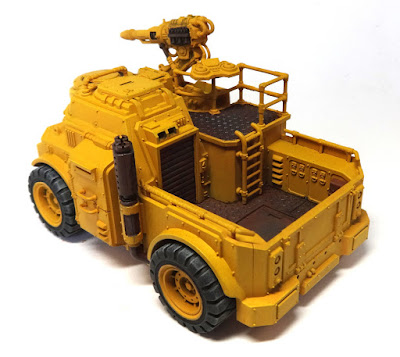 Chips n' dings
Next comes the longest stage by far: the chips in the paint. Using the same mid-brown I'd used on the areas of bare metal, I went over most of the edges and other bits where I wanted the paint to look worn away. This felt like it took forever, and could be speeded up substantially by stippling with a drybrush instead. Once that stage was finally finished I quickly dabbed some silver into some (but not all) of the chips to give them some depth and distinguish between old and new dings. 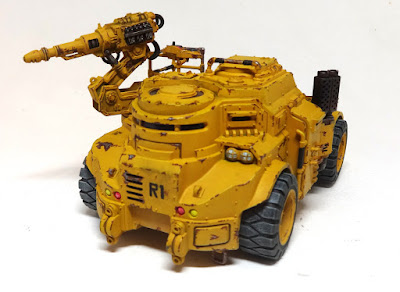 At this stage I also painted the lights and buttons, basecoating with Ceramite White (the gods' own paint, that) and putting a thin wash of colour over the top followed by a gloss varnish. If you're painting a light source, undercoating it with white gives it a natural vibrancy that makes it pop out from the rest of the model. Again, super simple... I make no claim to painting something impressive here.

I also drybrushed black paint over the exhaust to provide soot, and drybrushed silver over the bare metal areas to add another layer of depth. 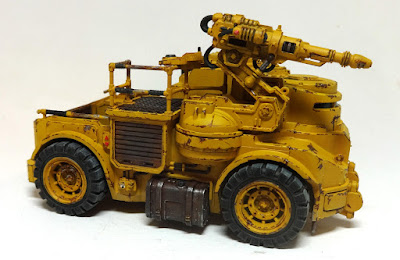 Filth
Finally, when all's done comes the final stage: black weathering powder. I'd use Typhus Corrosion if this was in a muddy environment, or grey dust if it was in a mine, or... whatever; pick a colour for the bases you're giving the rest of the army. This cult is based in a hive, so sooty pollution made sense to me. I just rubbed black powder into many (but not all) recesses with an old drybrush and voila, said ERV Goliath looked like it'd been around the block a few times. 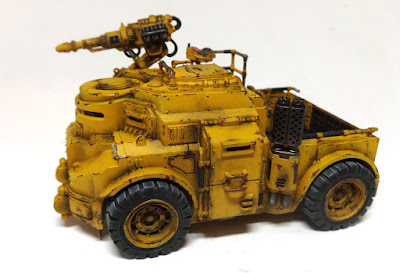 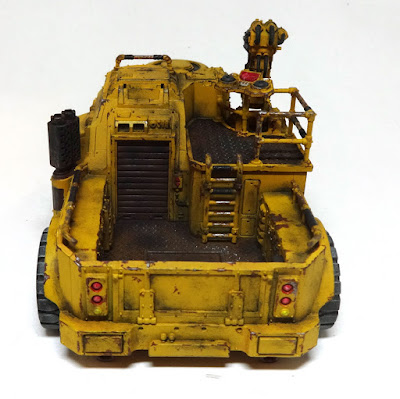 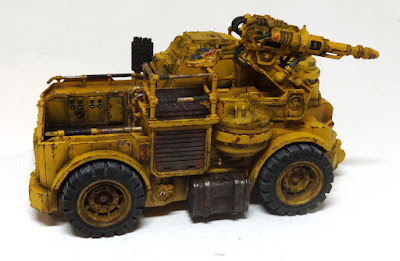 Now do to the crew. And the hybrids. And the cultists. And the characters. And the--oh wait that's a secret.

I'm curious about how other people have painted their goliaths, if they have 'em. Having painted one, I actually really like the kit, and may well convert one for my orks. Might even get another if I decide to use the cult as an army in 40K at some point.