Charlie: Now that the dust from Saturday's game has settled, I can reveal whether or not I did indeed succeed at batch painting a genestealer cult in three weeks, particularly since the models are no longer swathed in a blanket of secrecy. The answer...?

Now I should couch this triumphal tone in reminding y'all that I had help. Andy joined me for a ten-hour painting binge in the run-up to Saturday's game, and on the Friday night Jeff spent a few quality hours on the magus so that I could scamper upstairs and spew out stat lines (we're using the RPG engine we developed, which of course means rules for 40k characters only exist if we write them!).

After all these posts, I'd be remiss if I didn't provide a photo of everything that got painted over the last three weeks, so here it is: 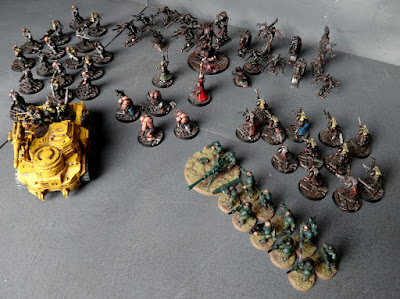 Much as I can't claim any of these are masterpieces, I am satisfied that they look solid on the tabletop, and this has been the most concentrated dose of painting I've had for years. Possibly since I was working in the FLGS, which was... yeesh, about six years ago. Hobby whiplash much?

Inevitably there were some flies in the ointment, among which were the fact that following the exact same sequence of paints on both the goliath and the cultist's armour resulted in different shades of yellow - largely because of the black grime wash the models got, and a difference in primer colours - almost all the models were sprayed with Mournfang Brown, whereas the truck was sprayed with Averland Sunset.

Basecoating
This seems like as good a time as any to sing the praises of Mournfang Brown spray. It's not advertised as a primer spray, but as a basecoating spray. I confess I sprayed it directly onto the plastic without a primer, and it worked ok, but produced a slightly chalky texture that probably wouldn't have happened if the models had also been primed. This generally wasn't a problem, although the magus was the most pronounced victim. Basically, don't cut corners with your character models. Or at all, if you have more pride than me.


Technical whoopsies notwithstanding, the advantage of a brown basecoat is that the transparency of most paints is mitigated by having a midtone beneath them, and if you miss a few bits, it just makes the cloth look dirty and the metal look rusty. Ideal for batches of grungy troops.

Basecoats were slapped over the brown undercoat, starting with the messiest (the metal drybrush) and finishing with the tidiest (the yellow). The cultists don't have a uniform, so a variety of colours were used. Once fabric, metal and rubber areas were all basecoated, the whole model got a wash made of thinned black paint, which provides more low-lighting and a more matte effect than GW's nuln oil. I used Army Painter's black paint, since it tolerates being thinned out quite well.

Once the wash has dried, the metal areas were given a light silver overbrush to give contrast, the fabric was highlighted by using the same colours used for the basecoats, and the flesh was painted.

Skin tones
I wanted the cult to have a variety of skin tones present, but I also didn't have time for infinite variety so I stuck to three different tones. All three tones follow the same method: basecoat, wash, highlight with basecoat colour. Here's what the three skin tones look like: 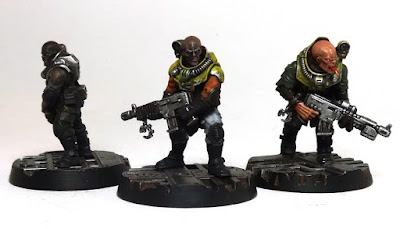 So the sequences go thusly:
With the skin painted, any models with long hybrid tongues got Blood for the Blood God on them. Everyone then got a thin dark blue wash about the eye sockets and bugman's glow on their lower lips, plus bone for the teeth and white/black for the eyes.With darker skin tones I find eyes and lips to be completely un-skippable, even though I was going for speed. The second generation hybrids also got a thin wash of red gore around the back of their craniums to give an added hint of alien weirdness, although it's hard to tell from my sub-standard photography. 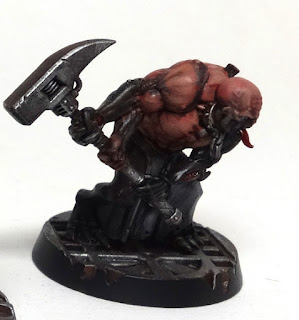 PDF reinforcements
One of the secrets to keep was the presence of some military cultists. I painted some neophyte guardsmen up in the same colours as my platoon of mechanised infantry, then sprinkled them among squads of guardsmen to temporarily convert my whole guard army into a big, tank-filled problem for the kill team.

Acolytes
The acolytes were painted to have the same insectoid brown-black carapace as the genestealers. This is an extremely simple method that's hard to photograph, but basically, bone is drybrushed over the brown basecoat, then the whole area gets a wash of undiluted black ink (specifically ink, normal washes don't have the coverage for this). Tongues and sinew are spared the ink, instead painted with blood for the blood god.

Purestrain genestealers
Finally, we come to the stealers. My hope was to hint at the xenomorph from the Alien franchise, hence the slightly brown-black coloration. They were given the same treatment as the acolytes above, so were extremely quick to paint, and rather satisfying. They also scared the the everloving quiffle out of the players, except Maisey, whose Dark Angel was a member of the Deathwing and took such problems in his stride. That said, he looked about as unhappy as everyone else when the Patriarch showed up. 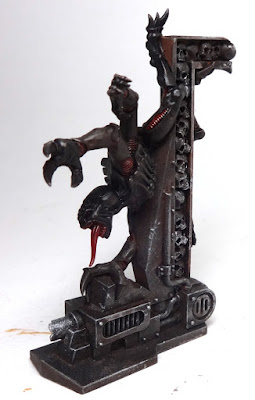 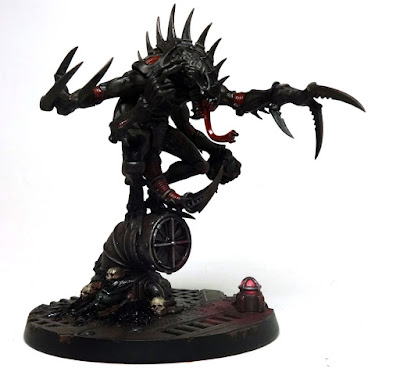 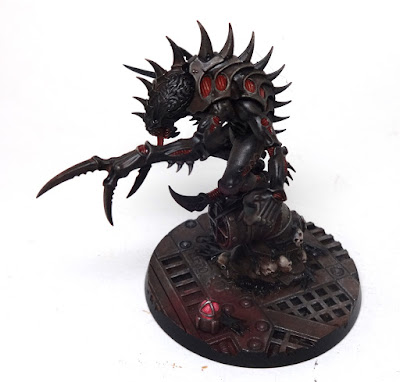 As with any light sources on a model, the lamp on the patriarch's base was painted white then got a thinned-down layer of the old Red Gore so that it was brighter than everything around it. The surrounding area, including bits of the patriarch, were drybrushed with Red Gore for a quick half-arsed OSL effort.

In case you're wondering, I also sculpted some alien goo onto the patriarch's base to help blend it into the Sector Mechanicum base I'd plonked him on. Said goo was then painted gloss black because grimdark and... shiny. 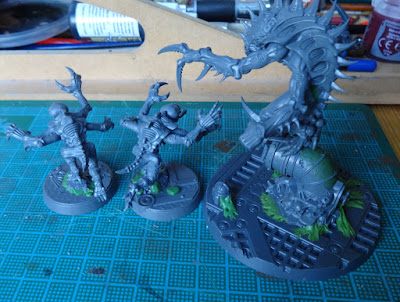 I also have to give a fan-squee shout out to the sculptor of the patriarch. None of the players had seen that model in the flesh when it was put down on the table, and they all came close to peeing themselves. It is one of the most imposing minis I've seen for a while, and a large part of that is its menacing pose. Well played Mr Sculptor, well played.

That's it for the three week cult! Hopefully it's been at least somewhat amusing. If there's some element of the painting you have questions about, such as "why would any sane man paint all those cultists in one giant batch?" or "why aren't the genestealers blue and purple you heretic?" then ask away in the comments.

I'll be back soon with photos Jon (and others) took of the day itself, with all the scenery and marines and the Storm Eagle thwooshing overhead.