Eagle-eyed readers will have seen these chaps make their debut in the Iyanden vs Blood Angels picdump from a couple of weeks ago. Sadly they got their shiny model syndrome rubbed right off owing to my rather underestimating what Wraithguard D-Scythes could do. Eep. But now they can get their due with shiny pictures.

Long term readers - and those that followed me over from Pirate Viking Painting where the majority of my Blood Angels lived - will remember that my head-canon for the Blood Angels is a little different to the studio norm. I'm running the 3rd as a classic Tactical Company with occasional BAngel flair. This squad is one of those oddities. They are actually the 6th Tactical squad mounted on bikes in order to be outriders for the armoured column. I always thought they made more sense as a mobile tactical squad than fast attack. Bolters, a heavy weapon, special weapons, a sergeant. Just because they go fast doesn't mean that they're not a fairly normal Tactical squad. So Sgt Gadreel (seen above with the chainsword) just gets the hogs and rides out. 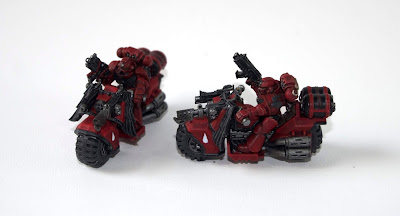 Bike squadrons can take a couple of special weapons and I liked the idea of using the fuel from the bikes to run flamers. Hence I converted some flamers into the Ravenwing bike farings (very appropriate for the Blood Angels I thought) and added the cut down cannisters from redeemer sponsons on the back as auxilliary fuel supply. In order to remember that they still had twin-bolters I modelled each with a bolter of their own in order to stay "legal". As though the Bunker cares all that much for such trifles.

In much the same way as Land Speeders, Attack Bikes are the perfect platform for multimeltas. They move fast, get in close and thus can take advantage of that close range damage boost. Especially now you can split fire it makes little sense to take the heavy bolter. Anything that will shrug off almost forty bolter shots is not going to be terribly troubled by a few more at a marginally higher strength. So instead Squad Gadreel gets some anti-tank punch. 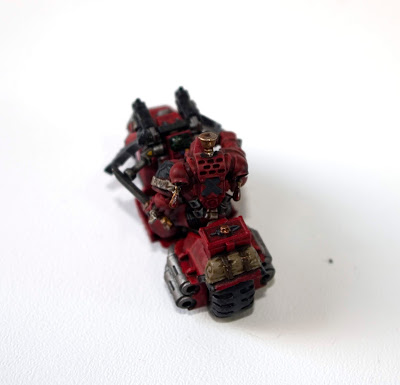 As I'd nicked the Ravenwing fairings I also had a bunch of the nifty pannier boxes. I liked the look so on they went too (the ones without obvious DAngel imagery anyway). You can't quite see but the screens are painted to look as though they have ground scanning radar advising the rider as to the contours of the terrain.

While I've found painting these to be quite the trial (there is a LOT of painting in bikes) the finished effect is wonderful. I love the way they look on the table and the image of them riding alongside the tanks when contact is made and then them speeding off to repel assault is glorious. While I might have sworn off painting any more space marine bikes... scout bikes don't count... might need some of those...