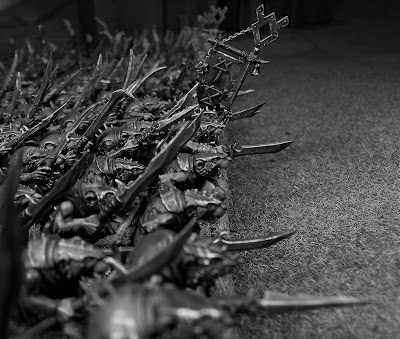 Hello again, and welcome to an army showcase for my Skaven. I've written it in two parts. Part one will consist of rambling, mostly inspired by Maisey’s discourse about why we do what we do. Part two will be the actual point of this post – which is for me to show some rats.

Part One - What makes you tick?

In the last blog post, Maisey examined what it was that made him go down the hobby routes that he did, which got me thinking about the hobby choices I’ve made. So I thought I'd pontificate on this for a bit.

I have two armies; Skaven for Warhamster and Orks for 40K. In both cases, I started small with the intention of creating a defined nuclear army and then got totally carried away.
My time is limited, so it is likely that I will stick with these two armies for the foreseeable future.

What was it that made me go mad on just one army for each system?
Well its not that Skaven and Orks are the only armies I would ever consider buying and building.

Indeed, there are armies that I could quite happily (with time) get involved in. These include but are not limited to: Dark Eldar, Empire, Ad Mech, Chaos Dwarves and Astra Mili-Copyright-Friendly-tarum.

On the flip-side, there are some I will just never get on-board with, including Space Marines, High Elves, Eldar, Lizardmen & (modern concept) Grey Knights.

So why is that?

Well. I think there are three key areas of appeal for a gamer / army collector. I have assembled these into a handy Venn Diagram.

And I think this needs a little more explanation, and much of this will be important to a lesser or greater extent depending on who you are. However, this is what is right for me.

Models
I like an army to have a good range of contemporaneous models with a consistent design language and interchangeable parts. The army must look right, make sense, convey an element of danger or cool and be visually interesting to look at. The range must allow me to make it my own through conversion or customisation and mustn’t be too derpy.

Fluff
There has to be an emotional hook for an army, and it doesn’t need to be the same for each player of the same army. This hook could be pride and loss (Dwarves), desperate battles against overwhelming odds (Space Marines) or it could be the concept of existential horror (Tyranids).

Whatever the hook is; If its done well it should make me curious about the army, engage with the politics or motivations of the army and allow me to ‘believe’ the army on a more intuitive level. The best fluff will not only give you information about the army in particular but will inspire and give you the latitude to go in new directions or create new things with that army.

I don’t think you need to necessarily sympathise with your army, as long as you understand its motivations. I mean; what sort of backstabbing, morally vacuous, treacherous weasel could sympathise with the Skaven?

Finally, there’s the question of how the army plays. This is a lot more personal than the other two as it links into balance. Now personally, I don’t care too much whether an army wrecks face or not, as long as it isn’t completely useless. Others will have a much harsher view of this as they’ll be looking for armies that can cut it at the bleeding edge of ÜberKäse.

For me, I like armies that have a lot of different options, allow you to field many different units and have a random (especially a comedically random) element. This fits both the Skaven and the Orks very well indeed. I’m fervently hoping that the upcoming Ork Codex has expanded rules for the Shokk Attack Gun – It doesn’t need the eight pages of rules it originally had, but it needs more than what it has now.

They have good models, which I can convert. They are twisty, treacherous little bastards who love to plot against their own allies and will always be the cause of their own downfall. If you can take the odd mishap* and snigger in gleeful delight when one of your dirty trick does pay off**, they are the army for you. 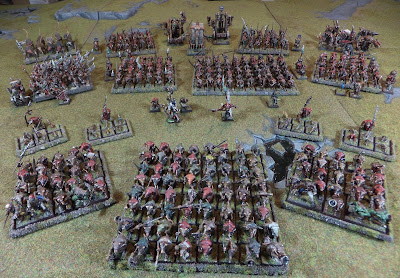 This is the complete army. I think it tots up to around 4,000 points in total and has around 400 models (of which most are clan rats) in it.

In short, the grand general, Lord Voltik is a megalomaniacal evil scientist with a proclivity for metallurgy. His raison d’etre is the development of a new type of steel for his army that will allow his Warlord Clan to deominate the region and bring him (by force and stabbing and forceful stabbing) up to the table at the Council of Thirteen. As such, the army has a bias towards Clan Skyre tech. Plague monks are not represented because (insert handwavey fluff reason here) the plague monk models are crap.

The army is going to be red, because I like red. Analyse that Freud.

There are a lot of Clanrats in this army, which I see as only right and proper. A horde army should be a horde of filthy shod, otherwise it’s not a horde army.

I’ve tried to differentiate certain units with the use of standards and dress markers at the corners. The Stormvermin have banners at the corners – an idea I got from the film ‘Kingdom of Heaven’ between fits of Orlando Bloom induced narcolepsy. This is to make them look more Leet.
The furnace guard are Lord Voltik’s usual unit and are corner marked by braziers and a brazier standard instead of a banner.

The main characters are split into the Warlock Engineers and their hired help – the Warlords.

Voltik is the brains of the outfit whilst the Warlords (Voltik and Ektrikk) provide the fighting experience and the competence. Then Sh!twhiskers comes along and ruins everything.


Why no-one within the clan has yet killed Sh!twhiskers is not certain. Certainly, he would be more use dead than alive in most of the battles in which he has fought. It might be because he knows the secret for brewing Skavenbrew or it might be because his indescribably irritating familiar, Lord Provost Percival Cholmondely Fetheringston-Warner IV might end up latching on to someone else in the event of Sh!twhisker’s death - which no one else could tolerate.

The plagueclaw catapult has been converted to be more mechanical and now runs off a steam piston rather than a heavy weight. The warp lightning cannon has had minor conversion work to look a little less flimsy.

These contraptions are guaranteed to let you down when you most need them to work properly. Invariably, this is Sh!twhisker’s fault. 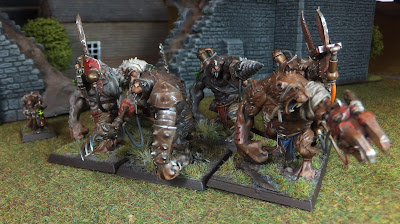 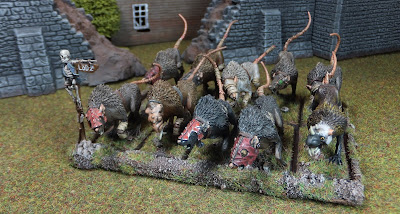 The rat ogres are conversions from the Island of Blood boxed set as the older rat ogres are awful models and the wolf rats are pretty much stock, with the exception of a couple of head swaps.

Note for Polish readers: I didn’t realise Łódź was a place until I ended up going there for work a couple of years after I painted the Wolf Rats. Sorry. The city centre is pretty, and I saw absolutely no gigantic killer rat/wolf animals whilst I was there.

Well, the death of regimental Warhammer has damped my enthusiasm a bit, but I still have plans and these include:

** Like when your opponent loses half his elite troops in turn 1. Snhhk snhhk snhhk snhhk! If you can't take a joke, don't play against Skaven.

*** A name given to him by Sh!twhiskers. Sh!twhiskers is devoid of many talents which he believes he possesses. Humour is just one of them.