By Maisey May 07, 2018
Welcome to another edition of Maisey doesn't stick to the damn plan. In this episode Maisey abandons his plans to get the last of his unfinished undead models complete before starting anything new.

Maisey will now stop talking in the third person.

Yep, I totally stopped working on the last of the skeleton units. In fairness I was trying to do a batch of 68 skeletons and a character. Which is a pretty large batch of models (unless you play Skaven). Once I had finished painting the skeletons I took a pause before beginning the basing, which was a fatal mistake. 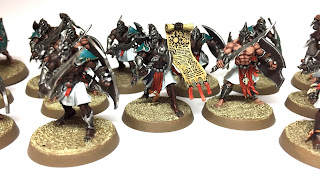 At some point during this pause someone made the decision to start talking about doing a narrative PVP 40k campaign. This campaign would see the Thousand Sons, Craftworld Iyanden, and the Imperial Guard thrown together in a 'yet to be revealed to the players' situation. So I got a little excited and tore into the box of Kairic Acolytes that I had been saving for later.

Kairic Acolytes? Yes Kairic Acolytes are an Age of Sigmar kit but I liked them so much I thought 'to hell with it, lets have them count as Tzaangor!' So I did. I briefly thought about using them as cultists, but they are some what larger than your regular murderous fanatic. I mean seriously, check out the photo below. These dudes are basically the size of a naked Space Marine. If a Rubric Marine could actually take off his armour I mean. 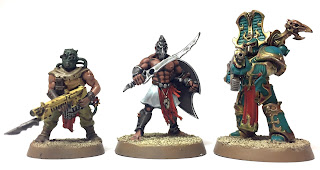 This is a fairly obvious case of scale creep. The Rubric Marine stands eye to eye with a Primaris Marine and the Kairic Acolytes might actually be the same height, if they had shoes on. The poor cultist on the left is actually pretty hench but compared to everything else in Tzeentch's menagerie he's seems pretty tiny. I didn't include a Tzaangor in the shot but they are somewhat taller still than the Rubric Marine. Well, maybe not the Rubric Marine's hat.

Now for the painting. Most of it was the same colour palette used elsewhere, the bright red and white fabrics and the teal armour plates. Only difference with these guys is the lack of gold. The major part of the painting was the skin which I have attempted to represent a range of skin tones commonly found in northern Africa, Egypt, and the Middle East. I'm not sure I've been successful, but that's more down to my poor painting skills than anything else. I did spend sometime searching for good reference material and tried to replicate that using what paints appeared to be closest. You can find the detailed reference Here. 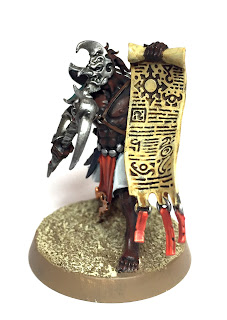 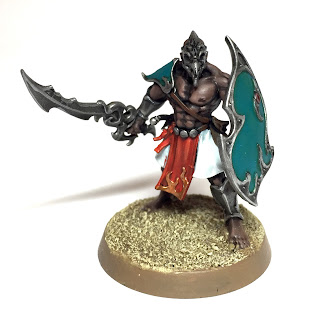 Things I like about these models. All the little Tzeentchy details scattered about the model. They are physically impressive without looking ridiculous. The masks are a wonderful addition, not least of all because it means I didn't need to paint faces! Things that I don't like about these models. I think they could have made them smaller, but with the same proportions, just scale them down a little. Whilst they are a multi-part kit, they are part of the current trend of essentially really nice mono-pose models. Sure you can tweak little details, like the heads and shields being interchangeable, but this still doesn't stop there being duplicates within a single kit. 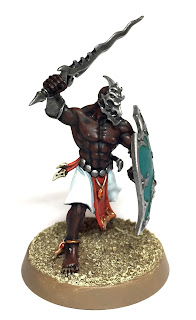 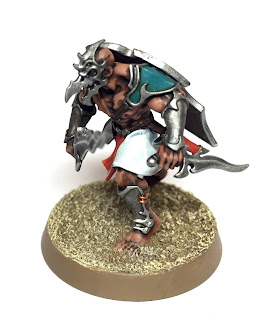 So, what is next on the painting table? Well I have a Tzaangor Shaman that I picked up, partly because it's a cool model and would sit well with the large pile of Tzaangor I now own. It was also because I was a couple of power levels short of reaching POWER LEVEL 100 (sorry, that needed capital letters) and the Shaman seemed like the most effective unit for the power. Also on the paint station is the beginnings of a converted Soul Grinder. Which is being converted into a Tzeentchy Defiler. Which means sculpting battle cannons and other shooty things onto the daemon's arms.

Let's see if I manage to finish those before getting distracted by something else!