A face only a mother could love. Genestealer Cult #2 - Acolytes

By Jeff May 07, 2019
Last time we prowled around the surface levels of the House Ortag Refinery and Mineral Exploitation Plant. There we met some people with funny looking heads but nothing too weird... but now we're in the sub levels and things are getting... claw-ey...

Yup, they're back and this time they brought grandpa... the Acolytes are the earlier generations of the cult, still more genestealer than person and more bestial in mind. They thus favour the close up rough and tumble over more considered shooting.

Like all the rest of the Star-born Souls (hey, check it out! I named them!) these acolytes are dressed in the jury-rigged remains of the pressure suits and coveralls that the neophytes wear. So other than the skin colour, all other painting details remain the same... in which case, let's talk skin! This is another step down on the purple train towards genestealer. They start from pure genestealer purple and are highlighted up with Cadian Fleshtone. All the chitinous bits are a purpley black. I wanted to step off pure black as I thought it would be a bit too stark.

The leaders (and presumably one best friend per squad) get these nice roughspun robes to wear. Like with the tabards on the neophytes I didn't want to introduce another colour into the pallete and the home-spun look works for the lower ranking folks. I want to save the opulance for the Magus and the like. Doubtless if I do an Iconward they'll have fancy robes to distinguish them from the other Acolytes. To push the "rough fabric" look on perfectly smooth plastic is tough but tiny stripes crosshatching across them give that woven feel. Both leaders got hand flamers mostly just... because really. It was a way of marking them out and rare pressies go to important people. 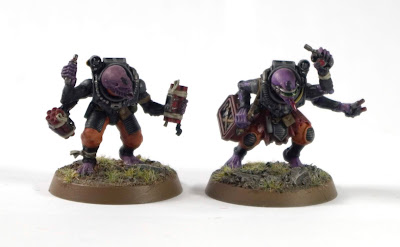 Each squad also gets one explosive obsessed nutter helping make things go boom in the night. These are the demo charges that you can have quite a lot of in an acolyte squad. I decided one each would be quite enough.

No such restraint with the huge gribbly power tools though! I wanted one of each in the army and a rock drill in both squads as they are character/monster/tank killing horrorshows. They can just keep grinding in and tearing more and more wounds off as they go. As with all the other repurposed tools they're painted in House Ortag red with the occasional safety markings in ubiquitous hazard stripe.

And there you are, 20 acolytes done and dusted for the Star-born Souls (it's really growing on me). Only 12 more neophytes (which are half done on my painting station) and the core of the cult is complete. Only random fun stuff to paint from there on in! Till then