By Jeff May 27, 2019
I talked in the first episode of this series about the existential horror of the Genestealer Cult. The loss of free will and the corruption of the love for one's children. Well, I think there should be another layer of horror added in. The fact that humans make stupid, stupid choices and there will always be some who will willingly drink the Kool-Aid so to speak.

When I was first thinking about GSC models, it was mostly for roleplay purposes. So I'd decided to have some brood brother type human allies along for the ride so as to increase the amount of genestealer in the cult gradually. The more I thought about it though, the stronger the desire to have some actual willing humans among the cult. They might be there because they are anti-imperial and the stealer cult gives them the best chance of sticking it to the man; or because they have convinced themselves that the stealers are some next step in mankind's evolution; or just because they're suicidal and want to go out in a blaze of glory. Once there then there can be some hypnotic indoctrination and so on, but honestly? I find it way scarier to acknowledge that there will always be a tiny percentage of the human populace that happily sign up to the monsters. We see it all the time in the real world.

The other advantage was I could stick a bit more gender diversity in there. When the original GSC boxes were made GW hadn't had it's common sense moment and started including women. You look at the later kits and there's several, GW having been dragged kicking and screaming into the 20th century (date deliberate...). Having seen Charlie use them before, I knew that Statuesque Miniatures did some lovely female heads for conversions. Their "heroic narrow" [NOTE: this has now been renamed "heroic small"] scale works best on the GSC neophyte bodies. All I did for other conversion work was slim down any exposed forearms taking away the visibly bulky musculature that doesn't come as easy on female bodies (unless you're actually a bodybuilder of course). This gave me a small, but noticeable faction within the army and gave me a happy.

Of course, I wanted some human looking dudes as well, and as luck would have it was collecting Orlocks for Necromunda. These heads look perfect as the sort of roughneck oil drillers and so on. You have to cut the necks on both sets of heads and use the collars from the original GSC heads to fit them. This is of course trickier on the metal female heads, but the plastic Orlocks just bond together perfectly with a little plastic glue.

Rather than have a "human squad" I divvied up the humans among squads 1-4 of the 5 neophyte units in the army. I like how because of the pressure suits and matching colours and basing they just blend in. Doesn't matter that there's hair, they're all part of the horde. Oh, and while we're talking squads... 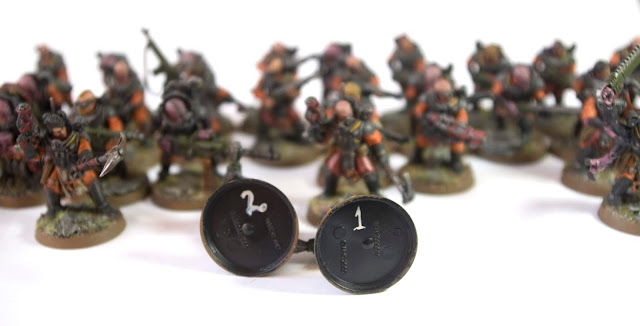 This tip is so simple it barely counts as one but with an army like this, you tend not to want squad markings. So how do you quickly and easily sort them for deployment and disambiguate squads that might have gotten excitable and moshed together in assault? Well, number the squads on the bases. Everyone in squad 1 gets a 1 and so on. Like I say, probably teaching to suck eggs, but every idea is new to someone!

With these painted every troop unit I've planned for the army is done, 70 loyal servants ready to lay down their lives for the cause. Now I have the joy that everything else in the army will be fun stuff. Characters, weird squads, vehicles, yay! I shall shuffle off rubbing my claws... ahem, hands... in glee and figure what next to paint. Till then