So, it was my turn to do a post, which is why it's late. In fairness, it wasn’t my fault: Malal made me put it off.

In short, this is my gang for the upcoming Necromunda campaign that we will run as soon as everyone finishes their gang.

A quick note about the models: I used the cultist models that were originally released in the Dork Vengeance box set back in 2012.
(Yeah, I’m only just painting models I bought seven years ago. My pile of shame is a terrible thing to behold.)

Anyway, the truly great thing about the models is that due to their excellent sculpts, they kind of write their own backstory for you, which is handy when you’re dealing with a small unit game like Necromunda as back story for these characters helps bring them to life.

Most of the models are stock, with a couple of head swaps from the Empire flagellants kit. The Psyker is from the Blackstone Fortress game. In general, I really like these models. The sculpts and the poses are excellent and the details bring out bits of the character of the models. 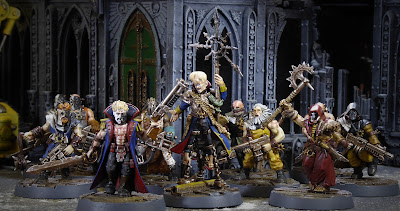 The basic shtick of the cult (The Sons of Betrayal) is that the leaders (Ex Imperial Guard, hence the swanky robes) escaped from service with the (noble?) intention of turning Chaos against itself by worshiping the minor Chaos deity Malal - A Chaos God who hates Chaos.

These two then sought those locals who had managed to ruin their own (or other's) lives through acts of violence, carelessness and addiction and persuade them that is was the work of Malal and that they weren’t to blame really. If they gave service to Malal they would be rewarded.

I painted the cultists in a non-uniform manner – I wanted them to look like a ragtag collection of people from different backgrounds (still wearing the work clothes they ran away or get sacked in) rather than a unified force. To pull them all together, I used the black and white split colours of Malal on their surplices.

The sort of person who ruins their life and then blames someone else for it is the sort of person who is probably quite happy to perpetrate hideous crime for a possible reward from a dark God.
For a bit of fun, I’ve decided to include a little bit of flavour on how some of these cultists ruined their lives and ended up running with the cult.

Quick note of explanation: We intend to run our Necromunda campaign in hive Sejanus - capital city of a sub-sector of the Imperium that we've been using as a setting for Inquisitor RPGs for years. This sub-sector runs on relatively sensible rules and is a little less overwrought than the general 40K fluff. So some of the concepts in this may seem more 'mundane' than the usual GW canon. 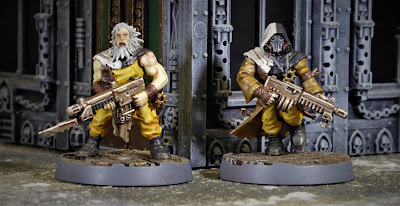 Left: Crane driver for the city’s main dock. Long term alcoholic. Dropped a container on a Munitorum official and was instantly dismissed. Now can’t hold work due to his addiction.

Centre: Worked as a mechanic on Maglev system. Killed colleague in an argument about a minor gambling debt.

Right: Worked as system sub-controller on Maglev. Became addicted to opiates when his implants began to hurt and caused a derailment when high. Ran prior to investigation. spent three months carrying out violent muggings for drug money prior to joining the cult. 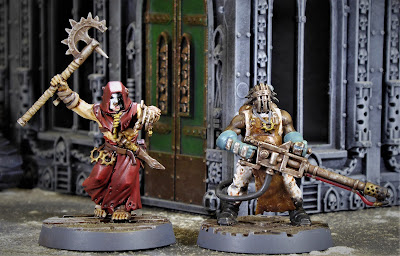 Left: Cult enforcer. Worked in HR for Administratum. Murdered several people in his Hab block in order to get better accommodation. On the run from the Magistratum.

Right: Worked in one of Pigtown's many slaughterhouses. Hacked a supervisor and manager to death with a meat cleaver. Reason unknown. Now runs cult’s annual barbecue.

(In terms of painting, the Butcher has blood spatter on his white overalls, and I chose the colour of the gloves to resemble something fairly ‘clinical’) 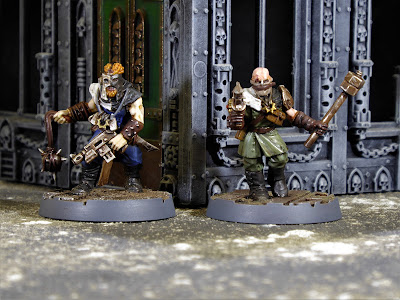 And that’s my gang for Necromunda. Don’t have any sympathy for them, they’re all quite hideous people.