All right, calm down Sméagol. They don't have wings, they have a crudely designed, home workshop assembled, jump pack. That's better, right? 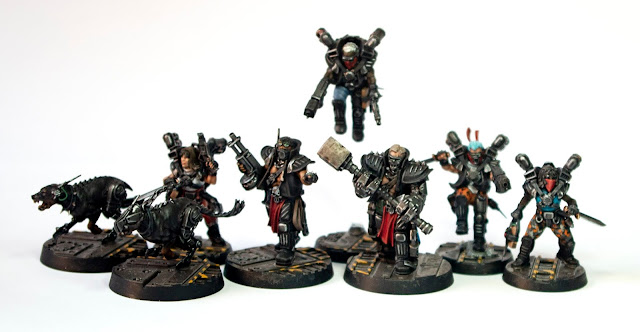 As anyone familiar with this blog will know, I am a teeny bit obsessed with Necromunda. In particular the mad biker shotgun enthusiasts: The Orlocks. My own gang (the Blood & Chrome) have been already expanded to the size of an Imperial Guard Platoon and I figured I was done! I was out! Noooooope. They drag me back in, and all because GDubs just had to go and release an upgrade box for them. An awesome upgrade box. An upgrade box with doggos. 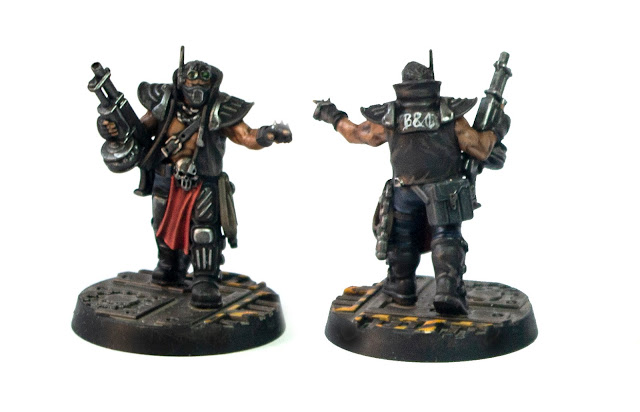 I started with the bog standard Arms Master as I figured I needed to flex my Orlock painting muscles after this long away. I decided he needed kind of a Latinx vibe so went to my old favourite skin painting rainbow (ranging from Burnt Umber, through Beige Brown and into the Citadel "skin tones"). I haven't named any of these chaps and chapesses yet as I'm not currently playing - stoopid pandemic - but rest assured. They will all be nommed by me plume at some point. 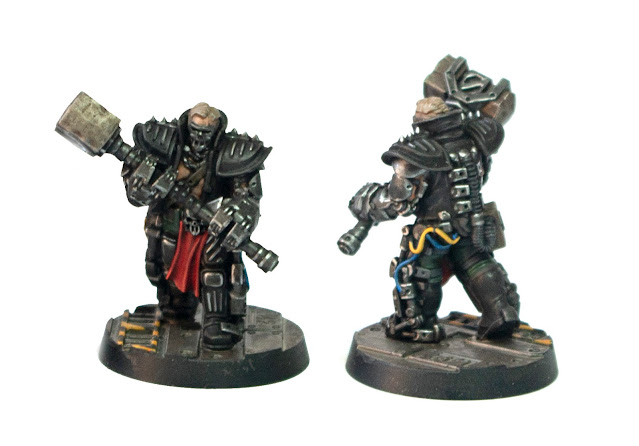 Then, giggling a little, I tackled the World's Biggest Tool. That hammer is insane. I love it. The fact that he needs a full servo-assist rig to even swing it is wonderful. The rig itself is also lovely, even if edge highlighting all that steel caused me pain. I wanted to differentiate the hammer head from the rest of the metal so I gave it more of a rusty tone. As though it's cheaper steel that they swop out when it's a bit too munged up by smacking a fool. I think in this gent we have met the leader of the entire Blood & Chrome outfit. 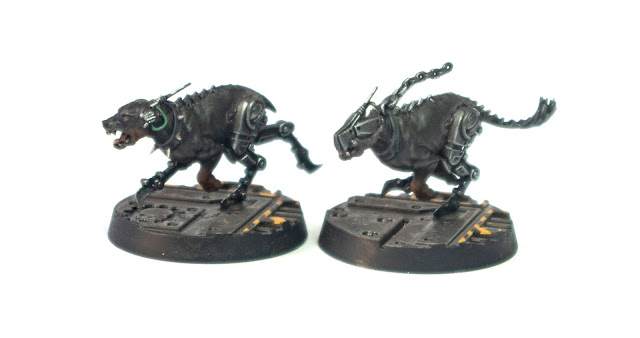 Next up were the doggos. I love these and am so, so happy they are in necromunda. Better yet, in my gang. I spent a bit of time online and concluded that their shape was closest to a Doberman Pinscher. That meant a very dark coat with nice tan bits here and there. Of course, that also means that the camera hates them. Could I get a shot where the dogs were nicely focussed and colour fidelity? Could I hell. So forgive me for the next image...

Urgh, I know. Sorry about that, but it means you can see the pinkish, sore tissue around the implants and repairs. It's far easier to see in the flesh but that old devil camera just loves to slice through thin layers of glazing. 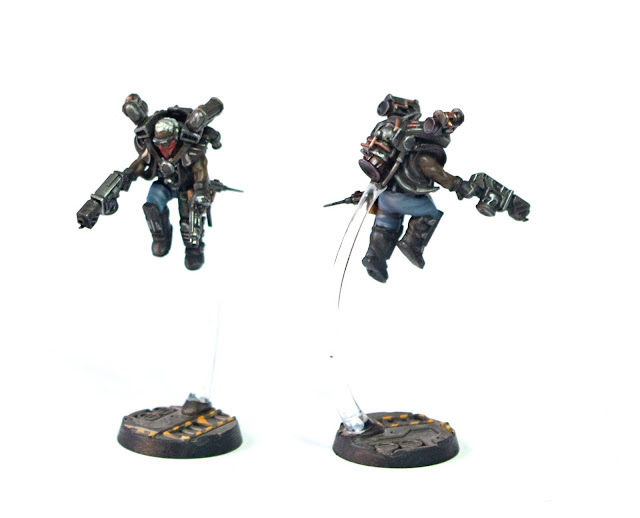 We now come to the first flying friend. I love the concept for these and it fits really, really well into the Blood & Chromes road warrior/convoy raiding vibe. I only made the one on this new flying stand because I am (mentally insert that gif of Fry narrowing his eyes) deeply suspicious. Love the energy it gives the flying model, not convinced about the durability. Oh, this chaps hair is indeed inspired by the Marquis de Carabas in the BBC adaptation of Neverwhere if people my age were curious. 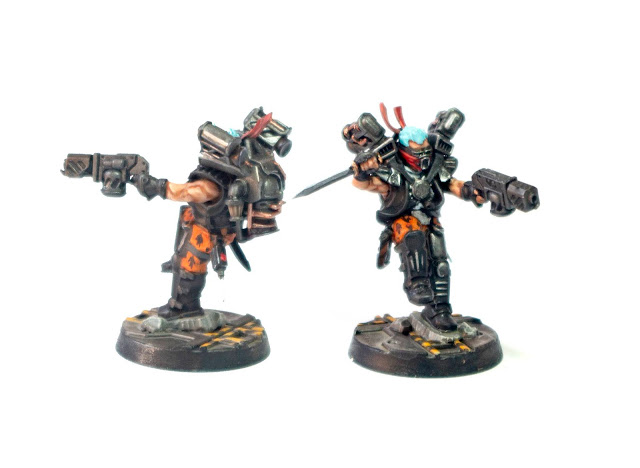 In somewhat stark contrast to his rather reserved collegue. This chap is a colour riot. Clearly sprung in the same prison break that freed Janis Dzelz and, like him, as yet unable to locate new trousers. This one is also in the raver crew that frequent the more Escher-led joints rather than the more rock/metal vibe of the rest of the gang. Hence the extremely blue hair. 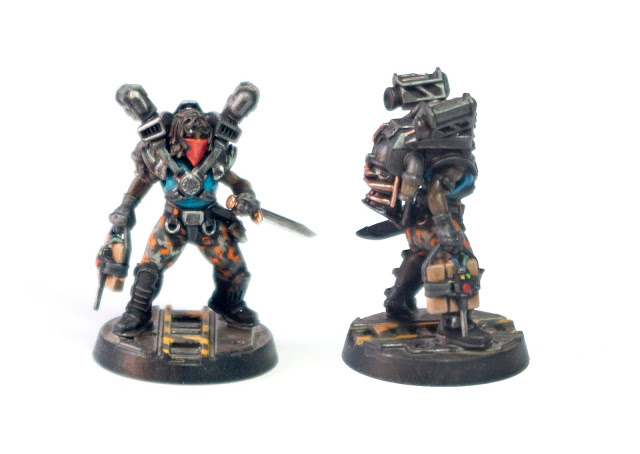 Finally! We come to a woman in the Blood & Chrome! Rest assured she won't be the last, Forgeworld have a trio of wonderful models that I intend to add (as yes, 39 was not enough) which will boost the gender balance a tiny bit. I didn't have much of an idea what to do with her at first, for some reason she's not wearing the normal leather jacket so some sort of top needed to happen but what would her vibe be? Suddenly I remembered those Ali-G-esque "urban camo" raver pants from a while back and felt that would be perfect for a maniac who flies through the air with a bomb. 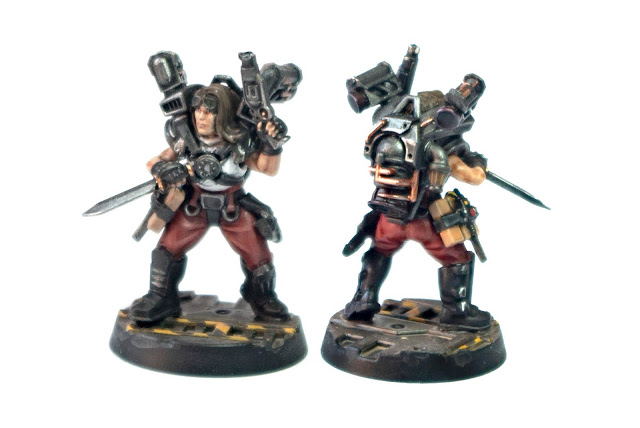 And we close out with her slightly more restrained collegue. Before I go, I'll mention the jump packs. They are works of art. I love the bodged together vibe and emphasised it by painting the piping copper as though it had literally been made from plumbing supplies. I also heat stained the exhaust vent with inks but this hasn't picked up too well either.

So that's yer lot! The Blood & Chrome have more rounds in their almost-too-capacious magazine and I'm still having fun painting them. Definately want to paint a different gang soon. Might well be some Enforcers for those scenario based head-breaking giggles. Until then, lovely people.