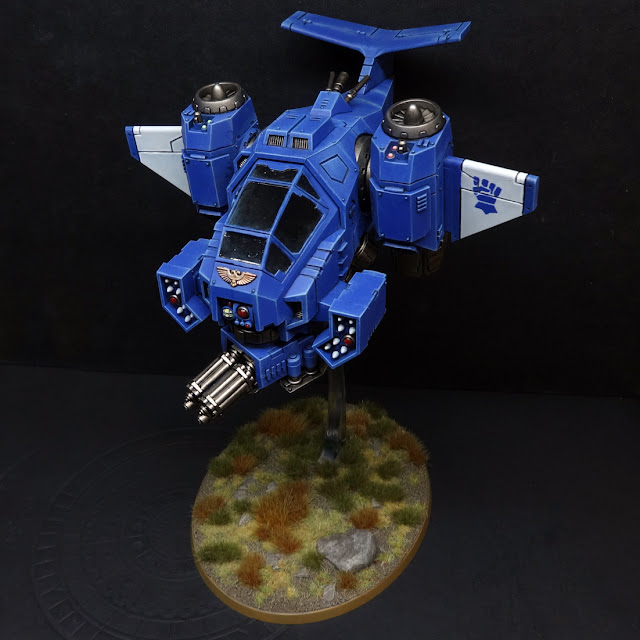 Hopefully regular readers will have forgotten how, two months ago, I said I was done with my Cobalt Scions army. Nine years of blogging should've taught me to avoid declarative statements.
That's not the only U-turn either. I also said "primaris units only!" and the Stormtalon, famously, is not one of Cawl's brainchildren (it'd need at least three more guns strapped to it). The thing is I wanted fast firepower, but there's so much detail on the Storm Speeder, and so little choice about which weapons you can slap on it, that I plumped for this overweight mosquito instead. It's faster, it's got the guns I want, and doesn't require a bajillion subassemblies.
Whilst we're in realtalk mode, I should shamefully confess that this thing is here because I'm otherwise incapable of dealing with Drew's flying farseer, who doesn't need to see me to nuke space marines and can't stop windmill slamming the fire & fade stratagem button. And who could blame him when I get so excited about covering the board with terrain? It's a powerful move. But there's only so many times I can lose 200+ points of dudes to a 150pt character I can't see before something has to change, and moreover, there's just no fast-moving firepower in my force. So this is much needed. How else can I ROFLSTOMP my newbie hobbyist friend? (Reader, please know that I will not in fact be trying to slap my noob up, that's not cool... I just need to shove her out of her comfort zone. With missiles.) 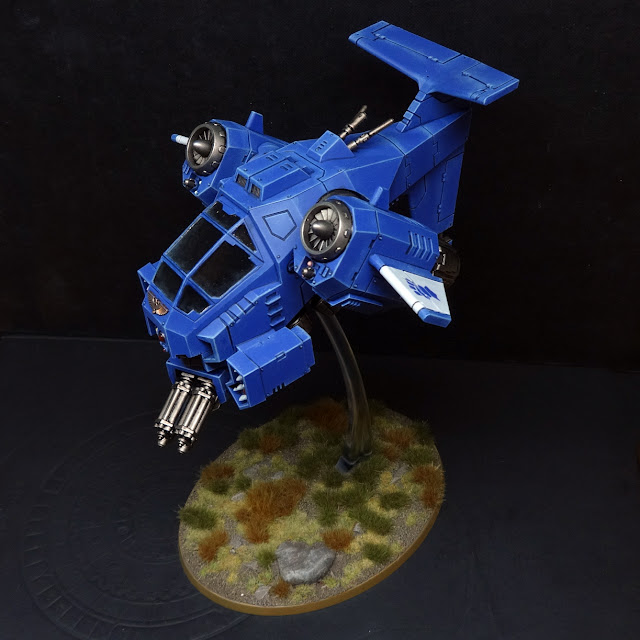 To double down on this cheap behaviour on my part, I didn't do any ambitious conversions to upgrade the dinky wee firstborn pilot... I just sprayed over the canopy to hide him from view. Also this is the first mini in the army with no edge highlighting on the blue, just drybrushing, so clearly my instinct to stop two months ago was well-founded. Still--and this is important--weeeeeeeeeeeeeee!
There are only two hobby tips to come out of this:
First, the stencil. If I could be in any way bothered with getting out the airbrush, faffing about with it, painting for three seconds, then cleaning the whole thing again, I would have done so. This tip is for those times when you can't be f---ed with that thing (which in my case is basically every time). Just use a bit of sponge. Because it's going straight down and pressing, you don't have to worry about much if any capillary action. It does a reasonable job of marking out the rough shape of your design so that you can quickly sharpen it up with a brush.
This enabled me to quickly get a consistent design on both sides of the wing without needing a special transfer. I cut the thing out of tracing paper, which is easy to cut, and easy to, well, trace designs onto. It also plays pretty well with getting wet, unlike regular paper. 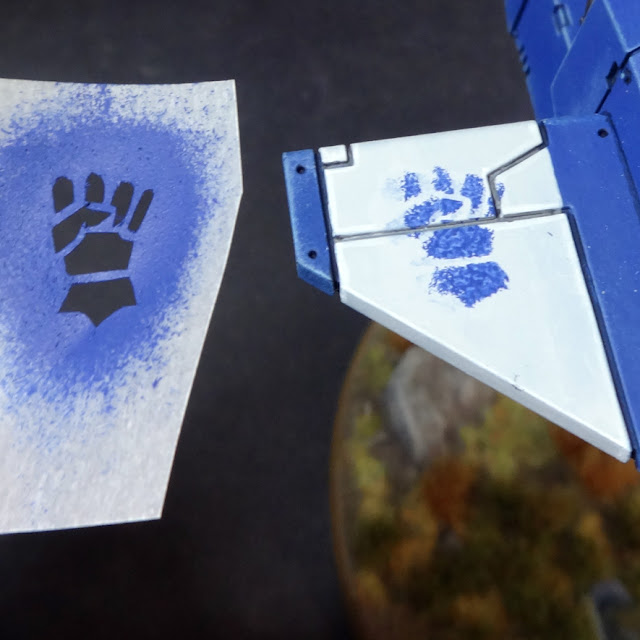 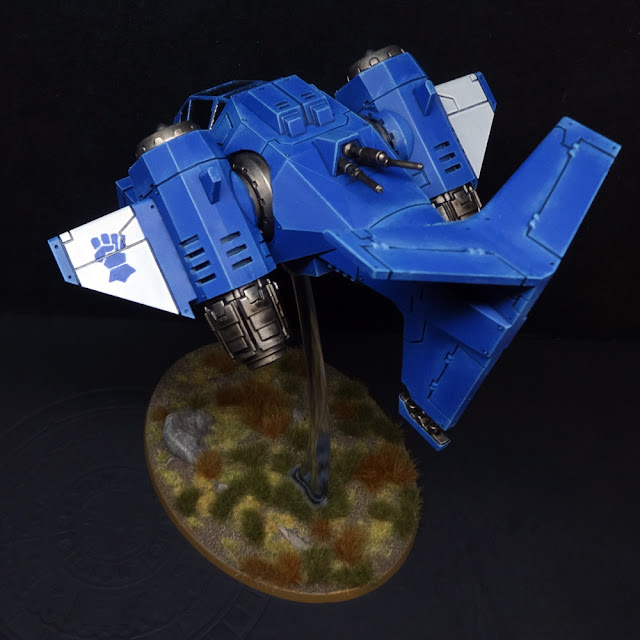 Second, greenstuff rocks. Why would you make them when there are real rocks? Because real rocks, if they're big, are more able to break free of the glue holding them on a base. Perfectly valid material to use, I'm not knocking it, but a green stuff rock is never coming off and will be perfectly flush with the surface it's sticking to - unlike a rock! Just stick a big ol' blob down, wet your knuckle, rub it over the surface until you've gotten rid of any fingerprints, shape it a little using sculpting tools, and then get a real rock - also wet and/or oiled - and just gently press it into the surface enough to create texture. Very quick, very easy. 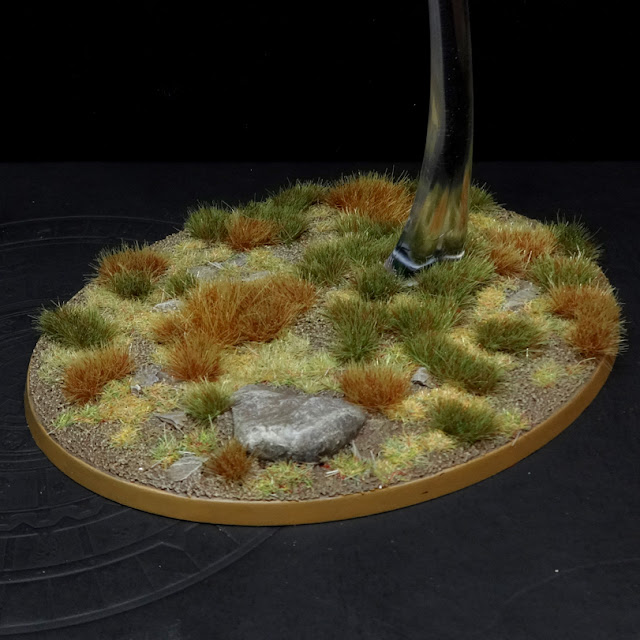 As an aside, I also used green stuff to smooth out the transition from the flying stand to the base (otherwise it's got a fat lip). Once all the grass and everything was down you can barely even see there's a slope, and I really like how the new stand compares to the previous cruciform design GW were using.
So how'd its first game go? (warning: contains humble pie)
Great, thanks for asking. I deployed in the traditional Ultrasmurf battlepile, had a great turn in which the RepEx one-shotted her wraithlord. In her second turn she (wisely) focussed fire on the RepEx, and it promptly blew up. That, it turns out, was just one of the improbably long series of 5s and 6s I rolled, leaving most of my army dead or near-dead from the tank's explosion. We called the game at the top of my second turn, as out of 1500 points I had... six marines on the table, with the gunship and another squad of intercessors in reserve. I'm so used to vehicles not exploding that I just hadn't bothered to even think about it. This is probably a lesson other people didn't have to learn the hard way. I thought it was hilarious, even more so because Drew couldn't stop apologising. Shiny new model syndrome hit so hard that the new gunship never even made it to the table.
Right, better get back to the city terrain before that upgraded Cadian box comes out and/or I finally succumb to the urge to paint Sisters of Battle...