Almost exactly a year ago I finished up my mini Tau force, you can see them all together here:  Operation House Party.  I haven't done anything with them but about a week ago there was a chat amongst our local Nerd Herd (TM) about how to magnetise the weapons on Battlesuits and since I've been magnetising pretty much everything for as long as I've been hobbying we thought it would make a useful post here. This post assumes you have a drill/pin vice suitable for the task, and are familiar with its use. 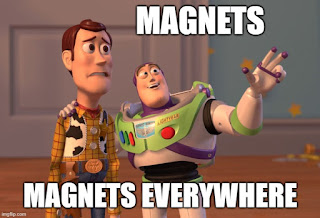 Before I get onto the specifics of Battlesuits, I thought I'd point out the most important aspect in magnetising: polarity.  Get this right and ultimately anything you magnetise will be compatible with any other item you've magnetised.  This has lead to me being extremely silly and onetime had a Terminator running around with the arms from an old box Dreadnought - definitely not narrative and sadly not recorded in an image. 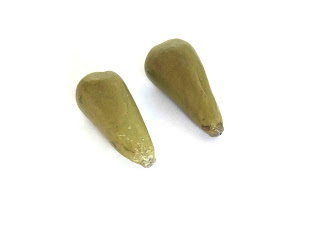 These little beauties aren't some horrifying ear-wax candle as sold on Goop, but in fact my magnet applicators.  Little dollops of Milliput and buried under years of residual superglue at the thin end are some little 2mm magnets such that they will attract each other if placed end to end. 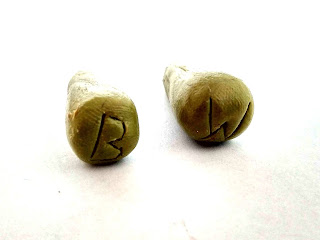 On the back here you can see I've labelled them B (body) and W (weapon).  Now that I'm no longer paid to stare wistfully into the night sky but rather terminate cancer with extreme prejudice and so spend far too long looking at medical scans, I'd use proximal and distal.   The idea is that the magnet going into the part closest to the body of the model is placed with the B applicator (proximal), and the magnet going into the part closest to a weapon is placed using the W applicator (distal).
This way, you could have a chain of items magnetised and you could add or remove items and they would always match polarity, future proofing your work.
( # the gun magnet connects to the hand magnet,
# the hand magnet connects to the arm magnet,
# the arm magnet connects to the shoulder magnet,
# dem bits, dem bit, dem magnet bits
# they're all gonna connect together )
(c)  The Delta Rythm Boys - Dry Bones

Anyway, after this ridiculously long pre-amble, on to the meat and potatoes of the post and how I magnetised my Battlesuits. 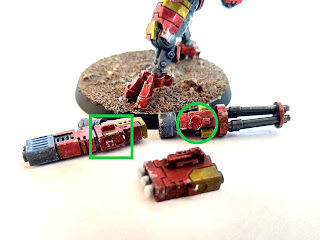 In the image above, I've tried to highlight where the magnets are placed with the green circle and square.  If you look into the green square, you can see the rectangular "peg" on the side of the weapon that fits into arm to locate it on the model.  You can also see on the top of the weapon, and in the circle on the burst cannon, that I removed half of that peg, and then drilled for a 3 mm magnet in place of that removed part of the peg.
The images below of the Battlesuit shows the corresponding points on the arms and jump pack where I have placed a magnet into half of the slot into which the peg would be inserted.  Doing it this way means that while the magnets hold the weapon attached to the arm, the original peg and slot is still locating the weapon correctly to the model and also prevents it from spinning around. 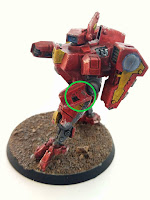 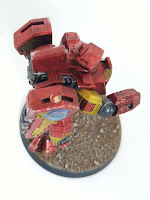 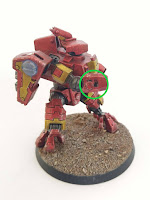 ... and finally you can see it all together 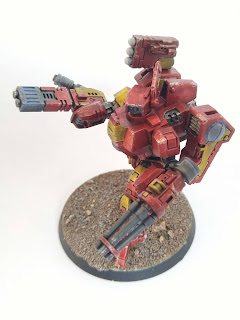 You can also apply a similar principle to Riptides as well 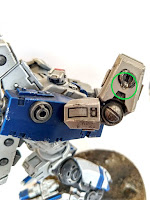 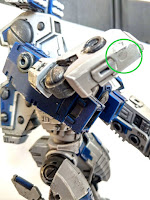 I'm sure there are ways for the other suits as well but I don't own any of them so can't really comment.
Ultimately, the things to remember are to try at all costs to keep your polarity constant throughout so that you can mix and match, and to keep as much as you can of the original locater pegs and slots so that the weapons will naturally sit where they are supposed to and are just being held in place by the magnets instead of glue.
Hopefully all that's clear, and it'll help anyone struggling with magnets to get a bit of a start.  If you've got any more tips for this, drop them in the comments below and I'm not averse to updating this post to include even more good advice.
Laters,
Andy