By Maisey September 06, 2021
In recent times two things have happened. Firstly, but chronologically second, we have gained a new codex for the Thousand Sons. The codex is actually quite good. Positives include more wounds for your Arcana Astartes and the daemon engines gaining some extra shooty points. Negatives include no actual daemons in the book and you can no longer take hordes of minions. Which to me is a downside as I liked the image of a powerful sorcerer kicking about a mass of expendable underlings towards the enemy. Also gone are the stratagems that allow you to mutate models into daemons or spawn. Do not despair, this is now part of the crusade rules. In fairness I think this is probably a good thing, partly because it probably takes longer than a single game turn to mutate, partly it is also fairer for those of us who don't have the spare models kicking about to spontaneously drop in a Daemon Prince because of a lucky roll. Other things include a whole load of new rules for Cabbalistic Rituals, Infernal Pacts, Cults, Legion Command, Crusade, and a few other things. Lots to get my head around. Which I will, one day, maybe...

Secondly and more importantly (and also technically this happened first) we've been allowed out to play again. My hobby is fuelled by direct interaction, that is to say gaming, with people, in real life. So actually getting out of the house and playing again has put a little fuel in the tank. 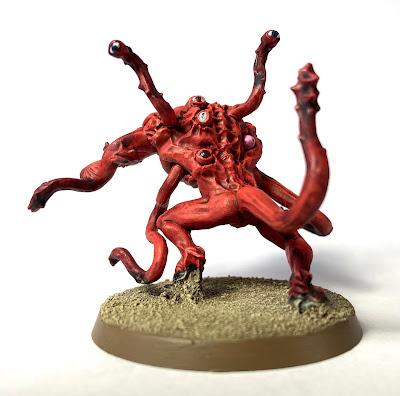 With all of this I felt that I had the juice to get on with a few of those units that I'd not got around to yet. Namely Spawn. I think having some Spawn kicking around is a fairly important part of a Thousand Sons army. Not because they'll change the course of a game for you, but because they add to the flavour. They are a warped and mangled stock cube in the stew of weirdness that is the Thousand Sons. So I grabbed a couple of boxes, giving me four beasties. These kits (I think) are relatively old now but they still stand up well. Each pack has a huge number of random components that can be used to make each spawn as different as you like. I tried to make each one feel different to each other. As I was building them they all got given really stupid little nicknames, my favourite being Not-Danny-Butterman (because he's made of eyes). 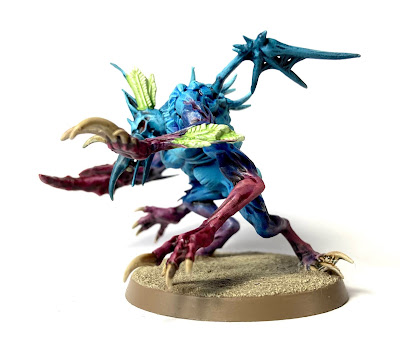 Painting is when it got really fun. Normally when painting I'm fairly careful and tidy. I only keep out the few paints that I actually need. Not this time. I basically dumped out all the washes, shades, and contrast paints that we have and just kinda went to town a bit. The United Colours of Tzeentch is the one I am most happy with in this respect. As the contrast paints take longer to dry it was fairly easy to blend and fade between the magenta, purple, and blues along the limbs.

After that each model was hit with some selected dry brushing. Since these models have such a pronounced texture it works really well to build up the layers. Little Miss Crabface's body shows this well with the change between teal to a pale bone in places. 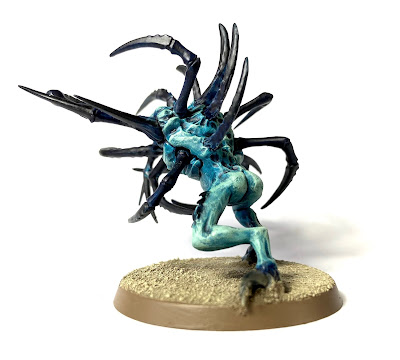 Once all that was dry it was time to pick out a few details, and in the case of Hector The No Longer Well-Endowed, I broke out the technical paints just to make his skin look extra sore and painful. I can't imagine having various spikes and blades popping out here, there, and everywhere being very comfortable.

Basing. The basing is sand, painted to look like sand. 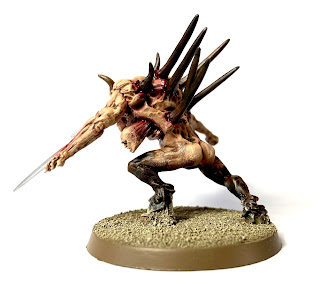 I can't decide what the next unit is going to be for the Thousand Sons. I've been putting very serious thoughts into making cultists that are more Tzeentch/Thousand Sons themed but I've been struggling a little with how to actually do that. I've also been eying up a Daemon Prince for when Rah'zuul finally manages to get enough loyalty points on his Tzeentch membership card and ascends into daemonhood. Or it might be a funking huge daemon engine, with wings! Only Tzeentch knows.