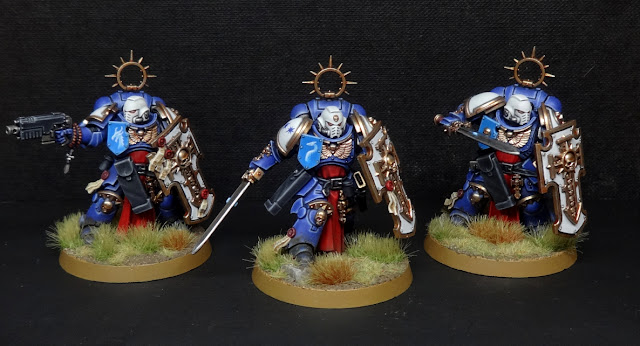 Bladeguard Veterans have a very particular aesthetic, and that aesthetic looks a whole lot more medieval than the rest of my Cobalt Scions force. This led me to have a bit of a think about how they fit in. Regular readers will already have learned that when I say "a bit of a think" this generally means "Charlie's written a load of new lore." Today, then, I offer you three things:

A prosperous world of significant agricultural and mineral output, Nova Tarentis was crucial to trade within its area of the Segmentum Pacificus, and an obvious target for the archenemy. Traitor Guard and Dark Mechanicum forces attacked in strength, and pleas for aid were made. Keen to end the invasion quickly, the full Azure Drakes chapter responded, along with four companies of Cobalt Scions in support. The Drakes' Chapter Master Sorkhos Danithor committed to a full orbital assault, giving the enemy on the ground little time to react.
Once the bulk of the Drakes and Scions had launched from their vessels, however, drive cores began to kindle all around Nova Tarentis' planetary rings. A substantial force of Black Legionnaires, thousands strong, had laid the perfect trap. Extracting the deployed troops would take hours, so Danithor - now trapped on the surface with the rest of his chapter - ordered the fleet to break orbit and seek reinforcements. The one-sided fleet engagement was a sign of things to come. The Imperial fleet suffered catastrophic losses as it sped for the Mandeville Point.
With their fleet gone, the loyal Astartes fought on as the traitors made planetfall. The fighting was brutal, but ultimately the Drakes and Scions were in an impossible position, hunted by a superior foe and lacking crucial supplies thanks to the loss of their orbital support.
Danithor orchestrated several breakout attempts, reasoning that asymmetric guerrilla warfare might allow more of his forces to survive until reinforcements arrived, but the Black Legion's noose proved too tight. Slowly, the Astartes army lost ground. When the battered Azure Drakes fleet returned with reinforcements, the few remaining marines were already making their last stand.
As soon as the heretics' scout vessels spotted the incoming Imperial fleet in the system's outer reaches, the Black Legion began evacuating, their mission a total success. They had slain over a thousand loyalist marines, and had taken favourable casualties.
The final blow was, perhaps, the bitterest. During the enemy's final assault, Danithor noted enemy bombardments on the Imperial formations either side of his position, but none on his own. When enemy veterans in terminator plate teleported down behind him, preventing retreat, he realised all too late that they intended to take him alive. In his last recorded communication, he passed command to the most senior Imperial commander left - a Cobalt Scions reserve sergeant - before taking his own life. Frustrated, the Black Legion veterans butchered his retinue, but left empty handed. It mattered not; the Azure Drakes were gone in all but name.
Aftermath
Being of the same geneseed, it was agreed that the few surviving Drakes would be folded into the Cobalt Scions. Some were unhappy to muddy the chapter's culture with the more bellicose Drakes, but none would have seen the survivors cast adrift. The legacy of the Drakes would live on as one of a number of fraternities that a Cobalt Scion might choose to join during their life in the Chapter. Likewise, their few remaining fleet assets, including the crippled battle barge Tarasc, would be used to replenish the Scions' naval losses.
With the Scions themselves now dangerously under strength, they were dismissed from the Indomitus Crusade and told to set off for their new home world of Thonis.
During the voyage, as the Tarasc limped along with the rest of the fleet, its engineers created a hall of remembrance, bearing the tattered banners and engraved names of all the fallen Drakes. Above the entrance is a plaque bearing the words In Memory of Those I Hoped To Save.
Formation of the Cobalt Scions’ Bladeguard
Brother Azarias was one of the few Azure Drakes veterans to survive the Nova Tarentis Massacre. Following the incorporation of the surviving Drakes into the Cobalt Scions, Azarias took an oath to protect his new chapter master with his life. Coming from a very different chapter culture, he refused to conduct himself in the refined style of the Scions, often mocking others and then challenging them when they failed to mock him back. Amused by this upstart and keen to temper the egos of his senior staff, Chapter Master Drusus instructed Azarias to create his own semi-autonomous brotherhood. Azarias himself was slain protecting Drusus two years later during the reclamation of Raxis Minor, and the Bladeguard - then numbering only seven warriors - was officially renamed the Azarian Guard in his honour, although the term Bladeguard is also still used as well.
While this brotherhood exists outside the company structure, their numbers (a maximum of thirty) count against the tally of the First Company. They do not have squads, and bear heraldry of the individual rather than the unit. To join them is to foresake the right to seek a command position within the chapter, and to become truly dedicated to pursuing martial prowess. Answerable only to the Chapter Master and the Reclusiam's Master of Sanctity, they have permission to mock officers, and cannot be censured by any but the Chapter Master or Master of Sanctity for doing so. If they decide to follow an officer to war, however, they must still follow the officer's commands precisely during engagements. If a commander wants the aid of the Azarian Guard on a mission, he cannot requisition them; instead, he must petition them. Likewise, Azarian Guards are permitted to turn up unannounced and accompany a strike force if they deem the mission interesting. When not accompanying a strike force or directly protecting the Chapter Master, Azarian Guards are known to undertake quests of their own volition, seeking out worthy foes and providing unexpected aid.

Heraldry of the Azarian Guard

Brother Priahad
Brother Priahad's helm bears a gold skull, indicating that he is serving as the temporary leader of his fellow Bladeguard. In this way, Cobalt Scions officers know who to direct their commands to. The skull itself is not a permanent fixture but a badge that can be easily removed and passed to another bladeguard between engagements.
His left pauldron bears the chapter icon. It is presented in gold so as to evoke a shield, representing the bladeguard's commitment to safeguarding the Chapter Master.

His right pauldron bears his individual heraldry, evoking a deed or quest he has undertaken that his fellow veterans regard as worthy. It shows the four stars of Thonicia, in reference to the vow Priahad enacted to visit every inhabited world in the sprawling home system and provide unexpected aid to those in need.
The tilting plate on his chest bears the ghostly image of a wyrm, and the chapter colour of the Azure Drakes, indicating that he is one of the original members of the now-defunct chapter. The wyrm is presented in a ghostly manner to reference the lingering spirits of his dead brothers.
Brother Katumaros
The golden skull on Katumaros' tilting plate indicates that he was once an officer. Counter-intuitively, he wears this as a mark of shame; as the fleet master who couldn't bring reinforcements to rescue his brothers in time, he is wracked by guilt and joined the Azarian Guard to ensure he could never rise to a position of command again. Despite a storied career prior to the Nova Tarentis Massacre, he considers his old achievements dead, and as such, his right pauldron remains devoid of heraldry.
Brother Galadoc
A mere brother in the Azure Drakes' 8th reserve company when his Chapter was destroyed, Galadoc has only recently joined the Azarian Guard. Like Priahad, his tilting plate features a ghostly image, this time of a dragon's head, commemorating his deceased captain, who he revered. As a new member of the bladeguard, Galadoc has yet to earn personal heraldry for his right pauldron.
On his arm, he also bears a rosary once carried by one of the Drakes' chaplains. Galadoc's keen observance of the rites and rituals of his old chapter cult was one of the factors in his acceptance into the Azarian Guard, even though in theory martial prowess should be the only factor.

It feels insufferably pretentious to think of this last bit as designer's notes, but I can't think of a better phrase, so pbbbt.
The main benefit of leaving two pauldrons blank is that when I eventually get to play a 40K Crusade, I can wait and see what the unit do in-game, and add to their heraldry accordingly. The trick will be to wait for something particularly cool, rather than simply slapping something on there the first time they kill a gretchin.
I should also add that the Nova Tarentis massacre, and the Azure Drakes as a whole, were not written purely so that I could have these minis. The chapter was already in the mix by the time I did Lieutenant Nerva back in April. They were originally added to evoke the way the Roman Empire absorbed other cultures. I wanted that melting pot feel; they've got their original chapter, the chapter they absorbed, and then the various cultures of the worlds of Thonicia feeding into it, leaving space for a lot of cultural variety. With the Bladeguard in particular it makes me think of the way Romans used 'barbarian' troops (e.g. cavalry from Germanian tribes) as auxiliaries. Actually the best comparison is the Varangian Guard, a group of Norse and Anglo-Saxon warriors who served as the bodyguards of the Byzantine Emperors.
In the fullness of time I'd like to convert a squad of true 1st Company veterans kitted out like Bladeguard but looking much more like the rest of the army, so you can see the two cultures side by side.
Hopefully this lore has been edifying; I've certainly enjoyed finding new narrative depths to plumb as this army's expanded. Next time on Charlie Paints Blue Dudes, I'll return with more lessons I've learned on the painting side of things.