By Charlie September 27, 2021
In over 20 years of painting miniatures, I've only just realised this Cobalt Scions army is the first time I've ever painted an army in which every model is fully edge highlighted. Plenty of characters and warbands got highlights over the years, but mostly I've used faster methods for the bulk of an army. Drybrushing, dirt washes, that sort of thing. Doing highlights across the whole army has revealed that I'd never really refined my highlighting method. I hadn't needed to, just doing one character here and there. Two and a half thousand points into the project, I've unsurprisingly learned quite a bit, and over the course of the project I've more or less halved the time it takes me to paint these guys.
Today then I'm going to provide some updates to the (still mostly true) guide to highlighting blue power armour I wrote in June 2020.
I figured this stuff out while preparing for a game against Tom and Andy's combined Necrons (an educational thrashing, by the way). I had a few weeks in which to paint 3 bladeguard, a tank butt, and 5 intercessors. On paper I was doomed, and yet to the bafflement of everyone familiar with my usual painting speed, these lads happened: 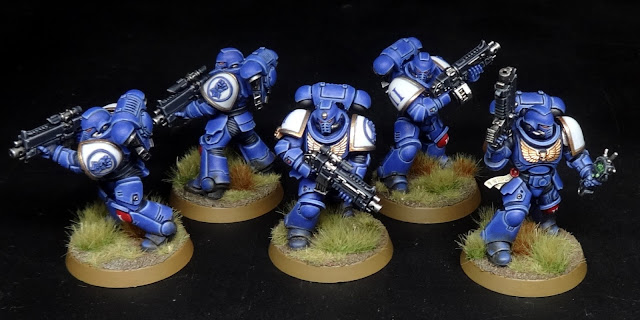 OK so technically I didn't have the squad numerals painted in time for the game, but they were still presentable, and done in 4-5 hours per dude (as opposed to the 8ish hours per marine I took for the first squad).

So, how did I accomplish this astonishing vaguely impressive [by my standards] feat? Well, when executing detailed paint schemes like this, there's an instinct to do one colour to completion, then work on the next thing. Conversely when you're batch painting, the rule is to do your paint stages in decreasing order of messiness. Here, then, is the refined order of business:
1. The Priming
Spray Chaos Black, then somewhat zenithally spray Macragge Blue.
2. The Sloppy Giuseppaint
Right out of the gate, this is where I saved entire hours of my life by applying the world's sloppiest, mostly overbrushed highlight of Calgar Blue on the armour. If it looks good, you're doing it wrong. You don't have to worry about the paint going everywhere, because literally every part of this model is about to get painted with another colour.
I did several thinned layers, treating it as half-zenithal overbrushing and half-edge highlights. But, like, bad edge highlights. Thick ones. Done with a brush deliberately too big to allow for precision, forcing me to relax and speed up rather than getting sucked into the details.
3. Faster blocking in
Citadel Contrast Black Templar was applied to rubberised seals, pouches, belts, guns, and all metal areas. This will still look a bit blue, but is much faster and smoother to apply than a normal paint, and knocks it far enough off the blue that the subsequent colours don't need as much work to look solid.
4. Paint most of the owl
Most of this was just standard shade/highlight shenanigans over most of the colour areas of the model. The thing worth calling out is the black pouches/belts. I didn't bother putting on the normal basecoat of Corvus Black. Instead I went straight to the highlights, despite the blue-ish unfinished look created by the black Contrast paint. Once all the highlights were done, and I'd lined in the recesses with more Black Templar, only then did I cut in with Corvus, effectively combining the tidy up stage with the basecoating stage. Significantly quicker, and visually indistinguishable from my other dudes.
In this phase, I painted everything except light sources (eyes, glowy buttons etc), and then...
5. Go back to highlighting the blue
The models at this point looked pretty hilarious, like a functioning adult painted all the details, but their toddler did the blue armour. It was time to fix that. I did the much more sharp Fenrisian Grey highlight like normal, then used Reaper's Blue Liner on the recesses (which meant I could correct any points where I'd messed up with the Fenrisian Grey). Only now did I actually open a pot of Macragge Blue, water some down, and apply a semi-translucent basecoat. This tidied up the messy (but quick) first highlight stage done way back at the start, while also getting the main colour down on the miniature.
6. Basing, and the lap of victory
Yep, time for sand and grass and the final satisfaction of painting the base rims.
TLDR, please?
All in all the main thing that saved time was doing the highlights ass-backwards, that is to say:
This probably saved me about an hour per dude. I should time it at some point, because it might not be a whole hour I shaved off, but they definitely came together faster and more smoothly. You just have to be willing to let the model look like ass for a while and trust the process.

Following on from my post on adding variety to Intercessors, I added a couple of specialists to the unit as suggested by regular reader RSF_Angel. First was a marksman wielding a stalker bolt rifle with marksman's honours on his pauldron, and second was a combat squad leader designated by a skull on his helmet and right pauldron trim. To balance out the single shot stalker bolter I also chucked in an auto bolter (not that anyone would care) and just hand-wave the whole squad as bolt rifle dudes.
It would've been cool to paint the dude with the auspex as a Helix Adept, but I ran out of time. Maybe I'll promote him with some extra painting if the squad get sufficiently experienced in a Crusade.

Yeah I'm amazed my attention span has somehow lasted this far. I think it helped that I had a brief break from them, and it really helped that we're playing games again. I'm just having a lot of fun, even when I lose. Which I most certainly do. Here's the whole army so far: 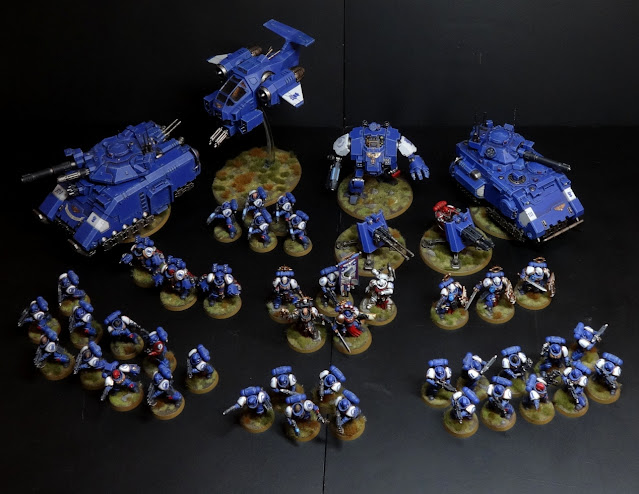 I say 'so far' because, while I'm now going to paint a few single minis for some roleplay scenarios, I think I'd like to have a crack at doing a wee Phobos armoured detachment next. After that, who knows? Not me. Being constrained by a strict plan is oppressive, particularly now that the army's functional. I can just add in whatever interests me that month.