Welcome to our (sort of) annual end of year wrap up. We'll take a look back at the previous year and then lay out our hobby plans for 2022. This time we'll be doing things a little differently as we have opened our digital doors to our ever growing hobby group. We've ask them for their view on 2021 and what schemes are being hatched, plots being thickened, and what unfoilable plans are being planned. 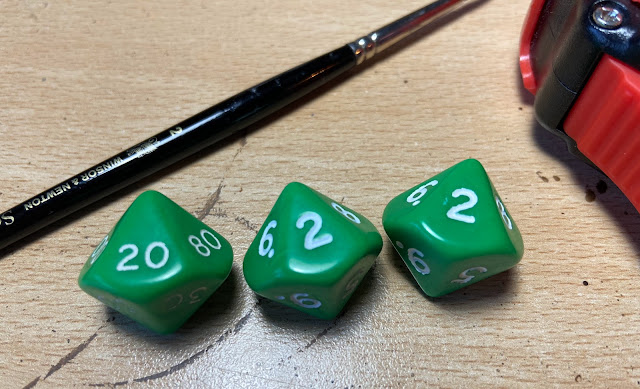 Now moving on to 2022, in the order that I received the responses:

"For 2022 I'm focusing on re-painting and completing older armies from my hobby history. I made a start on this last year with my Bretonnians and found it immensely satisfying to complete half-finished-then-forgotten units, to work in some of the techniques I've learned more recently, and to (try to) improve paint jobs where possible. Targets for the year are: some Imperial Guard, Man O War fleets, a few units of Dwarfs, some Blood Bowl, and some 1/1800 warships" 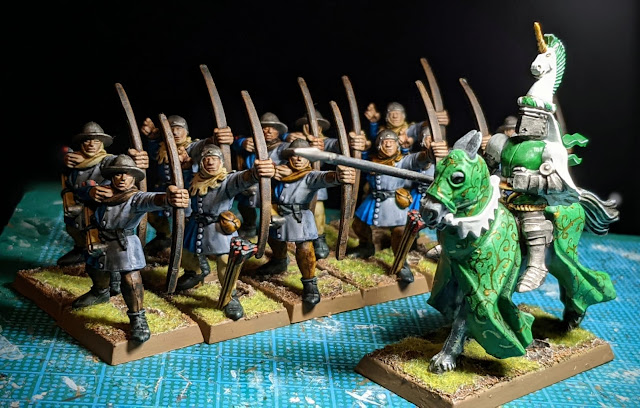 "Oh, and some Bolt Action."

"So this year I really want to get my first proper imperium army done with good enough lore invested into them, this will be done with my Disciples of Caliban! I would also like to get my 2000pts of Krule Boiz painted to hit the tournament scene! (I'm about a 3rd of the way there)" 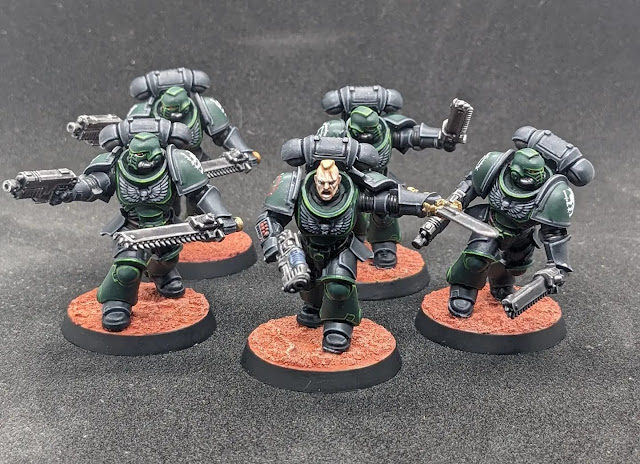 "My New Year New Army is going to be those hyper-evil murder-pixies: the Drukhari. As you can see from the pic below I have already started, buah ha ha haaaaa. I will also be making serious terrain efforts this year; been neglecting the third part of the battle for far too long." 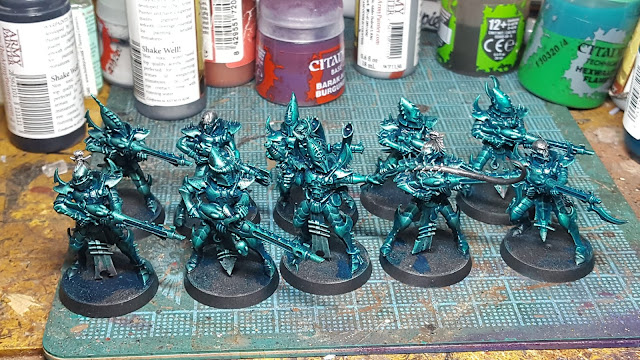 "There's 3 2's in 2022, and I've got 3 aims for 2022.  First is to continue to get rid of the pile of shame, I made inroads in 2021 but there's still far too much weighing me down.  Second is going to be a further push for hobby and I've got a vague idea in my head for a textured battle mat that may make an appearance.  Thirdly, it's the new year, new army.  Probably Space Marines, the Void Reivers will finally see some paint, but we'll see..."

"Where 2020 was a lonely year of making three new armies but not getting a chance to use them, 2021 had two main themes for me.  Firstly, Crusade.  I started playing Crusade 1 on 1 with Andy, my Raven Guard versus his Necrons, and towards the end of the year my Orks got quite heavily involved with Charlie’s Scions, and a little bit with Drew’s Eldar and Jeff’s Genestealer Cult.  A lot of my model purchases and painting therefore has been concentrated on getting those armies ready for 9th/Crusade and then expanding them as the Crusades went on.  The other half of my effort was to bootstrap myself from nothing to single-handedly comfortably filling a 6x4 table in painted terrain.

Unlike many of the Nerd Herd, I am not planning to do “new year new army”.  I currently have 6 painted armies souped from 9 factions and the only super faction I don’t currently have is Aeldari, something I’m keen to maintain until/unless Exodites riding freaking dinosaurs break my will utterly.  Instead my focus is to buy as little as possible (there are a few Ork units I’m still keen to add) and work on reducing my pile of shame.  Key milestones will include the Imperial Knight I got for my Birthday that is still half on sprue, the (40k scale) Thunderbolt fighter I got free several years ago in all it’s intimidating resin-iness and finally knocking out the last 29 Gaunts of the Tyranid army I bought in 1st lockdown about a million years ago." 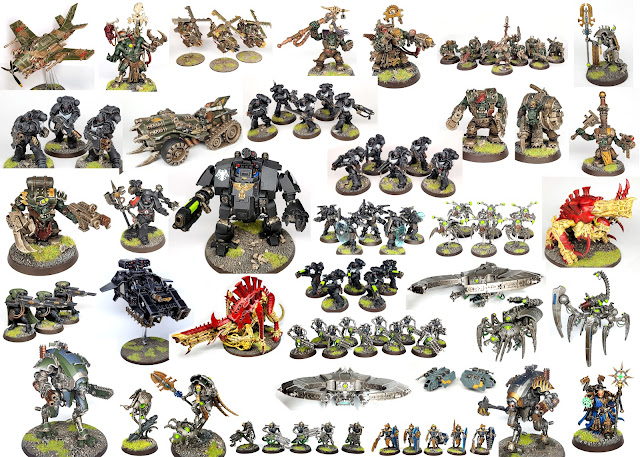 “After becoming the proud owner of my very own gaming mat over the Christmas season, I decided the obvious choice for a 2022 project was terrain to fill it. My first buy was one of the Battlefield Expansion terrain sets so my beloved Craftworld Eldar have some narratively ubiquitous Ad Mech ruins to shenanigan in. I’ve seen the same range used by a few other beard bunker members and with all the texture built into the pieces it seemed like a good choice for a first attempt at scenery. If all goes well I plan to move on to some of the smoother, less forgiving aeldari themed buildings/ruins, along with some trees, rocks and bits of scatter terrain. I’ve yet to paint anything particularly big, or do any kind of weathering, so I’m looking forward to giving it a punt!

The other half of the plan is to get through my current Eldar back catalogue so I can make room for all the sexy new models heading our way! (How many space pixies is too many?)” 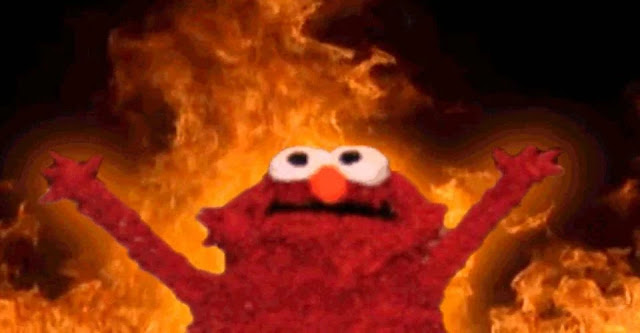 "2022 is going to be the year of the Cog. I'm diving into the 'New Year, New Army' thing with gusto. I've grabbed a couple of boxed sets and have made a start (shush, I know it was early but... I wanted to start, so there). I'm also planning in my head to make up some objective markers and some Admech specific scenery. I know we, as a collective group, have Mechanicus scenery in abundance but I'm going to make a few specific scatter peices that can be used as objectives depending on the game. Oh, and this is going to be my main crusade force as well so I've had the joy of creating two spreadsheets instead of one. As a break from the Admech I'm going to be continuing my small scale Napoloenics adventures. I'm only about 2/3's of the way through the French and I've still got the same again in British forces as well as scenery. This is all masssively depending on the butterfly staying on course but we'll see how far I get with it all." 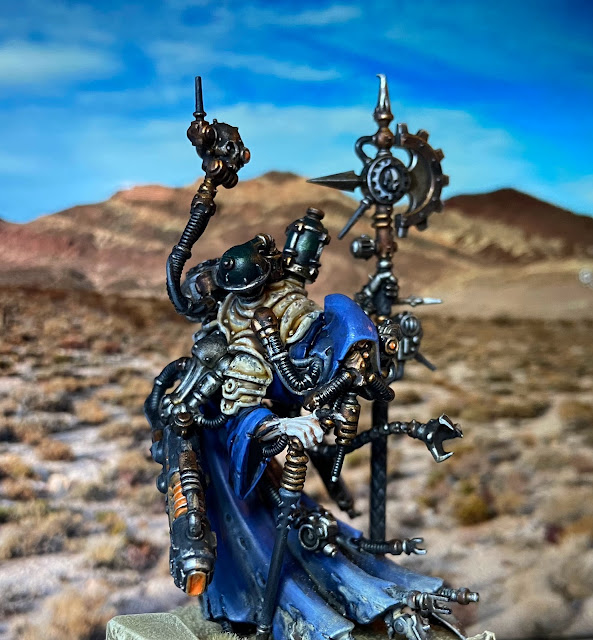 "This year I aim to work on a small harlequin support faction, the start of which was kindly given to me by my friend Jed. The models are very enjoyable to paint and a nice silly break as just anything goes.
With these also goes the expansion of my Aeldari to field them together.
In terms of a very 'on brand' insanity project, I will aim to get my hammerhead bunker  linked up with a Raspberry Pi... with the blessings of the Omnissiah we might just about have a chance." 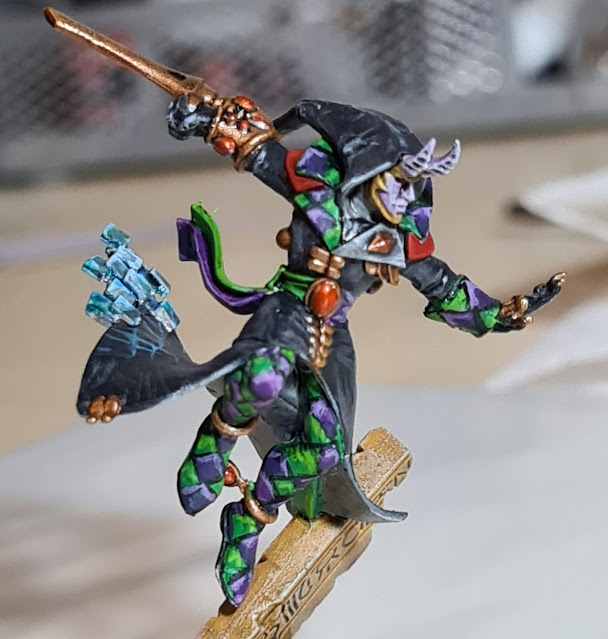 "In 2022, the game has a name, and the name is MOAR BEIGE. The paving tiles (plus, I suppose, the buildings to go on them) are slowly bipping their way up the table like a .jpg from the 90s' internet. Will I ever flirt with non-beige tiles? Will I chunk through the absolute stockpile of terrain waiting for me in the box room? Will it result in completing the modular urban board project? The future knows, and the future ain't telling.

"Naturally I also intend slap some paint on wee men. I haven't started a new army in a good while, so Maisey's suggestion of New Year, New Delicious Temptation will be met with Goffs. Not the traditional pile of boys, though, because that would be oppressive to play with and against. They'll be a varied bunch, with a despair-avoidingly low model count and a slappy slappy paint job. In between orkoid spasms I'll carry on with the occasional unit for the Cobalt Scions; in the short term that means more Phobos lads like the test bloke below." 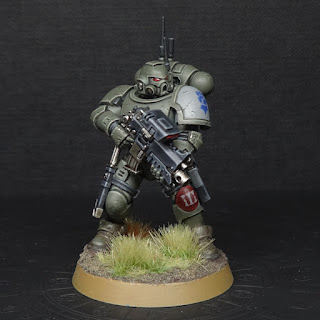 "This year I will finally launch my Adeptus Sororitas on a crusade against the other players in the beardbunker. They were painted last year during the various lockdowns, and it seems fitting to finally put them on the table. Over the course of the crusade, I will most likely discover that I have the complete wrong composition of units, so I bet I will have to paint more of those. Furthermore, I am also planning on building/painting an ork themed gaming board, which should function for both normal 40k and kill team.  Since I bought two of the Killteam Octarious sets for the terrain, there is a high risk of me picking up either Orks or Death Korps later in the year, since I already have a reasonable sized force of both."

That, Ladies and Gentlehams, is the hopes and hobby dreams of our nerd herd. Hopefully it'll provide a little inspiration to paint, the motivation a arrange a game, or the impetus to clear your pile of shame.  We'd love to hear your own 2022 plans in the comments below, and if there's any particular projects mentioned above that you'd like to hear about as they happen, that's useful feedback for us too!