The Year of the Cog: Part One - Troops

Hopefully by now you have all read the Bunker’s plans for 2022 by now. If you haven’t, off you pop, have a read, then come back. 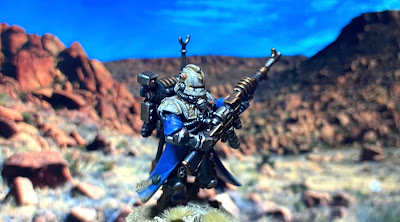 At some point late last year someone suggested that we as a group do the whole ‘New Year, New Army’ thing with a focus on creating crusade forces that we can play with and build up over the year. As with anything we do it was met with various degrees of enthusiasm. Ranging from Jeff and I doing serious damage to our wallets through to a few people saying that they are just going to finish up what they have already got ongoing. All reactions are perfectly valid and welcome. We are all just happy to be hobbying as a group, no matter what we are doing. 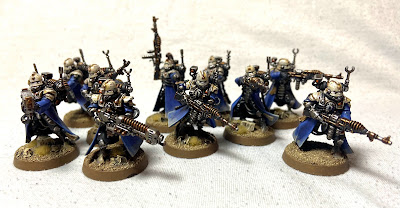 In my excitement I went and ordered several boxes of Adeptus Mechanicus stuff. The Christmas battle force and the combat patrol to be specific. Along with the codex I also grabbed the Techpriest Dominus from my local store so I could get on with something whilst the iron was hot. Turns out those two sets gave me a rather neat 1k force to be getting on with. So that was pleasingly Admech.

So why Admech? Well, I normally over think everything. Including such things as ‘how many other people are playing this faction’, to ‘what colour scheme I fancied doing’, all the way around to what balance of Imperial/Xenos/Choas forces I already have. So this time I decided to go with my gut instinct and see what happened. So I cleared my head of my normal ramblings and went with what felt right. Turns out my guts don’t have shit for brains after all. 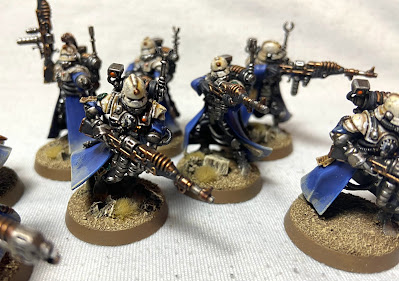 Once I had thought it out it actually all made sense. Admech have a good range of new models, aside from the servitors (which we can all ignore) all of the models are really very nice. Each unit has a distinct aesthetic and play style (no endlessly edge highlighting yet more identical power armoured dudes). There is a mix of fabric, armour, fleshy bits, and weird mechanical gubbins which is giving me a wide range of painting styles to play with. It also ticked the Maisey requirement of having a few megalomaniac leaders with weird names and a lot of expendable minions to throw about callously. 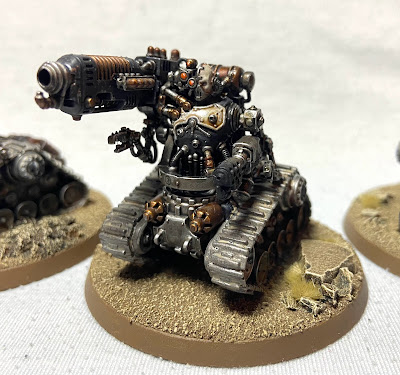 As is the natural order of things I started with painting a character, because I was excited and I had that model in my hands. The Techpriest Dominus got done whilst I was waiting for the rest of the order to arrive. This laid down the pattern for painting the rest of the army. Today I'm showing off the first couple of troops units, a squad of Skitarii Vanguard and a trio of Kataphron Destoryers. 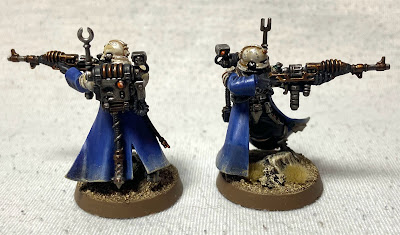 All of the coats and robes are going to be a lovely mid-blue. The blue was a solid basecoat of Macragge Blue, a wash of thinned Drakenhof Nightshade, then built backup with Macragge Blue, Altdorf Guard Blue, and finally highlighted with Calgar Blue.

Armour plating is a contrasting bone white. This was created by applying a solid basecoat of Wraithbone. The washed with Agrax Earthshade. Then built backup with Wraithbone again. I then used White Scar to do a mix of a highlight/chipping stage. Then the deepest of chips was then filled in with Leadbletcher. To finish off I then applied the secret ingredient. Vallejo Engine Fuel Stains. This is a yellowy/brown/glossy wash that is very transparant but gives a the perfect stained/discoloured feel to the armour. 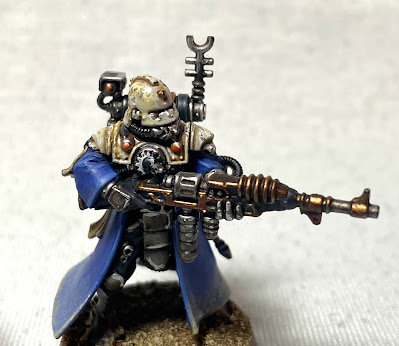 The metal work starts with a basecoat of Leadbletcher. The copper/brassy bits then get a layer of Gore-Grunta Fur contrast paint. Yup, it is transparent enough to let the metallic sheen come through and is far easier to work with than trying to put another metallic paint over the Leadbletcher. Then all the metal areas are hit with a heavy wash of Agrax Earthshade and, once dry, a recess shade of Nuln Oil. Highlighting is Vallejo Model Air Silver RLM01 for the silver bits and Fulgurite Copper for the copper bits. 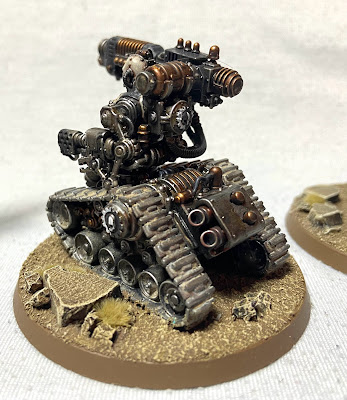 Weapons casings are Corvus Black, Eshin Grey, Dawnstone as well as some of the pipework. The rest of the pipes where hit with Contrast Black Templar. Screens and things where Constrast Dark Angels Green. Lens are picked out in Troll Slayer Orange and highlighted and shaded. The basing and weathering I'll cover next time. 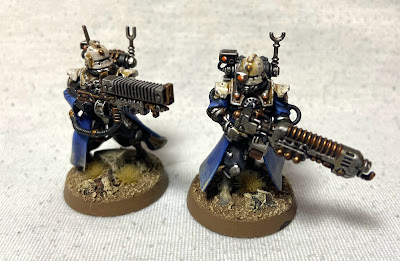 There are more troops in the works. Some more Vanguard are on the painting table as I type and some Rangers, and a unit of Breachers are on my wishlist for the future. In fact aside from the Servitor unit (which I might have to go third party for) I really want to do a basic sized unit of everything in the book. For now I have a good amount to be getting on with and Im working hard to get enough to start gaming with them soon.