Painting progress! No, not that kind of painting.

By Charlie January 17, 2022
If I haven't posted any miniatures for a while it's usually because I've entered a Photoshop fugue. For the uninitiated, that's when I get wildly overexcited about digital painting and lose all concept of time, space, priorities, and non-essential bodily functions.
It all started when Harvey and I were contemplating ways to create illustrations of the various planets in our growing 40K crusade setting. It feels cheap to just lift pictures of planets from other people, particularly when we'd have to provide immersion-breaking credit everywhere. We needed a way to quickly produce our own.
The answer came in the form of SpaceEngine, the ridiculous brainchild of Russian astronomer-programmer Vladimir Romanyuk. It uses a combination of real-world stellar objects and physics, combined with deterministic procedural generation, to create a simulation of the observable universe. Billions of stars, nebulae and planets to see and even land on. The infinity of the cosmos, represented so elegantly that it doesn't make my computer melt. It is a testament to the ingenuity of the human race that someone can take the knowledge so many people have created and synthesise it into something so awe-inspiring in its scope.
I use it to take pretty pictures to illustrate my Warhams fluff.
One could wax lyrical about the scale of the cosmos in perpetuity (ermergerd, surrr clevvah, talking about infinity indefinitely) but this is a Warhammer blog, so I will dispense with this onanistic preamble and whip out the goods.
Here's a shot taken in SpaceEngine: 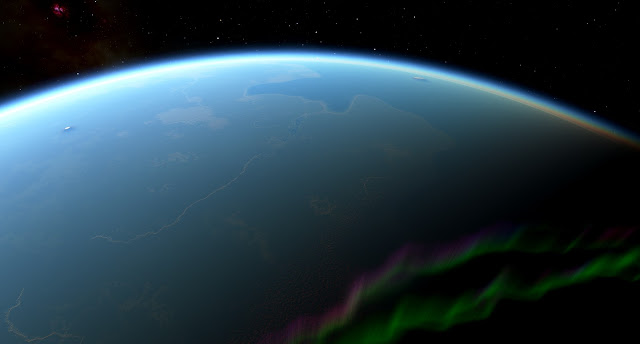 The software is designed to let you take pictures. It has very advanced camera controls for that express purpose. I took pictures of cool places I found, then added a frame I'd previously painted in Photoshop, along with various other effects to turn it into a visual aid for our campaign wiki: 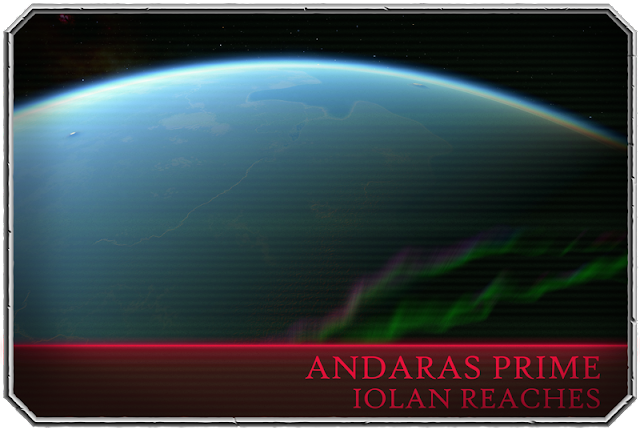 You can bookmark locations in SpaceEngine. This means that if I have an illustration that I've said is Andaras Prime or whatever, I can go back to that planet in the game and get consistent topography; take pictures from any angle to make localised campaign maps; whatever, really.
When the wiki isn't having a meltdown (we've been noticing an issue recently, and not just on our website, where the CSS fails to load, making it look like mid-90s internet even though we haven't changed any of the CSS properties, and it goes back to working 5 minutes later with no input from us... lol wut?), the page for Andaras looks like this: 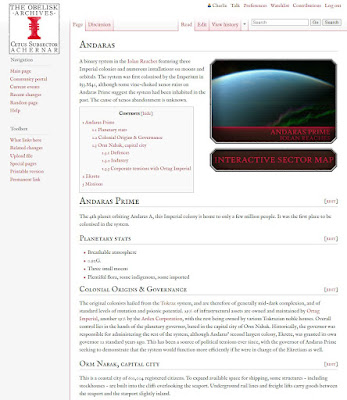 With my pretty frame set, and my explorer hat on, I buggered off into the universe and started magpie-hoarding planets that suited various locations. At this point the main time sink is exploring the universe checking stuff out, and frankly, that's a perfectly chill way to spend time.
Here's a gallery of the locations illustrated thus far: 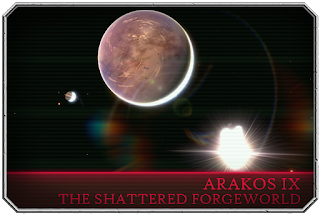 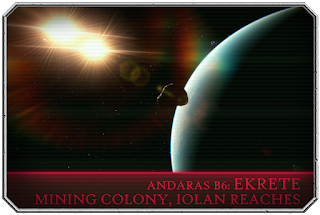 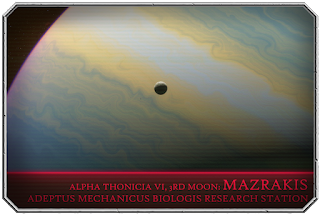 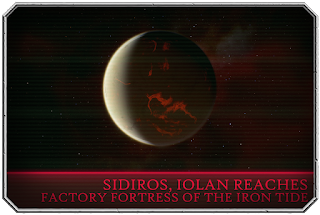 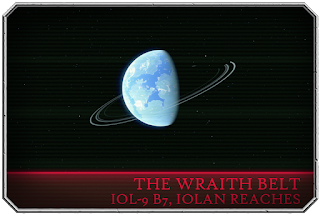 You will have correctly deduced by now that making these images wouldn't have been sufficiently challenging to initiate a full Photoshop fugue. You see, with putting all these sexy new images into the wiki, I started thinking about how we'd had to pilfer faction icons from elsewhere on the 'net. Now sure, this is all for our group's personal use, and we're getting no revenue of any kind for it, but still. We just don't even know the attribution of some of these images. We've pilfered them from other pilferers, and at this point, the best thing to do ("best" being a wildly subjective term, as you're about to see) is to gradually replace said images with ones we've made ourselves.
And by "we" I mostly mean "me," since I'm not inclined to force my obsessions on anyone else, and I really enjoy digital painting. I do sometimes wonder if I would have enjoyed a career in illustration, but that would require a level of focus unsuited to a jack-of-all-trades like yours truly. TANGENT KLAXON.
In short, I made some faction icons. Just little bits of colour to add to certain pages. Peak simplicity, and time efficiency, suggests I should have stuck to two-tone outlines. That's not quite what happened.
I took a metal ring/frame I'd painted to illustrate the wiki page for my Cobalt Scions army, then did some recolouring work to make it gold, then started thinking about shadows and weathering and colours and.... [jazz hands] ta-dahhh: 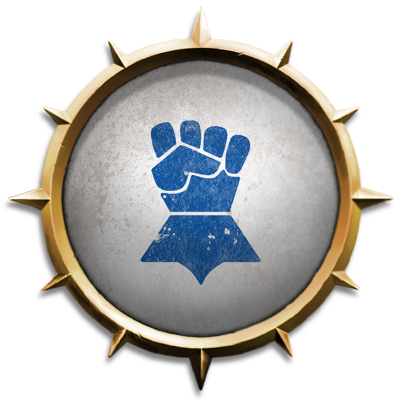 Having gone to the trouble of making that one, it was very easy to adapt it for other marine factions within the group... 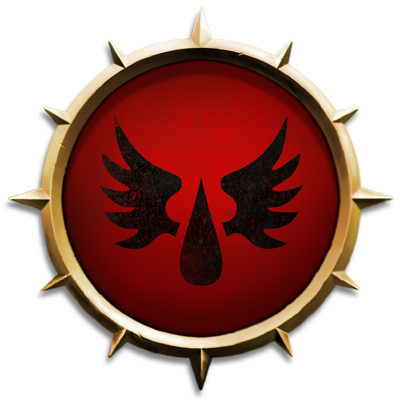 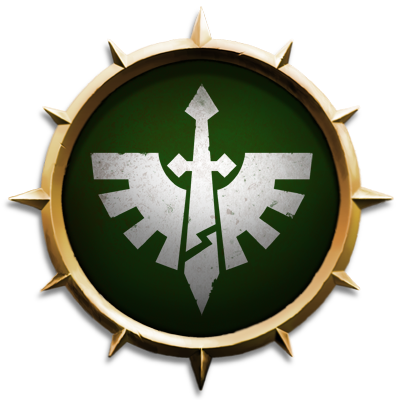 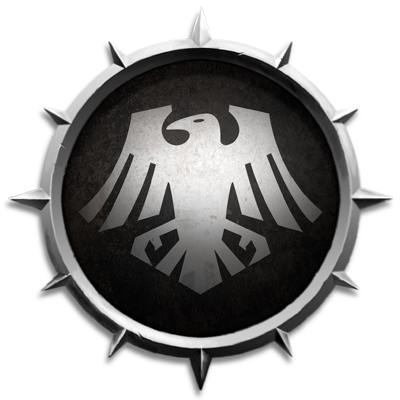 ...although additional work was required to make something suitably battered for Harvey's grimdark Black Templars: 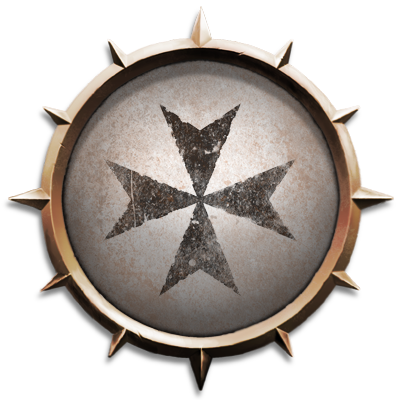 ...and then I started thinking about non-Imperial factions, for whom this iron halo-style-thing didn't really seem apt. And that, ladies and gentlefarts, is when the fugue fell upon me.
Painting a whole new frame, of a more complex shape, was a hell of a time sink. Friday evening, Saturday afternoon, Saturday evening, Sunday morning... I know that was the time involved in making this, because those are the timestamps in my WhatsApp conversations. I wasn't particularly aware of the time when it was happening (or leaving, as time does).
Some time later, I emerged triumphant, with ONE WHOLE icon for Tom's Iron Warriors. Here's a series of captures of the work in progress:


Now that I have the frame, it will at least be that much easier to make something for the other Chaos factions we have in the group. But what happens when I need an icon for orks? Or eldar? Or Tau? Or Necrons?
Another fugue. That's what will happen. When and for how long I cannot say, but I'll enjoy it, and it'll serve almost no purpose whatsoever. Maybe that's why it's called a hobby.