Waaagh! What is it good for? 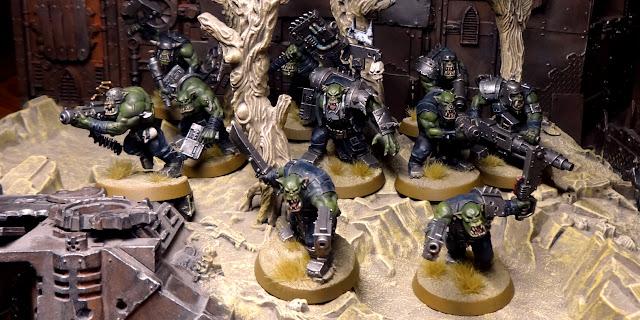 To avoid the classic 40K problem of Imperial armies constantly fighting each other, the players in our group make a point of having at least one non-Imperial army. For years, I've been using my Speed Freaks for this. I'm still proud of that army and its many trukk conversions, but I've played them so much that I need something new. Something really different, you know? So I've decided to do... another ork army.

It was almost Drukhari, and it was almost Tyranids. With all the new Craftworld stuff coming out, my teenage years of precision elf bullshit almost had a renaissance. But the new ork boys are just so. goddamn. PRETTY.
The added benefit of orks is that they feel like a nice, classic enemy that can be anywhere, for no reason, and fight anyone. Absolute peak carnage enabling, that. The other thing about doing Goffs, rather than Evil Sunz, is that it's thematic to have a more varied force that doesn't get quite as obnoxiously in the enemy's face in turn one. This means it's easier to build an army that's fun to fight against, which my Evil Sunz bikers kind of aren't. Hence: new balls, please.
I've picked up an Ork combat patrol box to start me off, and came up with a paint scheme that's fast, by my standards at least, while still hopefully looking OK on the table. I'm fairly happy with the results; they look a little murky from two feet away - hard to avoid unless you're going for neon green skin - but the metal catches the light nicely. For just over an hour per ork, the tradeoff is acceptable.
The painting method will be covered in a future article when I've got it more dialled in; for now I've just done the test mob, and the Cobalt Scions project taught me that I'll find refinements down the line. The basic method, though, is to drybrush almost all the colours over a basecoat of burnt umber. This softens all the colours somewhat and means I don't have to get every last nook and cranny, since the drybrushed colours don't have hard edges to them. Some traditional brushwork on the faces, teeth and metal highlights help add sharpness after the fact. 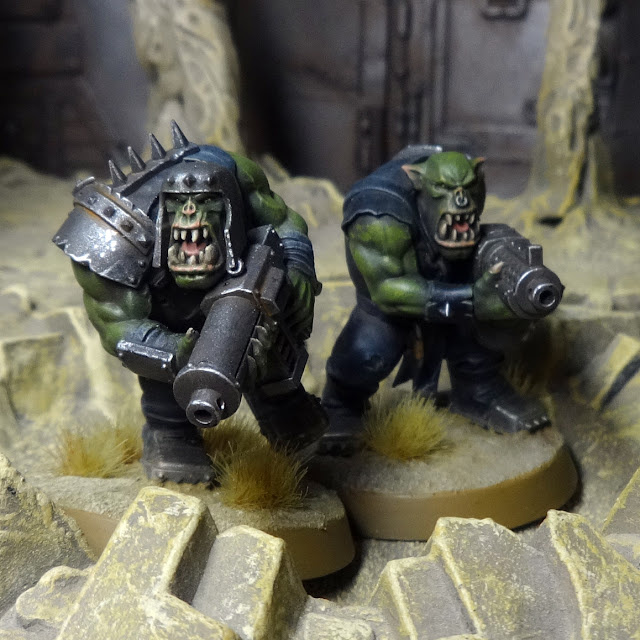 Goffs allow me to mock one of my greatest loves: heavy metal, and its various subgenres. This is a speed project, so I won't be going crazy with conversions to turn everyone into Goff Rokkers or whatever, but the lore will essentially split each mob of the army into a subgenre of hard rock/metal, headed up by a warboss who believes all subgenres have their place... and that place is touring the Eridani Sector looking for a scrap.
This first mob, Wamm's Rokkers, are proponents of Klassik Rok. These are your traditional Goffs. They've got no time for clothing that isn't black, and enjoy two things: drinking grog, and a good, long, bracing charge straight into the teeth of enemy gunz. Future mobs could cover the equally valid contributions of Deff Rok, Speed Rok, Progressive Rok, Djent Rok, and so on.

There's some big pros and some big cons. The pros: the new sculpts are stunning. Not too cluttered with detail, much better anatomy both in proportion and execution, far more dynamic... they look fantastic. They also do a reasonable job of hiding the joins, although there are still some you'll want to file/fill as needed, but overall pretty painless. The push-fit also works much better than older iterations of the format, to the extent that I didn't even feel the need to remove the locator pegs to avoid gaps like I would on an older push-fit kit.
The cons: they're extremely mono-pose, meaning repeats will be pretty damn obvious. The mass effect will still be fine, but yeah. It also means that a box of 10 orks is actually 9 orks and a nob, which makes building bigger units a faff, and possibly mandates buying a spare box if you're starting your ork collection from scratch. 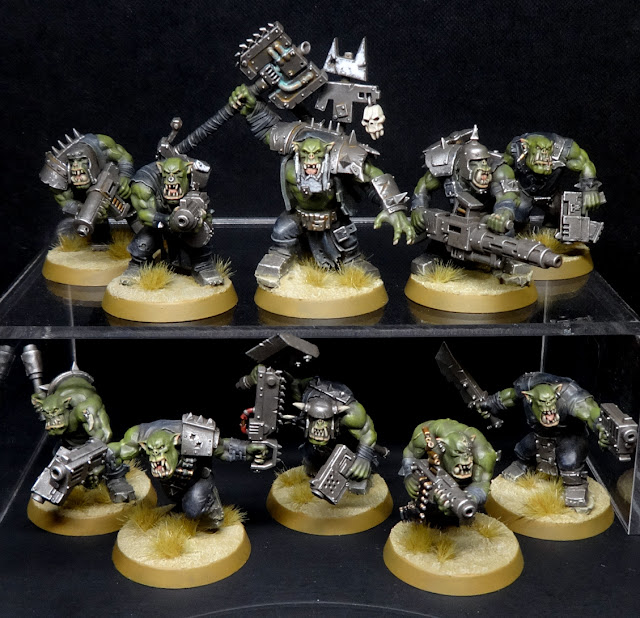 I'll be interested to see if we ever get a klassik multi-part kit, but since these aren't space marines I have a nasty feeling this will, like the necron warriors box, be it. For something as regimented as necrons that's not a huge problem, but when a nob is a third bigger than a boy and units can be up to 30 strong, that's more of an issue.
That gripe aside I'm thrilled with the new lads, and they were a joy to paint. Which is good, because I'll need to paint another, you know, one or two.