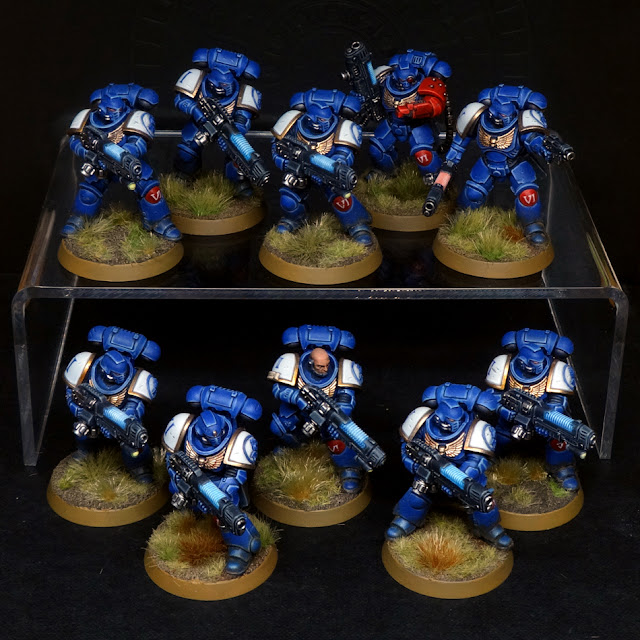 After decades of hobbying, I have become psychologically conditioned to get unreasonably excited by the prospect of owning a complete Battle Company of Space Marines. Because I am a big brain clever man, I am pootling towards this long-term goal with a paint scheme that takes 5-6 hours per dude. In pursuit of this foolish vision, I have rounded out the hitherto five-man Squad Castus with a second combat squad.
The stock kit has quite repetitive posing, with 4/5 dudes on the sprue in classic firing positions. I don't mind this - the pose looks fine en masse - but I felt the urge to add some visual interest to the squad. First, and least interestingly, one dude got a gold skull on his helmet to denote the combat squad leader.
Mildly more interestingly, I built a guy to be firing his sidearm while his overheated plasma gun cools down. This presented a bit of a painting conundrum. Plasma guns are generally depicted as having some sort of translucent casing over the top of the gun, because glowy shit looks cool. If you're sensible like Jeff, you paint them as a copper heatsink instead, but I do like that bright blue. When it came to an overheat, some firey oranges plus a glowing barrel would have communicated what I was going for, but blue flames are hotter than orange ones, right? I got very in my head about the different ways of representing it before finnally hitting f--- it and just slapping a red glaze down like it's a warning light that'll switch back to blue once the plasma chamber isn't going to rupture. SCIENCE GUN. 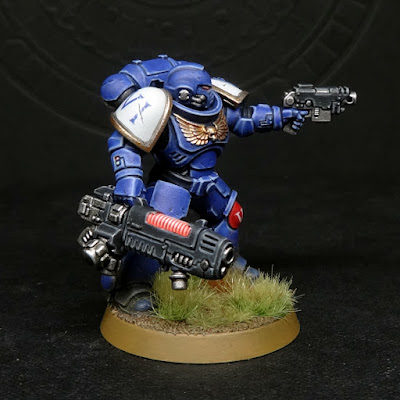 Most pleasingly, I added a tech adept to the unit. I've added adepts of several flavours to units before, and I really like how it communicates specialisms without needing any rules.
This particular tech adept was made using spare parts from the servo-turret techmarine. I had them lying around after building an automated turret, so the helmet and backpack were repurposed here, and a left arm stolen from the intercessors sprue. I used a studded shoulder pad because I am a coward and didn't want to freehand a Mechanicus symbol. 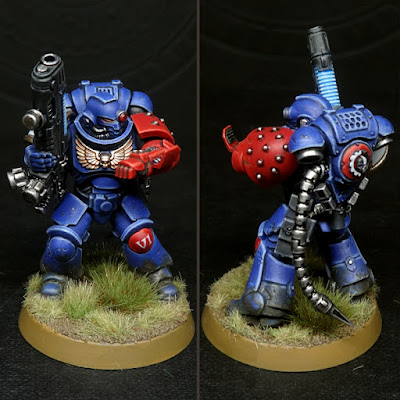 Given that a unit of 5 hellblasters costs 165 points, I can't imagine I'll regularly use the full squad of 10 unless it's a bigger game. This does rather raise the question as to why I painted them. As my Cobalt Scions force approaches 3000 points, it's transitioning from an army to a collection. I remember I used to scoff when, as a retail staff member, I was told that some nerds' primary hobby focus is collecting miniatures. Preposterous! Who buys things just to have them?
Well.... I find myself in a glass house here. I find an army more satisfying when I have collected all of [arbitrary organisational size]. GW are wise not to have Astartes platoons being a thing, since I felt happy to stop my mechanised Guard once I'd collected a complete platoon. But Space Marines go straight from squad to company... so here I am, a happy little dork, collecting and painting miniatures beyond the confines of use and well into the confines of admiring a collection in the cabinet.
This has made older Charlie marginally less judgmental than early 20s Charlie.
Marginally.
I still have strong feelings on buying things that shall forever remain in their original packaging as a """collector's item."""
Anyway, with this latest batch of minis, painted mostly so I can say I have all of the 3rd Company's 6th Squad, I cannot deny: collecting is, legitimately, part of my hobby alongside painting, gaming, writing, and illustrating.