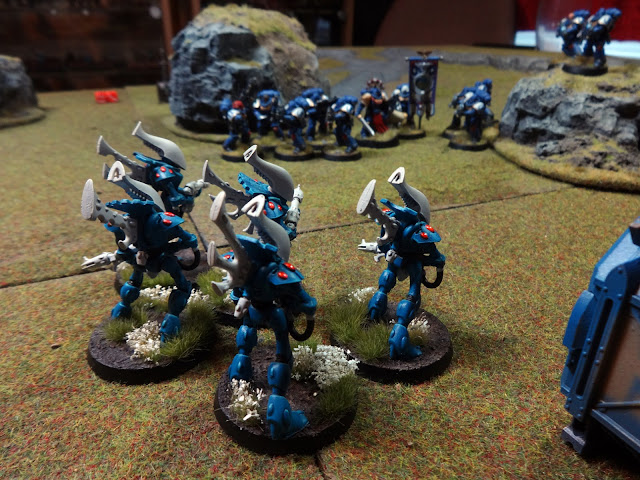 Agendas are central to 40K Crusade, and Crusade is central to the Beard Bunker’s 40K experience, as is pretty obvious to regular readers.  It is our jam, marmalade or other sandwich spread of choice.  There are many Agendas to choose from, but despite this we normally see just a few used over and over again. In today’s post, Tom and I are exploring why that is, and why we like being rewarded for doing things beyond the winning the game and killing the enemy.
GW has grouped Agendas into some incredibly intuitive categories such as “Purge the Enemy” and “No Mercy, No Respite”, but largely they can be grouped into two different camps. Spoilers: both of those camps have their place, but one is more fun than the other.

Category 1: Getting XP for things you were going to do anyway

Tom: Simplest in this camp is indisputably “Reaper”; gain 2XP for the unit that destroyed the most enemy units.  This is probably the Agenda most easily guaranteed to succeed, but there are lots of others in the flavour of ‘gain XP for each unit you kill of type X’ or ‘pick a unit to gain XP if it doesn’t die’.
Know No Balance
“Know No Fear” is extremely Category 1.  It’s an Adeptus Astartes Agenda that is potent to the point of being broken.  A unit gains 2XP every time it passes a Morale test; you reset the count if you fail one.  Space Marine Sergeants have a Ld of 8, so you have to take at least 3 casualties to have even a tiny chance of failing.  Given that Crusade starts small, most Marine players have fairly small units to begin with.  A unit of 3 cannot fail its Morale test, and a unit of 5 almost never will.  Basically it gives you buckets of XP just for being shot at.
Ultimately all of these Agendas are pretty much story neutral, and consequently it’s largely a matter of picking whichever one you think will give you the most XP.  Occasionally there may be a narrative reason to pick one, say if your army was particularly unhappy with the enemy psykers after they gave you a savage drubbing you might pick “Witch Hunter” to show that you were specifically focussed on taking them out this time, but it’s still just rewarding you for doing whatever you were going to do anyway.
Which is fine.  It makes sense that units gain experience from just participating, indeed every unit that simply turns up gets 1xp and this will probably be the biggest contributor to XP in your army overall.  Absolutely fine, but not that interesting.  I’d expect to see at least one or two of these in every game, but they don’t tend to add to the story much.

Category 2: Getting XP for things you weren’t going to do anyway

Tom: This is where you get to add more narrative juice to the game.  We’ve used the Agenda “Scry Battle Plans” on several occasions to directly swing the narrative arc of a scenario (most recently the Cobalt Scions did it to the Word Bearers to find out why they were on Lachesis).
A lot of these are of the type ‘do an action in this place’, but there are also some ‘be in this place at the end of the battle’.  When playing Andy’s Necrons with my Raven Guard in Beyond the Veil games I was a big fan of the “Uncover the Answers” Agenda, which had my Raven Guard trying to find clues to where all the civilians had gone whilst fighting off Necrons.  If I succeeded I gained Investigation Points which really fed into the narrative of my task force trying to learn what had happened to this world.
BUT, and there’s a big, twerkable butt here, quite often these can simply be way too hard.  Especially when you could be gaining the same or more XP for just killing your opponent.  Particularly in small games, and lets not forget that Crusade is supposed to start with small games.  We have played a lot of 500-750 point games (use points kids, it’s just better) in Crusade and having one unit going off to complete an Agenda can easily mean not using a fifth of your army.
For example the aforementioned “Scry Battle Plans” requires two successful Psychic Actions, which means at least two of five Psychic phases (it can fail, or be denied so probably more) it’s not doing anything else useful.  For some armies like Space Marines that don’t have many psykers, that’s a very expensive unit to not be contributing to the battle for half a game.  Naturally we in the Beard Bunker do like to punch ourselves in the dick for Narrative, and I refer you to earlier where I said we have used it many times.
On the other hand, with the right mission, they can become ‘getting XP for things you weren’t going to do anyway’.  If you combine “Breakthrough”, gain XP for ending the game next to the opponent’s table edge, with the mission “Guard the Retreat”, gain Victory points for ending the game next to the opponent’s table edge, you are back to generating XP for what you already wanted to do.  Fine, but not really adding narrative.
Let me break out of my established format for a moment and tell you a tale.  The world was Andaras, and Da Two Worlds Waaagh had invaded to loot and pillage.  The Cobalt Scions had rushed to the citizenry's aid, and began a running series of battles (or: Charlie and I were playing a series of linked Crusade games, whatever floats your boat).  Charlie picked the “Recover Gene-Seed” Adeptus Astartes Agenda to represent a captive we had previously taken that had escaped but was grievously wounded.
As his opponent, I got to pick where to place the casualty marker, and Charlie would get XP if his Apothecary could do an action on that marker.  Herein the dilemma becomes apparent.  If I place it right in front of him, he gets free XP (plus it’s a bit dull).  But if I place it too far out of his way, he’s going to ignore it.  Rescuing one Marine is not worth sacrificing the whole battle for.
In the end I got it just right, Charlie was torn, but he did go for it.  It drew his Apothecary out of the protective bubble, and exposed him to Ork firepower as he rescued the Casualty.  But Ork firepower is, you know, Ork firepower.  He passed the few saves I could inflict upon him and went away happy.
So basically, something something Goldilocks.  Agendas that ask you to do something a little different and add to the Narrative are great, but there’s definitely a sweet spot between too hard and too easy.  GW haven't done a great job balancing the Agendas either, which really cuts down on which ones people will want to pick.  That said, the folks over at Goonhammer have taken a crack at it in their unnofficial balance dataslate.  They’ve definitely taken a few good sounding but realistically too difficult narrative Agendas and tweaked them back into usability, as well as applying a well deserved hammer to “Know No Fear”.
We in the Bunker had also taken a slightly different, and slightly larger, hammer to “Know No Fear” in our house rules.  We have also added our own homebrew Agenda “Civilians in the Line of Fire”, which is all about rescuing, or possibly capturing, civilians.  We’ve playtested it and tweaked it a bit and I’m very fond of it.  I have particularly enjoyed playing it with my Guard, as it makes me feel like even if I get completely trashed in the battle I did my best and saved at least a few lives.

Tom's already talked at length about the merits of Recover Gene Seed, but the game he mentioned above was the first of several instances of my taking the agenda, and it became increasingly silly that I didn't have a marker for it. But since I built my apothecary Eudemus without him standing on a dead Scion, I had a spare dead Scion. There was one problem: the giant hole in his chest (normally that's where the "medic" plants his giant boot). Sensible hobbyists would add some rubble, but I saw an opportunity to have a crack at some sculpting. 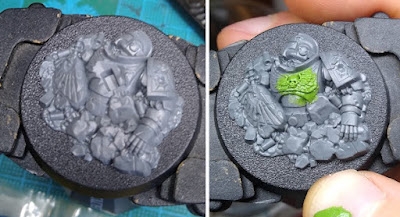 While the results are acceptable to me, there's a cautionary tale here: I've done enough painting and drawing in my life to know you're supposed to regularly hold the thing at arm's length to spot any issues with proportions. The Imperialis' skull is off-centre, and it really didn't have to be. I just got sucked into the detailing before checking the overall shape was fine, and by the time I noticed the issue I absolutely couldn't be bothered to redo all my work. While painting it I threw extra mud at the Imperialis to try and distract from my error, and had fun adding other details such as a small pool of blood around his neck. It was nice to have a little self-contained project to do, and I'm looking forward to getting it on the table... at a narratively appropriate moment, of course.
I guess ultimately where I sit with Agendas isn't wildly surprising; I love it when they result in the two players trying to do slightly different things to each other, and it's fun having a desire beyond simply winning the game - it can help a defeat feel like forward progress, something which Crusade is good at in general. Agendas that reward the units which do well are good for rewarding those units that do well, or at least those units that are lucky enough to finish enemy units off, but I'm extremely here for anything that adds to the story rather than simply reflecting it. When there's no contextually appropriate agenda that will do so, I find myself quickly defaulting to brainless ones like Reaper so that the mechanic just sits on the periphery as I slaughter my way across the tiny plastic stars. And that's OK, because - and this is the key thing - no edition of 40K is perfect, but 9th continues to be the most fun I've ever had playing this crazy game.

Dear reader, if you've done similar modelling projects for Crusade agendas, please drop links in the comments - I'd love to check them out and see if there's others that would be fun to make. Likewise if you've thoughts about which agendas work best in Crusade, do share.