Smelling a Whole Lotta Heresy on this one...

Greetings fellow seekers after forbidden knowledge! It's Word Bearer O'Clock once again on the ol' Beard Bunker (no rest for the wicked and all that). I've been painting more lads - yes I need more, shush you - steadily over the past few months but haven't been doing much in the way of photography. Well that changes today. We open our account with another fine mob of very dedicated lads and lasses:

It is a well documented truth that I have something of a Necromunda fixation. I adore the game and the world and to be perfectly honest want to paint literally everything produced for it. That having been said... as I already own an Imperial Guard Platoon's worth of Orlocks, 20 Goliaths and have designs on more... I am looking for other ways to use the models so my collection doesn't become ridiculous. To this end I recruited the ever-so-devout Cawdor cultists, ahem, gangers, to be my seventh cultist unit. The irony that the style of the very devoted in the Imperial creed fitting in so nicely as chaotic minions was not lost on me. I chucked on one of the resin upgrade sets to avoid the more overtly "Cawdor" elements and to get a heavy stubber up in the mix. 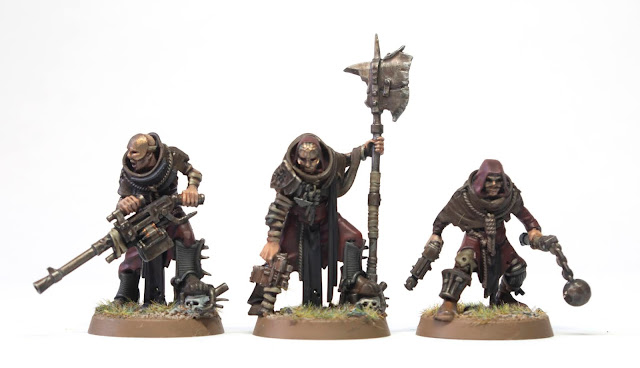 I didn't think the tonsured heads would work terribly well, so I tapped some of the aftermarket parts companies and Anvil Industries came up trumps with their masquerade hooded heads. They were far from a perfect fit and needed some green stuff shenanigans but I feel the end result was well worth it. As far as painting went, I figured I'd do what I'd done for a lot of the cultist units and have them in a Word Bearers red robe. Prevents friendly fire incidents after all. Everything else was just shades of shabby brown and canvas. The only bit of bling on the whole model was the tarnished bronze masks they all wear. As usual, the lore came to me while I was painting them, and who better to instruct us on it than our perrenial narrator, Orcus Kairon:

"I have to confess, while all servants of the True Gods are blessed and worthy souls, that crowd over there I do not trust an inch. They call themselves the Ragged Radicals. Started as some kind of ascetic coven from somewhere in the Iolan Reaches. They did a whole vow-of-poverty thing, give over all your posessions and assets to the cult, own only what you can steal, never show your face again from the moment you join. So they are simultaneously vastly wealthy and broken down. What bothers me is that they just showed up. They seemed to know where we would be, were confident that we would take them in rather than gunning them down for sport, and generally act with an assuredness of purpose that is a little disquieting. Most cultists when they meet us in the flesh are at least a little intimidated. Not this lot. I've tried throwing them off their game, changing their orders, throwing them into rituals. They just smile and act like it's all going to plan... they're up to something... I just don't know what yet..." 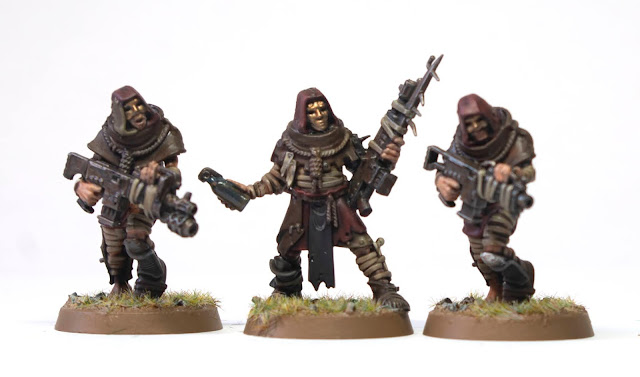 Well, with our favourite Sorcerer somewhat nonplussed, lets at least get him some friends he can rely on, right? Perhaps some more of his Legion brothers. 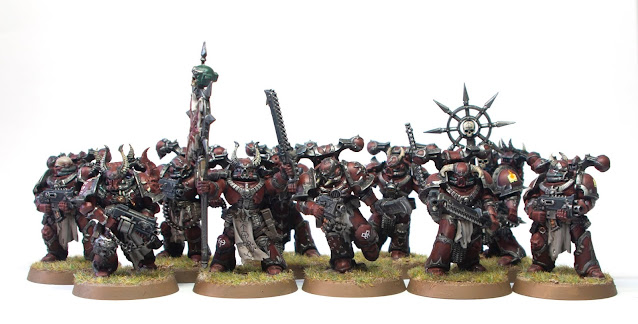 So what are these then? An oddly pious and underequipped squad perhaps? Nope! They are long anticipated reinforcements bolstering the existing 10-man squads and getting them up to their planned establishment strength of 15 each. 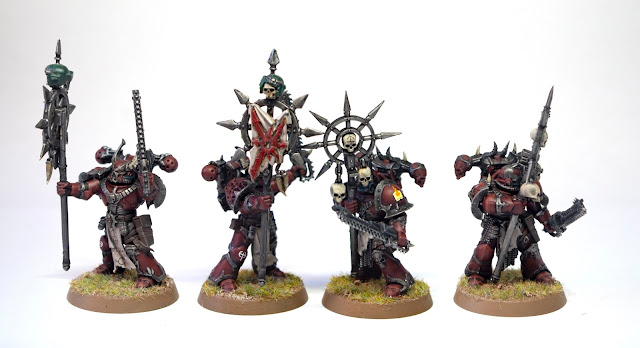 I have said more than enough about the basic painting of these chaps so I shall focus on the aspects that are a bit different. Namely, the icon bearers. Now, while GDubs have rather sensibly allowed icons to be little backpack mounted things, I feel that the Word Bearers aesthetic rather rewards the old school banner-style icons. Trouble was... while I had some of the old banner style tops from back in the day... I had no poles to put them on. The solution presented itself from my bits box: Grey Knight halberd arms. Yup. Not content with perverting the faithful Cawdor to the service of Chaos, I've pressed Grey Knight bits into service too! Buah, ha ha haaaaa. I also nicked a Marauder Horseman icon while I was in there so I'd have two different ones for the two squads. Turned out nicely I think.

And above is a picture of why I'm doing this. That is not yer daddy's Tactical Squad. Nope, that's 15 Chaos marines looking like they are very much here to stay. Imagine trying dislodge that from an objective, or worse, one barrelling toward your own held objectives... Plus, I like the bigger squads on the Chaos lads, they feel like little warbands rather than the regimented squads of the Imperials.

Anyway, that's enough for this update, lots more to come, Chosen are painted, as is a Dark Mechanicum and his coterie of Voltageist cultists. But they'll have to wait, so, until next time, lovely people.