First up, a mild apology (because I’m only mildly sorry): I’m a bit late with this post. Lately I’ve been aiming for one of us Beard Bunkerettes to get something up every Monday (that way we’ve had the weekend to do hobby stuff, and thus, something to write about the next day). Welp, I’ve been busy finishing the first draft of my novel. Hurrah! ...but this has prevented me doing much in the way of hobby. Boo!

So without further ado, I’m going to take a leaf out of Jervis Johnson’s book. He once wrote a Standard Bearer column in which he advocated the joys of thinking carefully about the layout of the scenery on your table so that it makes narrative sense.

If you’re not sure what I’m talking about, think back to going into your friendly local gaming store, or gaming club, or wherever. People often game on scenery that’s been randomly but evenly distributed around the board, as if the planet they’re on was created by a god with geographical Tourette’s.

Genuinely, I think people who lay their scenery out like this are robbing themselves of a measure of fun. We invest so much effort into making our models look good, but scenery often plays second fiddle. Now I don’t know about you, but I find a good setting often makes a story come alive, and even someone with well-painted scenery can still trip spectacularly over the last hurdle.

If you’re still not sure what I mean by Geographical Tourette’s, I’m talking about this: 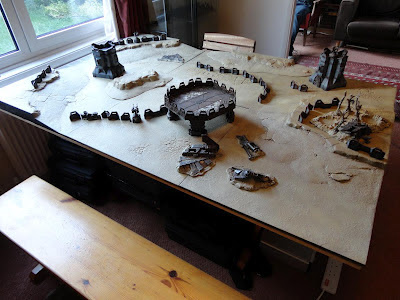 Conversely, if I take exactly the same pieces of scenery and think about how they might relate to each other, I end up with this: 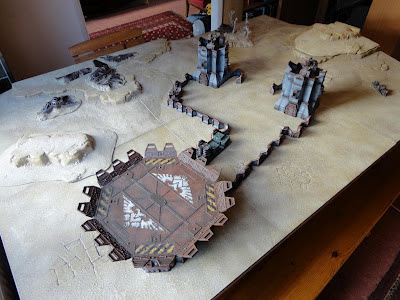 OK, fine, so I added some crates and barrels. The outpost needed to look a little more homey. I’m tho houtheproud. 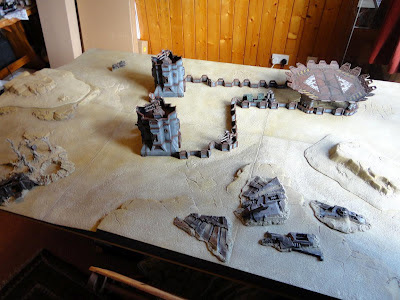 A less uniform distribution of scenery like this might have an effect on game balance, but personally, I couldn’t care less. It’s so much more evocative that, frankly, whatever. On more than one occasion, my opponent and I have set up the table first and decided on a scenario afterwards.

Whenever laying pieces of scenery out, I always consider their relation to each other. The hazard sign on the moonscape/burned-out Rhino is facing the outpost, warning Imperial soldiers to stay away. The Aquila Lander broke its back on the crest of the hill. The Ork buggy was speeding around the perimeter when it got flung on its side by the defenders’ guns, hence being parallel with the defence line. All the autocannons are facing the same way, as if still facing in the direction of their last target. There are places for sentries at the outpost’s entrance. The cargo is all next to the landing pad for easier loading/unloading. Despite the, er, lack of crane (I always did wonder about the practicality of the Aquila Landing Pad... pff, whatever, it looks cool). 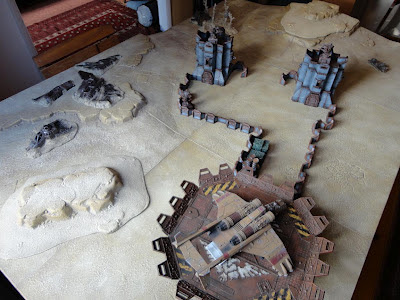 As an aside, Maisey almost gave himself post-traumatic stress disorder after painting the entire landing pad in Jeffrust. Good times.

Anyway, I’m off to paint more Trukks. And maybe some Grey Knights. Ooh, or some Imperial Guard. And some Empire, I haven’t poked them for a while. And... oh, bum grapes.