Now for something completely different – Yaaargh! 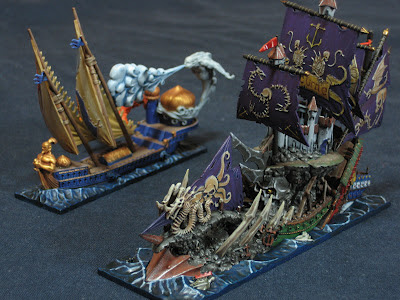 Aha! Caught you unawares – these aren’t Orks, tanks, rats or Ork-rat-tank-hybrid-walker-machines! These are in fact a couple of Dreadfleet ships.

I’ve been dabbling my toes in a bit of commission work for a colleague, and this is what he’ll get for buying me grog.
Here are my thoughts on the models, painting and some other general ramblings that have tangential relevance.
The good
Looking back on the old Man’O War ships, I have been astounded by how finely sculpted and well detailed these ships are. The Bloody Reaver in particular is a quite astonishing piece of work and it really looks like a floating collection of junk - which is a positive comment from an Ork player. 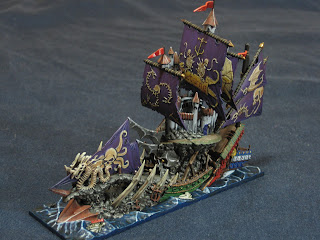 The Nocturne (I couldn't fit 'Bloody Reaver' onto the gap on the sail).
The Flaming Scimitar was very easy to put together. I’m quite fond of the opulent Djinn Palace look, but less pleased with the blowing wind sculpt coming out of the air spirit’s mouth. The fire Djinn looks ace – the thought of a sixty foot fiery sword crashing down onto an enemy ship’s deck just fills me with joy! 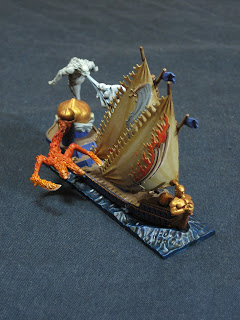 ﻿
I’m going to be reluctant to give the ships back as I’m quite happy with the way they look. Doubtless the taste of sweet, sweet grog will help ease the pain.
The Bad
Maybe it’s just my incompetence but the Bloody Reaver really was the ‘Bloody Will Not Fit Together’. I had to shave off parts of the starboard base to make it even partly fit.
More annoyingly, the main sail sits awkwardly right up against the main castle tower – which looks rubbish from the Starboard side. The highly ornate sail (the one that took ages to paint) is positioned right behind the main sail and is almost entirely hidden. These latter two problems are (I’m pretty sure) not my fault, and a little bit more thought during the design process would have sorted this out. Despite this - I do genuinely like the sculpt. 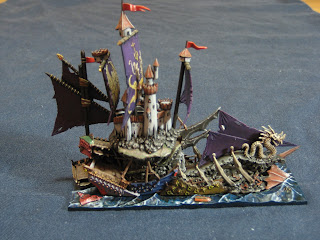 The Flaming Scimitar went together substantially more easily, the only problem being a mould gap on the smaller of the minarets. 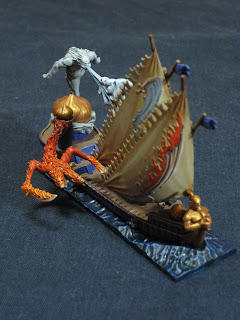 Artistic decisions
I decided to stay relatively close to the Games Workshop colour schemes on the Bloody Reaver. The main exceptions were painting the tops of the towers and other sections as rust. The shapes of the battlements on the castle walls were so reminiscent of the gates of Mordor, I decided to assume that they were made of cast iron that had been exposed to the corrosive sea air and paint them accordingly.
The colours of the sunken ships differ as well. I like to think that the rear ship on the Port side was a Bretonnian galleon.The Red empire frigate to the fore of it has had its brass finery corrode into verdigris. Finally, a ruined piece of boat next to the main ship got painted to look like a North Sea oil rig lifeboat. 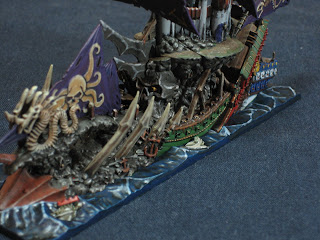 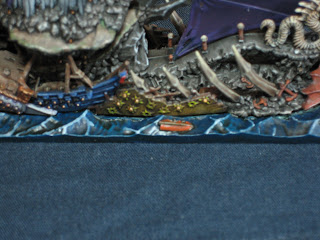 And roughnecks.
﻿
The flaming scimitar was again painted in a fairly stock manner. I left the sails a little darker than I intended when I realised that I was having huge amounts of trouble painting a decent flat layer of a light colour over them. After a narrow scrape with bleached bone, I left them the ochre colour. It spoils the overall look a little and it’s a shame that I didn’t quite pull it off.
﻿ 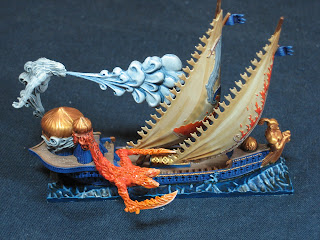 
1. Undercoating with white is brilliant! I undercoated the scimitar with white and the white coat did a large chunk of my highlighting for me! Painting a watered down colour over the white allows the white edges to shine through in a really nice way.


2. I’m really not good at doing areas of flat, pale colour. Partly this is because I so seldom need to – Orks and Skaven are so filthy and dark that it hasn’t been a problem for me for ages


3. Watering paints down is essential for good painting. I probably already knew this, but having to do loads of flat colour areas and highlighting work like the wave crests really re-enforced this for me.


4. As far as career choices go: I’m not going to be a commission painter. This project has taken me ages and I’m getting a bottle of grog for it. I could not live off this grog for the next three weeks whilst I paint something else. Also, I’ve been getting incredibly frustrated because I haven’t had the time to work on my own rats, Orks, tanks and Ork-rat-tank-hybrid-walker-machines whilst painting the ships.


So adieu, and I’ll post again in a bit when I’ve done something new or thought of a new way to talk about something old.


I do not hold myself to be any sort of painting role model. My Jedi brush skills are middling at best and constructive criticism is appreciated. Saying “Lolz, dat iz da wurstest paint work I’z eva seen, innit” is not.


Nevertheless, I thought I’d share the finished product with you (my adoring audience) before the ships sail away to blue pillow cases new.