By Jeff August 06, 2012
Greetings fellow beardlings, Jeff here. I am aware that I haven't been around the bunker for a little while but moving house does rather knock the personal hobby on the head! As a result I am delighted to present the first models of my brand spanky new Dwarf army!

Yup, the first models I paint for this army are a special choice, go figure! Truth is I love Slayers, even back when they really, really sucked. They just embody the fatalistic stubborness of the Dwarf character. For those who are not familiar with Dwarven backstory, a Trollslayer is a Dwarf who has suffered some great personal shame or committed some unforgivable crime or breach of protocol. They sing their death song, dye and shave their hair and beards into tallow stiffened crests and walk into the world. To all extents and purposes their life has ended and their kin mourn as such. They now seek out the largest and most potent monsters to face in battle. They do this to find peace in death. No Dwarf would kill himself but equally it would be an almost greater shame to fight to loose. As a result the most - or least, in a way - successful slayers kill their targets and move on to bigger prey. As a result there are ranks of Slayers, Trollslayers, Giantslayers, Dragonslayers and Daemonslayers.

See what I mean? Cool huh? Culturally the Dwarfs operate somewhere between a Japanese shame culture and Russian fatalism with a heavy dose of Saxon/Celtic imagery thrown in. These are also the first models entirely painted with the new paint range so lets check them out. 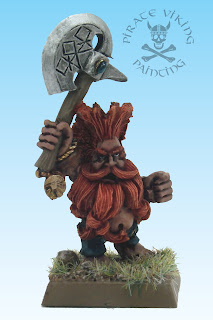 First impressions of the new paints are really positive, I just love how they make the metallics look. The flesh tone starts at Bugman's Glow - appropriately enough - and really is the first ruddy flesh tone that GW have got right. 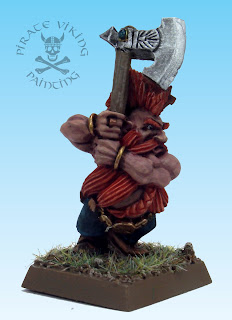 The hair is highlighted from Jokaero Orange through the appropriately named Troll Slayer Orange and Fire Dragon Bright up to Kindleflame - the new Dry compounds are very effective. I finally glazed the whole thing with Fuegan Orange. Makes a nice believable dyed orange rather than the radioactive oranges we used to work with! 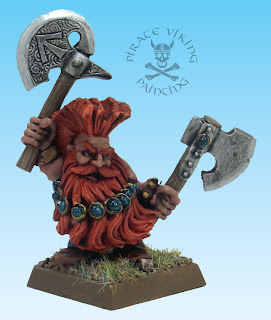 Barak Varr is the Dwarven sea port and where my army hails from. Thus all of the cloth and gems are going a turquoise-y blue-green to resemble the sea. This chap is clearly a rich and successful Slayer as sheer number of palm sized turquoises seems to suggest! Slayers tend to wear their wealth and have few needs beyond food, weapons and copious quantities of booze. 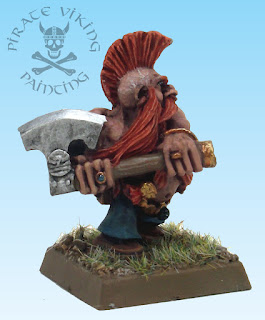 My slayers are a mix of the modern and the elderly, I have been collecting Dwarfs on an off for twenty-three (Christ) years. As a result I have a fair few Dwarfs knocking about. At a guess, painted and unpainted about ten thousand points. Until recently though I haven't been playing them as my previous 10 year old painted army was no longer of a high enough quality to grace my table. Hence the new army! The army is being made from my favourite Dwarf models from the last 20 years of Citadel sculpting. 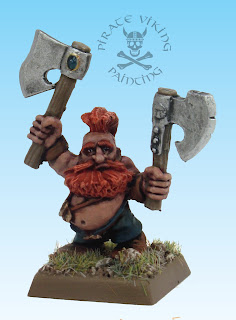 Always loved this guy, he's clearly a new slayer, the stubbly regrown beard and short crest, the mournful look in his eyes. He exemplifies the new minted slayer, still smarting from his loss, the more senior ones gain a veneer of cynical fatalism and confidence that gives them a bit more swagger. 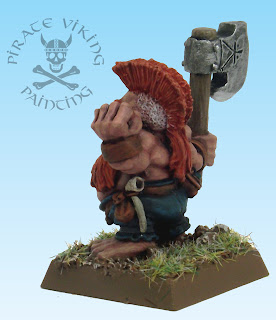 All the Slayers - indeed all the dwarfs - are covered in little characterful details that really make this army. Here, the little clay pipe and baccy pouch are an example, plus I can show off what a quick drybrush of Longbeard Grey does for the stubble on his head.

All in all, a promising start for my little Dwarf-y chaps. As has become normal for my army projects I've made a workometer and here is the Dwarf one:

Looks kinda empty of red doesn't it? Should be a nice fast transition though. Until next time folks...